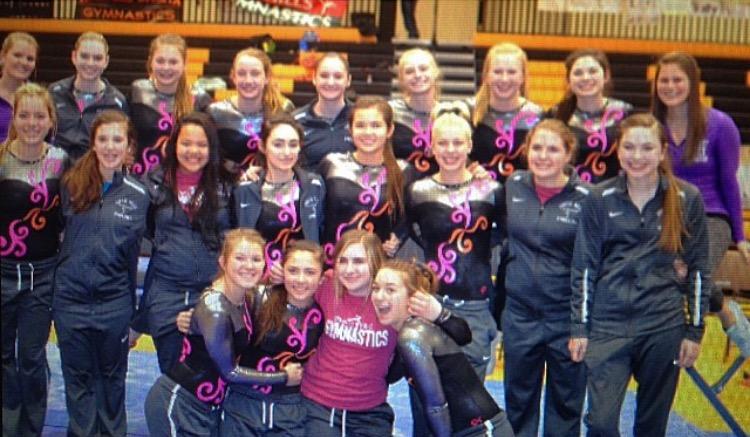 A year ago, senior Jocelyn Prinz received All-Region and Academic All-State honors. This year will be her last competing for the Forest Hills gymnastics team.

Last season, as part of the Rainbow Conference, head coach Lindsay Murray led her team to a 7 and 1 conference record. In the postseason, the team finished second at the conference tournament, second at the regional tournament, and second at the state tournament. The team is made up of students from all three of the Forest Hills schools. As a team, they return eleven gymnasts and bring in four new competitors.

Murray has set lofty goals for her experienced team. She believes that they are attainable if they live up to their potential.

“Our goal, as coaches, is to have our entire team qualify for Regionals,” Murray said. “Our team goal would be to earn a spot to the state tournament which would require a top 3 placement at the Regional Tournament.”

While Forest Hills has a lot of returning experience, they lost a few great gymnasts and a great group of seniors.

“We lost five seniors,” Murray said. “Cassidy Terhorst, Hannah Esterman, Ellie Siebert, Stephanie Logue, and Alexa Smith all graduated last year. These five were all vital in our success last year. Those ladies were key contributors in shaping our program into what it is today and have set a great foundation as to what Forest Hills Gymnastics is all about.”

A former national champion in synchronized trampoline, Jocelyn has proved that she is one of the best gymnasts in the entire country. This season, she is expecting to replicate her success of last year.

“I think this team has a lot of depth,” Jocelyn said. “The underclassmen have shown what they can do and the upperclassmen are really stepping up and taking on their leadership roles. I think as long as we work hard, we’re going to be around the same level as last year.”

Every year, it seems that Rockford is among the best in the state. Murray is pleased that her team is being compared to Rockford and also enjoys that they both represent the Rainbow Conference.

“Rockford continues to be tough competition in the area,” Murray said. “They have been the Team State Champions for the past two years. Between our team and theirs, it is some of the best competition in the state. We are lucky enough to have it in our own conference.”

Jocelyn is excited about her senior season, but she’s not ready to give up the bond she has developed with her teammates. She says her favorite part of being on the team is the friends she’s gained through gymnastics.

“I like the bond we all have together,” Jocelyn said. “I really like how we work hard to achieve our goals and the team comradery. It’s awesome when we get out there on the floor, compete, and hit our routines.”