Just Beyond is eight episodes of spooky lessons 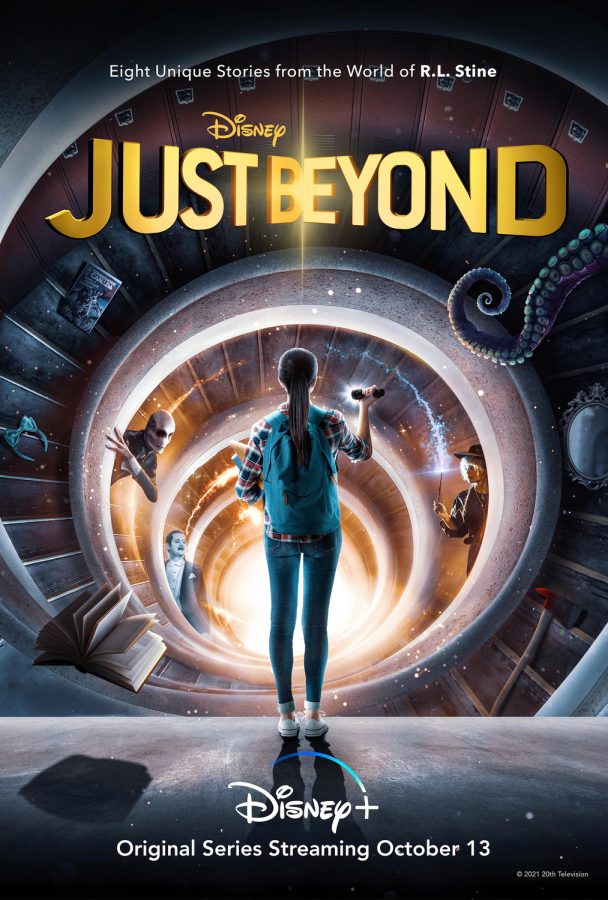 The over for the new Disney+ show Just Beyond

With Halloween being just around the corner, Disney jumped on the holiday spirit with a new spooky show.

Though a cute idea, the new Disney+ show—Just Beyond—is cheesy and unconnected. I couldn’t comprehend why Disney felt the need to make these thirty-minute episodes that have nothing to do with one another.

Each episode focuses on a completely new cast and monster. One episode is about an alternate dimension and another is about a family of witches. Each new monster came with a new surface-level life lesson. The witch episode was about accepting yourself and not conforming to society, and the episode about the alternate dimension was about appreciating what you have and moving on with life. Though important lessons to learn, the Disney+ series put no effort into having their characters learn these lessons through a deep or thoughtful process.

This new Halloween show put its whole budget into special effects. There was no shortage of crazy alien spaceships or whirlwinds. Though the effects looked cool, I wish they had focused on making the characters actually learn lessons.

I understand Disney wanting to put out something new for Halloween as it is known for Halloween movies, such as Hocus Pocus or Halloween Town, but Just Beyond was not the film I was seeking for the spooky season.

Though it kept me slightly entertained, I found it to be annoying. Each character fit some sort of stereotype. One episode focused on a high school girl who was very smart, but she prefered being pretty. She “learned” that it’s better to be yourself and smart rather than pretty. In reality, this showed girls that you have to pick one, looks or smarts, when in real life you can be both. This episode was a replay of the stereotype that all girls care about is looks, and that people hate smart kids. One of the biggest stereotypes in every episode was the “weak nerd”—the smart kids who get bullied and aren’t accepted by their peers. This is overused in all Disney shows, and an outdated and overall harmful stereotype.

I was looking for a cute Halloween show to pass the time, and that’s almost what I found in Just Beyond. The new Disney+ show shoved “life lessons” down my throat. I wanted to enjoy the show, but I found it to be far too cheesy.

Each episode brought something new to cringe at—I paused the screen every time a bully had a line. Every episode of Just Beyond was chock-full of bullies because that’s the only way for people to learn a lesson, to get bullied—or so the shallow Disney show seems to believe. I understand people get bullied everyday, and that it is a serious issue, but this Disney+ show nearly romanticized the idea of getting bullied or being the bully. There was even an episode where the main character was a bully. In that episode, the bully finally learned their lesson; however, it didn’t actually show the main character change.

Just Beyond is definitely a Halloween show, filled to the brim with monsters, but I would not make it a seasonal watch. I’m glad the show was only eight episodes as I’m sure I wouldn’t be able to handle another episode of the stereotype, “life lesson,” and bully landfill.