Kimberly Anderson strives to combine ASL with all of her passions 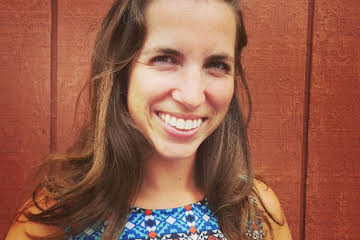 “We have Deaf Awareness week,” Anderson said, “[and my junior year,] I got asked to perform this bike story [in ASL] because I had done it in class that week, so I signed the story about crashing my bike. I didn’t learn how to ride a bike till I was 20—and I actually lost three teeth.”

Anderson told this story during Deaf Awareness week while she was still a student at CMU. Deaf people and ASL students alike came to a public event held by CMU to watch Anderson sign her story.

“That’s how I got my name sign,” Anderson said. “[It’s] this ‘K’ swiping out my teeth. And that’s literally how the Deaf community knows me up there: ‘bike story girl.’ It was really cool—just that confidence and being accepted into the Deaf community. I was like, ‘This is something I can do.’ I loved it. I was just good at it, and it was easy for me. Something I was really good at was storytelling, and that’s kind of what I became known for. The Deaf community, the professors, and everyone on campus knew me as this girl who signed the bike story—that was my claim to fame. I was like, ‘This is actually something I could do for a living.’ And it’s sad that I didn’t find that until my junior year of college. I’m really excited that I get to give people the intro [to ASL] in high school and make them aware [of] it.”

Anderson originally took an ASL course because her father was beginning to lose his hearing, but as the class progressed, and as the teacher found out she was an education major, she stuck with the language. Because she was the only person that year with any plans of getting an education and an ASL degree, both Anderson and her teacher saw the perfect opportunity for her to teach ASL.

“I don’t want to say [I’m] a success story,” Anderson said, “but 90% of sign language minors at Central are Speech Pathology [majors]. So they use sign language [to] try to work on communication disorders. They like to bring me back because I’m such an outlier. Almost every year, I get called to do an interview during Deaf Awareness week; I held one this year virtually. I think I had like 40 kids come on Zoom and ask me questions. They were interested in my path to get here and what advice I had and what I see a need for.”

Because of her close relationship with CMU and the fact that she regrets not realizing she could make ASL a part of her career until her junior year, Anderson is working to make her high school curriculum the best it can be for her students that have found a passion similar to hers.

“I’ve been working together with [CMU] to schedule a trip where I can take my kids up there and actually watch a class and see what it would be like,” Anderson said. “Because, like I said, it’s so special that we have an [ASL] program. Eighty percent of the kids taking sign language up there have never seen it before. And I think it would be really cool and inspiring for my kids to see how good they actually are—I don’t think they know they are. They’re doing stuff that I did as a third-year college student. Junior year was when it was like, ‘Well, they’re actually telling me I’m good, and I can actually consider this as a job.’”

Anderson originally envisioned herself teaching younger kids and was majoring in kindergarten through eighth-grade education while she was at CMU. But upon getting a job here at FHC, she realized that she could incorporate the best parts of primary education into secondary education.

“Yes, [I teach] high schoolers,” Anderson said, “but the vocab and the lessons I’m teaching are elementary; I’m doing a color lesson, [and] we learned Brown Bear, Brown Bear, [What Do You See?]. We do art; we do crafts. I get to do some of those really fun things because our vocabulary is so young still. I think that’s what makes me a really unique teacher because I’m able to put a different spin on lessons and make them a little bit different and change them up.”

On top of focusing on ASL while at CMU, Anderson decided to try and cram her schedule full of as many different clubs and opportunities as possible. She joined the dance team, tutored people in math, and even built and raced Baja Cars.

“I built a car,” Anderson said. “It’s like a go-cart. You build it, and you go race them against other universities. And because I was the smallest one, I actually got to race it in some of the acceleration tests because they don’t want any weight in the car. I got to travel [the] United States driving this car which is really cool.”

Besides building cars, Anderson also joined the science club. Because of her major in education and her parents’ affinity for yard work, she already possessed all the skills needed to work in the greenhouse on campus.

“My parents were very into yard work,” Anderson said. “We’d have to clock our hours doing yard work outside. So when I got to college, I noticed they were looking for summer help, and it was like pulling weeds and spreading mulch. I was like, ‘I’m your girl. I totally know how to do that.’ Then they found out I was an education major. So they brought me into the actual greenhouse and were like, ‘Will you make us signs for all of these plants?’ And I was like, ‘Yeah, sure.’ So I would teach people that came in about the plants in the greenhouse.”

While working in the greenhouse, one of Anderson’s jobs was to create signs for every plant that had a home there. They were created with the intention of helping to educate the people that visited the greenhouse on what each plant was and their needs to flourish.

“I was telling [my students], if you go to Central, my name, as of last year, was still on a lot of the plaques up there,” Anderson said. “Having that greenhouse job is what got me a lot of my jobs in the summer because I had that experience of growing all the plants year-round and working on stuff like special varieties and propagating.”

Not only did Anderson spend her time at the greenhouse on campus, but her roommate’s family also owned a blueberry farm that she would help out at in the summers.

“Every year, for Blueberry Festival, I would go down and help sell blueberries,” Anderson said. “I’m selling you like 13 kinds of jam; I love it. I’m really good at what I do; I used to work at a greenhouse, so I can teach people how to plant blueberry plants and the proper care for them. They keep having me come back every year because they can trust me down there to do those things. I [even get to] ride the harvester during parades—I get to go out there and wave at people, which is kind of cool. I’ve seen a couple of parents down there, which is really weird. They’re like, ‘Oh my God, what are you doing here?’ I’m just selling some blueberries.”

While Anderson helps harvest and sell blueberries during the summer months, she also helps down in the bogs once October hits. While working with both the cranberries in October and the blueberries during the summer, Anderson utilizes her knowledge of ASL to include everyone when she is teaching visitors about the proper care for the different fruits.

“Like the Ocean Spray commercials, [I get to go into the bog],” Anderson said. “It’s something unique and fun that a lot of kids don’t know about. When I was in an elementary position, I would teach them all about cranberries. It’s just a fun experience and something I like to do; I get to use ASL. I have had some deaf people come up, and I do get to sign, which is really cool. They make it known that I do know sign when I’m down there. So that’s pretty fun.”

While Anderson has passions that range all over the spectrum, she always finds a way to tie ASL into everything that she does. From teaching conferences for students at CMU to signing with visitors at the bog, Anderson has carried her passion with her ever since she first began learning ASL.

“I never envisioned I’d be doing what I [do],” Anderson said. “I always thought of teaching sign language as maybe a job I would do after I was sick of elementary teaching—as I got older when I had less energy. But I am very proud of what I’ve done. I hope that when people look back on their sign language experience or the program that the school has, they understand how special and how unique and how lucky they were to have it. I’m not just teaching a language. I hope they understand I’m teaching more than that. I had a professor, and she said ‘The more people that take my class, you are one more person that my daughter can talk to.’ If I can do that for my kids, that makes a hundred more people that a deaf person might encounter and be able to communicate with.”