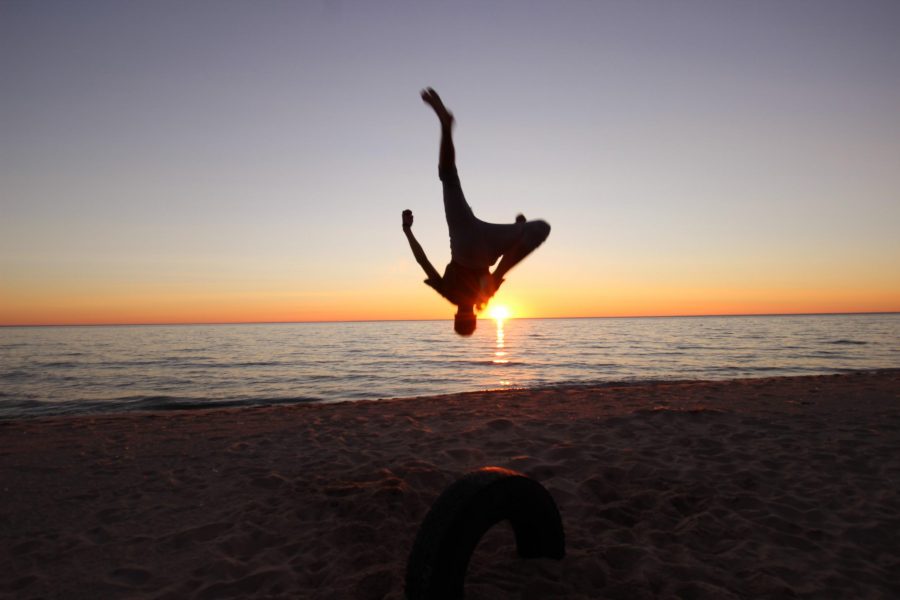 A familiar face in FHC athletics, sophomore Ryan Talbot has been seen competing in numerous sports. Spectators have watched him running on the track for the past three years, and this year he will also be a new addition to the FH Swim and Dive team. Ryan also privately practices parkour, which has inspired him to make his debut on the diving board.

“It all started when I told the diving coach, Alex Otto, that I was going to get this kid Ryan to join the team; I promised him,” Ryan’s friend and teammate, sophomore Charlie Krug, said.

Ryan does parkour, which he essentially describes as “basically jumping around on stuff; moving throughout the city as fast as you can over obstacles.” Parkour is an extremely dangerous sport and requires an abundance of skill. One who competes in parkour must be agile, fit, and know how to do numerous tricks, including flips. Ryan’s peers knew about his parkour endeavors and thought his skills would be put to good use on the diving board. Charlie, one of the many people who saw Ryan’s potential, put it into action and got Ryan onto the team.

“Parkour has helped me a lot [with diving],” Ryan said. “It helps me know where I am in the air, and I can flip easier.”

Ryan started doing parkour about three and a half years ago. He stumbled upon a video of a man doing parkour on the Internet and he knew that he had found his calling. He saw more and more videos and aspired to be like professionals such as Jason Paul. He took his newfound passion into action and found a gym that was giving lessons. Parkour is normally done outside, and Ryan likes to go downtown. While the main goal is to perform outside, Ryan practices and takes lessons at Aerials Gym GR.

Professionals also take part in big parkour competitions. While Ryan is not to the professional level, he still takes part in competitions. Ryan most recently won in his age category at a competition hosted by his gym.

Parkour is not all fun and games. It is known to be incredibly dangerous.

“One day you can be fine and the next day you could be in wheelchair the rest of your life,” Ryan said.

Ryan has had multiple minor injuries during his career, but he has had one major injury. One time while in the gym he did a flip and landed on his neck. He had to be in a brace for three days, and he was not allowed to do anything for the rest of the week.

“My mom and dad are very supportive,” Ryan said. “My mom just doesn’t like it when I get injured.”

It is important for people interested in Parkour to know that research, training, and time are key. While Ryan still spends multiple hours a week at the gym, he has mainly been focused on training for the upcoming dive season. He has been going to the pool everyday of the week except Sunday and dives for three hours, doing over 100 dives each day.

“Ryan has been getting really good really fast,” Charlie said.

Ryan will be competing for the first time at this Thursday’s Swim and Dive meet at the Aquatic Center. The swim team has already been off to a great start this season, including winning the Cereal Bowl, which Ryan was unable to attend due to a parkour competition.

Like Charlie, many teammates are excited to have Ryan join the team, including co-captain, senior Mitch Miller.

“In the early stages of the season he is showing great promise as an impactful and reliable point scorer,” Mitch said. “He has easily transferred [his parkour skills] onto the boards. I believe that he will become a legitimate contender even as far as the State Meet in upcoming years, if not even this season.”

So far, Ryan has enjoyed this season and the new challenge. Many of his respected peers are very excited to see what his future holds. Whether it be on the track, downtown, or on the diving board, he has shown exceptional potential.

“In the parkour community, everyone is your friend. But being a part of the swim team is like being in a huge family,” Ryan said.