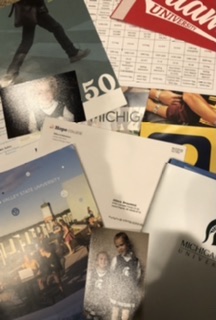 The insane amount of papers and pressure that come with college

I feel as though I am still young. I still have childish problems. I still need help from my parents more often than I would like to admit. Although I like to pretend I am always the responsible one, deep down there is still a rambunctious child inside of me who occasionally likes to make an appearance.

But for some reason, as a sixteen-year-old, I am already expected to know my future. Even though I receive a mixture of responses when I tell people I don’t know what I want yet—one of them being, “That’s alright, you still have time”—the main one is them awkwardly nodding their head while I scramble for an answer.

I assumed that the questions would start later on—maybe not even until senior year. I ached for more time alone with my thoughts and feelings before I had to know who I wanted to be. I needed a few more months, but real life doesn’t account for curious people.

When people ask these daunting questions, their intentions are pure. They simply want intel about your life, or they are trying to connect with you in a way everyone understands. Little do they know that internally, I am screaming.

I feel as though I am simply a robot whose wires are fried from doing the same thing over and over with no real purpose except that’s how I am programmed.

I have been working incredibly hard for an extremely long time in order to reach a hypothetical goal that I always figured I would know later on in life. But now, later has arrived; the questioning came earlier than expected. I feel as though I am a fugitive sitting in court convicted for not being better prepared.

Sometimes, when I really focus, I think about different paths I could take. I have potential options in my head, but none of them are thoroughly researched enough to be viable yet. I have hobbies and interests, but nothing I confidently know I want to pursue. I know what kind of person I want to be, but I am unsure if I am taking the proper steps to become her. I am confused. That is the only emotion I am sure of when discussing this topic.

And as much as I would adore having answers to these ominous questions, what I really want is to stop being the robot that is fried, the fugitive that is cracking under pressure, the confused young adult with a brain that screams at her to do better, and rather just be the child who had “to be determined” dreams.