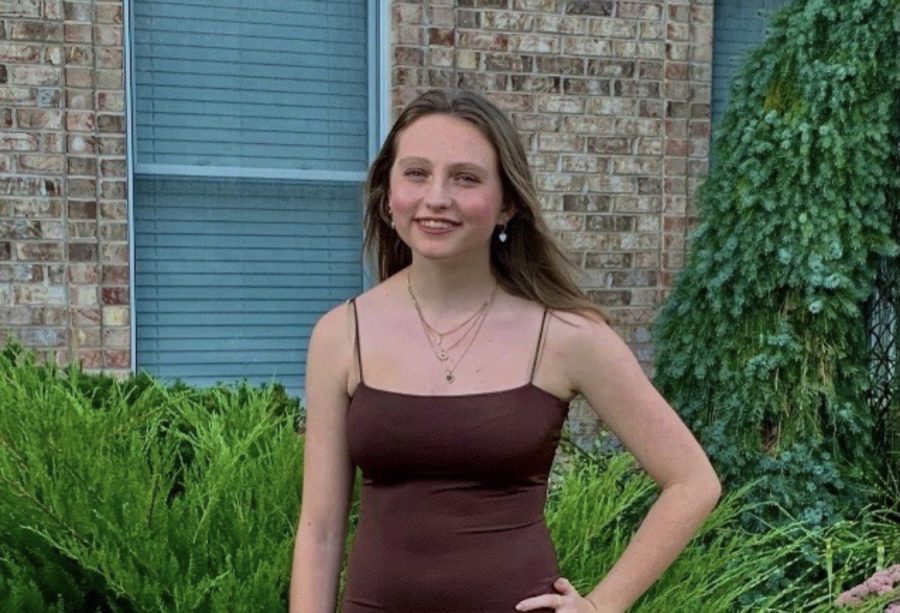 Grace Berlin is involved in student council, crew, and the environmental club

Grace would describe herself as someone who just likes to, ironically, sprint into new things at full force. Whether it be by herself, her parents, or her friends, she’s always been inspired to pick up an unfamiliar activity—that’s what interestingly started her short-lived career in track.

“If one of my friends ever suggests doing something, I’ll always be down,” Grace said. “When I was in 8th grade, my friend convinced me to do track. I’ve never liked running, and I’ve just never been a runner in general—I was so bad. But I tried it and got closer to people by being on the team; I tend to do things for more of a social aspect.”

Others would describe Grace as someone who’s extremely friendly and an adventure seeker, two of the best combinations when being thrown into something new. While running might not be her gift, she would have never known that if she hadn’t tried it.

Sometimes, people will see impulsive behaviors as a negative thing, but Grace sees it as the push she needs to find her passions in life. Freshman year is when the pressure starts being put on about college choices and career paths, and Grace can already feel that on her shoulders—she’s starting to think about what she wants to do with the rest of her life.

“Some people are born knowing exactly what they want to do, but I’m not one of those people,” Grace stated. “[This year], I’m trying out as many new things as I can so I can see what I like.”

Even in the two months since Grace has started her high school career, she’s signed up for the environmental club, holds a position on student council, and has even joined FHC’s crew team. While this can seem like a lot of extracurriculars for someone who doesn’t like to fill up their schedule, it’s the highlight of Grace’s day to leave school and participate in what she loves.

“I love going to crew practice,” Grace beamed. “Being a coxswain for my boat has shown me so much about my personality: I’m a person that likes to be in control of the situation and make it more positive. I’ve also found ways that work for me to keep myself calm under pressure.”

Grace always tries her best at whatever she’s been thrown into, but it’s really important for her to make new friends and enjoy what she’s doing.

“Part of the reason why I joined crew was because I heard it was a really good community,” Grace said, “and now, after being a part of it, [I] one hundred percent agree. I’ve met some amazing upperclassmen through it as well.”

Grace can name a variety of upperclassmen that have made her crew experience worthwhile and the highlight of her day—she’s especially gotten close with her fellow coxswains Katya Berjawi and Sofie Brown. They’ve both made such a positive impact on Grace’s fall season, and she couldn’t be more grateful.

“I would have never met them without crew,” Grace said. “I would say that Katya is one of my really good friends and that I love seeing her at school in passing. I’m also grateful for Sofia because of how helpful she’s been all season long; she’s given me so many rides to practice, and I wouldn’t be able to go without her.”

Grace not only depends on these girls for a form of moral support, but she also looks to them for inspiration for when she’s an upperclassman.

Recalling what her first day of freshman year was like, Grace found it intimidating to be new in such a big school, but she remembers how helpful all of her older sister’s friends were whenever she might’ve gotten lost in the maze that is FHC.

“I remember thinking that everyone was so scary and intimidating,” Grace laughed, “I was worried about them being older than me, but in all reality, they aren’t scary people at all.”

Whether it be people in her boat or out in the halls, Grace finds comfort in knowing that someone has her back while she’s starting new experience at every turn. Crew has been the main source of finding herself so far this year, but when she’s an upperclassman, Grace hopes to be just as impactful as those who have helped her.

“I’ve met some really amazing upperclassmen, which was something I was nervous about going into high school,” Grace said. “But if I wouldn’t have tried something new and gone into crew, I wouldn’t have met all of these great people, and I hope that I can be like them one day. When I get older and go up a couple grades, I want to be, to someone younger, such a positive influence like all of my new friends have been. It sounds corny, but at the principle of it all, that’s who I am: I love helping people.”