With the camaraderie of FHC crew, Nathaniel Hahn finds his passion in rowing 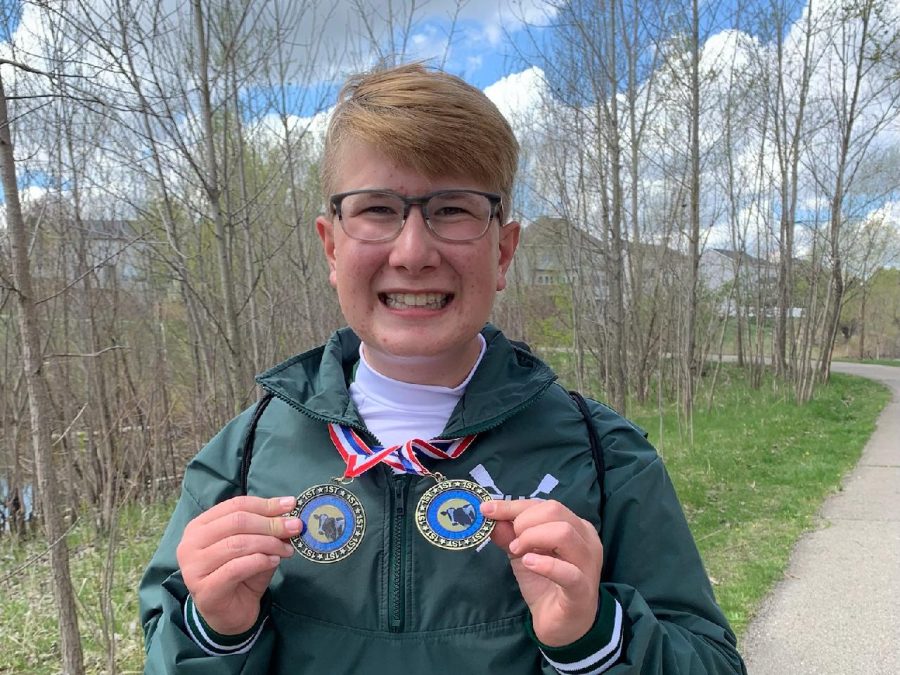 Sophomore Nathaniel Hahn, a proud member of the FHC crew.

Through the turbulence of exhaustion, sophomore Nathaniel Hahn can be found persevering alongside his rowing teammates. After grueling practices with his team, the bonds between Nathaniel and his friends grow even stronger.

Sometimes, the most unexpected times can turn into fun memories. During one practice, the boys were instructed to do wall-sits against the side of the boathouse. If any member of the team fell, then everyone would have to endure the exercise for longer.

“There was one practice that was right after our fall season,” Nathaniel said, “so our coach was crazy, and we had to do it for about three minutes. There was mud there, so we all started slipping off the walls. Every time someone fell, you’d have to add more time. [When someone fell], they’d be disappointed at first, but then they’d realize that you all have to do it together.”

The mental and physical challenge of this exercise eventually brought the team to realize that everyone was in the same boat.

While Nathaniel has a variety of interests such as music and history, his teammates in crew have made the sport his biggest passion. Originally, his siblings inspired him to become a member of the rowing team, and he recruited other friends to join him his freshman year. However, through the experience, he has made even more friendships that have a daily positive impact on his life.

“We’re all friends now,” Nathaniel said. “I get someone to talk to in most of my classes because there’s always someone I know now.”

His involvement with rowing has made him a happier person due to the people that he surrounds himself with. In the sport, there’s never a lack of friends and exciting memories. It has allowed him to spend time and bond with more people that he wouldn’t have otherwise known.

The friendships that Nathaniel has developed through crew have never been taken for granted. They have allowed him to push through both physical and mental barriers in the sport, always encouraging him to do his best.

In addition to the camaraderie of the team, he has also benefited from the competitive aspect of rowing. Nathaniel has had the chance to compete in multiple regattas, and every success feels different from the last. Even if the chances of winning a certain race are slim, the team is still all the more determined to succeed.

“We had one boat where we were all novices,” Nathaniel said, “and we were in a JV event. All the other boats had all varsity members, and we rowed the race and got third place, which was crazy because all of the other crews were supposed to be so much better than us. It felt really awesome because we didn’t know that we were able to do that.”

The welcoming community coupled with the extreme competitive energy makes crew all the more enjoyable. One of Nathaniel’s best memories goes back to the very beginning of his involvement with the sport. During his first race, his confidence grew after watching everything that could be accomplished when his team worked so well together.

“[My favorite memory] was when we won our first regatta,” Nathaniel said. “I was really scared that we weren’t going to do well because it was our first regatta and we didn’t know how we’d stack up against all the other teams. As a whole crew team, we only lost two races to Northern. So we thought, ‘This is awesome, and we can do this for the rest of the season.’”

Every win feels like an incredible accomplishment which only encourages Nathaniel to push himself further each consecutive race; however, the most rewarding aspect of FHC crew will always be the team. With them in mind, Nathaniel is able to push himself to the limits of success.

“You have to do this for the person in front of you and the person behind you,” Nathaniel said, “because you know that they’re doing the same thing.”