Happiness stems through the students while working in the cafeteria kitchen 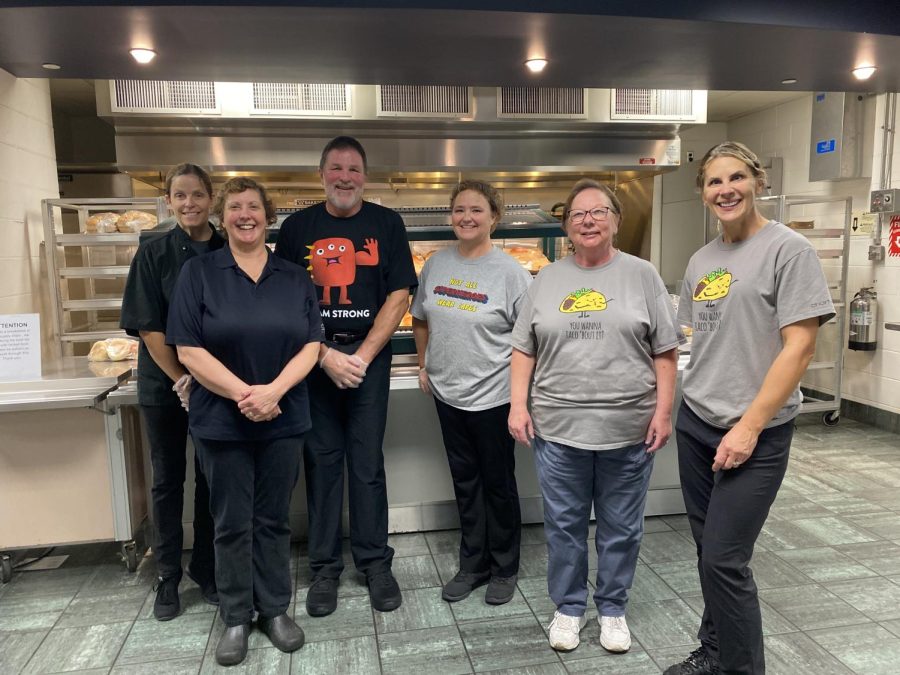 The hard-working lunch staff lines up for a group photo.

The school day, seemingly rather seamless, has a community working to constitute this everyday norm. Students drift through every day with this expectation of precision, but they barely understand the work that goes into this production.

FHC’s leading lunch staff member, Cindy Stanard, puts countless hours into preparing food so students not only have a lunch, but one that they enjoy as well. On top of presenting satisfactory meals, healthy ones are now offered for free in the school cafeteria.

“Feeding all these kids [is the most difficult part of my job],” Stanard said. “There were a few times when we almost ran out [of food]. We are doing [about] five-hundred fifty meals a day, which is a lot, and trying to figure out good food too.”

Feeding all of the students is a rather difficult task. As the lunch team works to tackle this challenging endeavor, they also face another one: students stealing food.

This challenge is one dealt with not only by the lunch staff but regularly taken one step further. In such cases, School Resource Officer Jim Svoboda finds himself involved.

This puts the school in a difficult position. Thinking this theft would be alleviated with the free lunch program, is this just a subsequent action of having food accessible to students?

Eight year resident of the lunch staff Jorel Couch can be found behind the grill preparing chicken sandwiches and fries. The only problem he encounters with the student body falls in line with the rest of his colleagues’ problems.

“Only the stealing,” Couch said. “I haven’t had any issues with anybody; I get along with everybody here [with] no problem. No issues, no disrespect. [I’ve] caught a few stealers, but, unfortunately, that’s going to happen.”

“I think, overall, I would say ninety five percent of the kids do a really good job [respecting the staff and cleaning up],” Svoboda said. “But, there are certain tables [and] individuals that continually make messes and not clean up after themselves.”

While students play their part in displaying respect and gratification towards staff members, Stanard finds true enjoyment granted by another group of people.

“I just really love my co-workers,” Stanard said. “We get along really well and have fun together.”

While working with one another for years, a rotating job circuit has become the regular. The lunch staff will shift from the register one week, and the next week find themselves preparing the freshly cut vegetables for the salad bar.

Working in the cafeteria mainly surrounds the idea of preparing food and working the line, but it holds more significance when dealing with students.

The lunch staff can be found at work from about 8 a.m. to 1:15 in the afternoon. Contentment is awarded through not only the means of those working alongside each member of the workforce, but also in the happiness it grants students.

This task is one involving cultivating relationships with students and by making sure that they maintain an approachable demeanor.

“I am the most easily approachable [person],” Couch said. “When people come in, they’ll [be] fighting, and they’ll ask for stuff, and I hear them, and I’m like ‘What do you want? Fries? I’ll get it for you.’”

Much appreciation and thanks are owed to the team of lunch staff working their hardest to provide meals that students eat each and every school day.

In an attempt to provide food, the lunch staff finds themselves gaining much more than just work from the task they provide on a day to day basis.

“Students [are my favorite part of my job],” Couch said. “I come here sad, grumpy, irritated, and the students make me laugh all the time.”