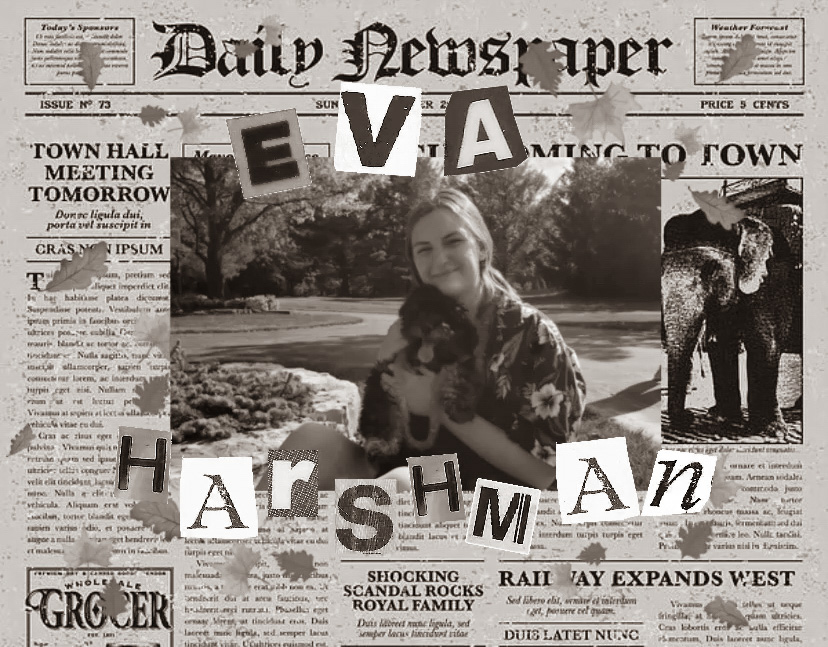 TCT’s The Countless Thanks 2021: Eva Harshman

Penny O’Meara, for being the one I can always count on to read my mind

I know I’ve let you down a few times, but you’ve never left me hanging. I feel like I can tell you anything—your ability to listen and be personal with others is so contagious. Though on the outside, we are almost polar opposites, I think that our souls split off of the same piece. We can finish each other’s sentences, get the same impressions about a person, and we even had the same refrigerator for a long time. As terrible as this sounds, I’m glad I had two years away from pretty much all of my friends because if I hadn’t, I don’t know if we’d ever have grown this close. If fifth grade hadn’t left us lonely going in and best friends going out, there would still be that awkward tension of me being the jerk who broke your wrist and you being the petty friend stealer. Those days are so far long gone, though, that we have new, positive memories to replace them. I have made so many great memories with you, and truly, you are one of the people who take up a huge chunk of my heart.

Pranit Koppolu, for being the kid I’ve never met, but somehow somebody I feel very close to

From the day you first messaged me on Discord, I knew that you were different than anyone else I’ve ever known. There is no way to describe your undying friendliness and kindness—not going to lie, you freaked me out for a while until I realized your personality was really that sweet. Not only are you so, so caring, you also have a mischievous side that has literally made me laugh out loud more than once. I never get bored on calls with you, and the Mickey Mouse voice gets me every time. I’ve known you for only a few months, yet I feel like we can talk about just about anything without it getting weird or uncomfortable. Never before have I met someone who is as loyal and sincere as you.

Emma VanTongeren, for having the same twisted sense of humor that I do

We were both absolutely wild as third and fourth graders, and I’m sure my mom was relieved that I found someone like you to match my energy. I don’t know how or why we started playing that interesting story with my American Girl dolls, but those are some of my funniest memories that will stick with me probably forever. On top of being my favorite playmate, you also reintroduced me to an activity that has changed my life. Before I rode horses at Meadowview, I was kind of unhappy with my riding so far. However, after a few years of riding with you, I’ve become so eager to learn and actually look forward to Mondays. We can bring out our inner horse girl around each other and forget everything else when we talk.

Saniya Mishra, for being someone who pushes me every day

I can’t slack off when I’m around you. Every time I start to slip, you grab me and drag me up. I am never allowed to be anything but the best version of myself around you, and I am all the better for it. While we have our serious talks here and there, “your mom” jokes dominate our conversations—you really are one of the most unsuspectingly hilarious friends I have. Despite that in 5th grade, we had an unspoken grudge against one another, we quickly forgot about that and became what I can most certainly call best friends. There were times when we would just sit and talk for lengthy periods of time, never once getting bored. We both have somewhat of a barrier around ourselves built, but I think over the years that barrier has started to crumble, and we are finally at the point where we are open and honest with each other.

Ellory Zietz, for coming back and being so understanding

Though we grew apart for several years, I am inexplicably happy that we have reconnected. You are someone who gets me and always knows exactly how to respond to everything I say. I feel like I’m trying to catch up with you a lot of the time, but no matter how far ahead you are, I can always hear you calling back words of encouragement. Not only do you always lend a helping hand for everything, but you are also so much fun to talk to. You always dig up something about one of our favorite fandoms that makes me crack up. You have the best ways of phrasing things that take an average sentence to a comedic one-liner. I feel like there’s been so much change in our relationship that I’m jumping from subject to subject, but I am so glad that we’ve been able to see each other in more than one way.

Jiya Patel, for being the best wifey ever

I am still at a loss as to why we haven’t hung out together much at all. You are one of the easiest people to get along with that I have ever met—you’re incredibly unproblematic. I don’t think in my entire time I have known you that I have ever had a negative feeling towards you. You are freaking hilarious in a way that is my favorite kind of humor. Sitting next to you in Physics is one of my favorite parts of the day, and while the class itself isn’t my favorite, you take it from average to exciting. You’re also always willing to listen to my barrage of uninteresting stories; you don’t brush me off, which means the world to me. I can’t wait to hang out with you more.

My chaotic besties, Texas Boy and City Girl, for just being yourselves

Texas Boy, you are one of the funniest people I have ever met. You might be younger than me, but we can joke together all the same. When you’re paired with City Girl, your comedy grows exponentially. City Girl, you are so real. Sometimes when I’m talking to people online, they don’t feel like real people, but you feel like a close friend of mine. We agree on pretty much everything, and sometimes I feel that we are eerily similar. You’ve got the best personality ever—you make great jokes, you’re caring, you have interesting stories to tell, and you are so relatable. Oh, and when you two wrote those Y/N fan fictions about me, I was seriously about to lose it. Those were some of the most blessed things that my eyes have ever met.

Addy and Kiera, for being the drop and roll to my stop

You two are so supportive of me and truly my biggest fans. I think at times, I might have gone mad while pounding out a feature while half-asleep if it wasn’t for your words of encouragement. Your “YESSS QUEEN” texts are forever my favorite notifications, and I can always count on you to edit my stories. I’ve known both of you since our days at Ada Elementary, but TCT has secured our bond more than ever before. I don’t think I ever expected that us three would all be in the same group, but we are such a power trio. I actually had such a difficult time writing this since I don’t think any words on a page could ever express how good to me you guys are. Stop, drop, and roll will always be the kids on fire! And yes, I’m taking credit for that name.

Everyone at Meadowview, for being so funny and pushing me to better myself

I remember when I finally had a good lesson on a horse I was previously struggling to control, and even if it wasn’t what you typically would call a great ride, it was a huge step for me; you guys could tell right away. You immediately complimented me on how I did an excellent job of riding him, and I was so happy that I had people to support me as I progressed. Ms. Dana, specifically, has taught me so much—I have fun as well as learn so much during my lessons. You have empathy for me when I have an issue, but also encourage me to overcome obstacles and push me to do so. I might have never passed certain barriers if I hadn’t met such great people.

Hannah Levering, for being the best Project Charlie ambassador in the world

I was both bubbling over with excitement and nervousness when I heard I was selected to teach Project Charlie, but the nervousness converted to even more excitement when I discovered that we were going to be teaching together. Even though we both have minor freak-outs before lessons, your confidence boosts mine, and I wouldn’t want to have anyone else as my partner in handling a class of fifth-graders. We’ve hung out for a while in school when we’ve had classes together, but I think recently, we’ve had more opportunities to bond than ever before. I’m so glad we’ve gotten closer.

Sydney Fentzke, for being Squid

Where do I even start? I suppose preschool would be the appropriate place since that’s when our hatred for each other began. Our arguments over who got to play with Livy that day eventually cut short when we parted ways, but when we were reunited in second grade, all hard feelings had disappeared. Although we’ve undoubtedly had our ups and downs, your friendship has been something that sparks fun and excitement into anything and everything. Driver’s Ed with you went from boring to hilarious, from getting yelled at for drawing on the whiteboard to that unlikely friend group we formed. Your outgoing personality fills in the void in my own, so we are like two peas in a pod. Sometimes I think you’re more like a sibling to me than a friend since we are engaged in constant banter, but I wouldn’t have it any other way.

Lillian Krug, for being my Pony Pal

I remember the day I picked up the book in Mrs. Ostrowski’s class that had a girl and a white horse on the cover. Little did I know that this dream-like book series would be an important pillar of our elementary school friendship. We used to be afraid that the fourth graders would make fun of us for pretending a lump of snow was a horse, but soon enough, we were the fourth graders ourselves, and now six years later, here we are as sophomores, and still friends. You’re incredibly friendly, fun, and endlessly loyal, and someone I am so glad to call my friend.

To anyone who I don’t know who talks to me, for doing something that you really don’t need to

To everyone who I am not super familiar with who takes time out of their day to talk to me: I love you so much. It means a lot when you hop up to my desk to ask me how my day is going or give me a quick compliment. Though I seem kind of awkward and unsure when this happens, or maybe even standoffish, I am usually so surprised and ecstatic that I don’t know how to react.