Tick, Tick…BOOM had me experience a world of emotions 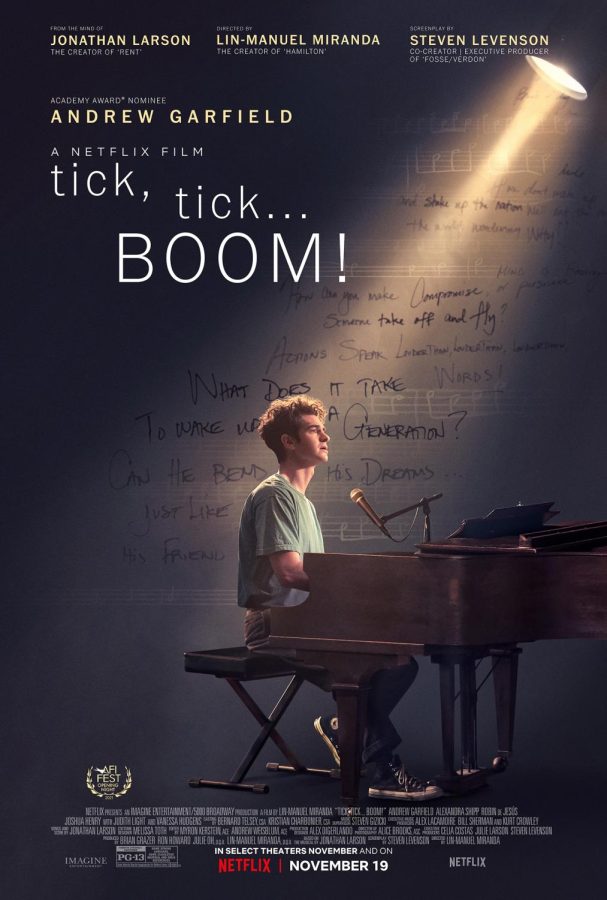 The cover of tick, tick...BOOM!

I have some close family that enjoys watching musicals, but it’s not often that I sit down to watch one myself.

A new film was released on Nov. 12 of this year called Tick, Tick…BOOM! The new film is based on the autobiographical musical written by playwriter Johnathan Larson.

In terms of a musical perspective, each song was well planned out; through the tone, volume, and lyrics, all stages of writing a song were thought to be well executed. I never questioned the way the director of the film, Lin-Manuel Miranda, placed the songs in each scene.

The musical wraps around the life of the main character, Jonathan Larson (Andrew Garfield), facing challenges as his world full of music and friendships are moving faster than his career. The whole outline of the film was a back and forth motion, crossing between Jonathan narrating the story and living in the telling moment.

Throughout the film, I couldn’t help but hum along to the music production even though I didn’t know the correct notes.

I was hooked for the whole two hours; not a minute flew by where I felt the need to keep my eyes pried open.

As I watched the first hour in school, I was listening to every word so intently and it didn’t matter if I was hunched over in an uncomfortable chair. The second hour, I was curled up in my blanket with my PJ’s on at home—it was one of those musicals that have the watcher dying to hear the rest of the story or wanting more outbursts of songs with every emotion you can imagine.

Some of my favorite scenes were so deep and had me empathizing with the characters. In one scene, in particular, Jonathan is given a great opportunity to exercise his creative mind, but when his close friend, Micheal (Robin de Jesús), realizes Jonathan made a comment to some of his co-workers, he gets aggravated. This leads to a heartbreaking conversation between the two.

While watching it, my eyes filled with tears. Certainly, not every scene was as emotional, but I was able to jump into Jonathan’s shoes. I could understand, to some extent, what he was feeling; his world was spinning around him like a circus, but all he could do was focus on the new music he was writing. I knew exactly how he felt.

My big takeaway, overall, is to always set your goals high; leap for the standards you make for yourself. Even if something doesn’t work out on the first try, get up, and try again. We all have dreams and hopes, but you have to take the first jump.

Life is your story, and you can leave your mark on the world whether it’s writing famous musicals, such as Tick, Tick…BOOM! and Rent, like Jonathan Larson, or for always having faith in yourself and reaching your goals—it doesn’t matter what you do as long as you’re doing it for yourself.

I hope that if anyone watches this Netflix film, they take away the message that left a positive impact on me and allowed me to see, once again, a new perspective of Broadway looking in from the outside.