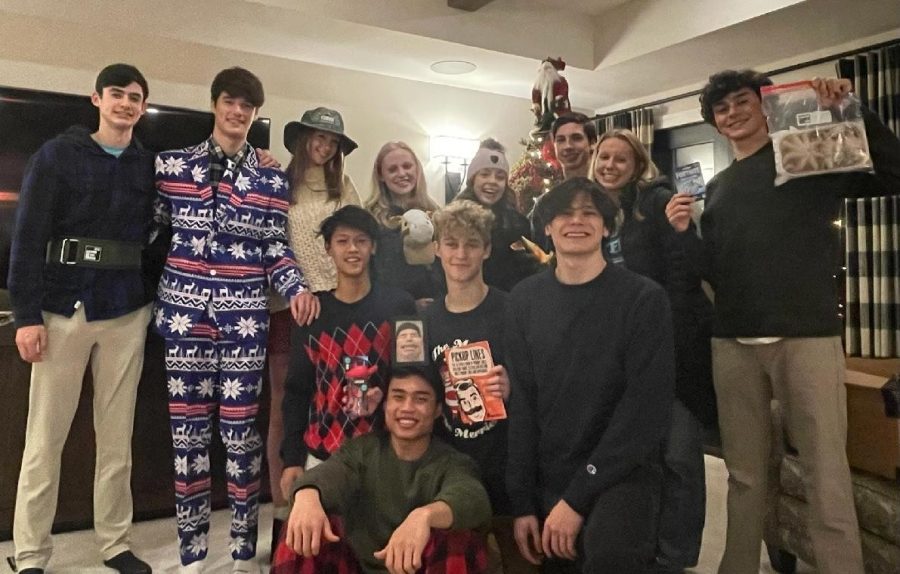 As holiday break draws near, there is one day in which all the members of FHC’s drumline are met with stares of confusion and raised eyebrows as they walk into class. The percussionists are forced to wear an ugly sweater to all hours of the school day—proudly yet uncomfortably displaying their received gift from their secret Santa sweater swap.

However, these aren’t ordinary ugly sweaters. Each one is handcrafted to comedic perfection, consisting of anything from cardigans with cats to a duct-taped football jersey. Senior Russell Baird, captain of the drumline, has experienced all the joys and discomforts of the exchange.

“When I was a freshman, those seniors were ruthless,” Russell said. “I got some Central player’s jersey duct-taped around the middle so that it was like a tunic, completely form-fitting, and I basically had two or three C-3PO joints that I could bend at and little foam balls hooked all over with tinsel. There was duct tape everywhere; it was hot, it was itchy, and I couldn’t move. It was awful.”

While it may not seem appealing to wear a “sweater” that is so tight it literally has to be peeled off, the laughter that comes with watching their fellow band members suffer through the tradition is what makes the experience worthwhile.

Even band director Laura Zilhaver and student-teacher Dominic Reaume are involved in the exchange this year; based on past experiences, their sweaters are sure to give a creative and hilarious touch to band class.

“[One year], somebody got Ms. Zilhaver one with jingle bells,” Russell said,  “so when she conducted, she went ‘ch ch ch ch’, and it also made her arms really heavy. She is a part of it this year; she drew a name and Mr. Reaume drew a name as well. We’re all excited to see who gets Mr. Reaume because his name is in there too.”

Without a doubt, the tintinnabulation and elation of the drumline’s sweaters are a thrill to be a part of and witness. Inspired by the excitement they bring, a variety of other groups around the school have taken up the gift-giving tradition. Whether it’s a sports team or friend group, it seems that no one wants to miss out on the anticipation and elusion of secretly buying someone funny and heartfelt gifts.

This year, the FHPS gymnastics team has incorporated the giving spirit into their practices. They will embark on three different exchanges, coming together with students not just from their own school, but also their teammates from FHN and FHE. Sophomore and gymnast Kennedy Zint is looking forward to not only revealing the present that she got but also being surprised with a gift that her own secret Santa chose to represent her persona.

“I’m excited to get my gift and see how the person who got me would portray me,” Kennedy said. “I want to know what they think of me by what they get. I’d probably be a Squishmallow. If you get to know me, I am kind, soft, and loveable.”

No matter the present, it’s always heartwarming to know that a friend took the time to specifically retrieve it for the joy of someone else. A multitude of gifts can be used to describe someone, and it’s always exciting to see what’s picked out.

These occasions provide students with an opportunity to think outside the box and also grow closer with each other. Even if friends are already close, adding in a fun holiday activity is almost guaranteed to strengthen their bonds.

“There will be a better connection with the team as we get to know everybody better because you actually have to talk to people,” Kennedy said. “Right now, we are close, but we’re not as close as we used to be because of all the new people that are coming in, so we [will] become that family again.”

Above all, the best aspect is how these festivities bring the community together.

Students don’t have to be in a certain sport or club to take part. Multiple different friend groups of FHC are getting in on the tradition and are anxiously waiting to see who their designated person will be.

Junior Lucy McLean seized this opportunity by bringing her friends together with a top-secret list and a $30 budget. When it comes to buying and receiving gifts, one of the most exciting aspects is merely the anticipation of discovering which friend each person is assigned and watching two people grow closer over a mystery.

“We have a pretty large group,” Lucy said, “and I like seeing when two different people who don’t know each other as well get one another. Then they end up becoming closer and getting each other funny gifts, and I think that’s cute. I like watching people open them and grow closer to other people throughout.”

Whether it’s growing a new friendship or simply nurturing an old one, it’s clear that engaging in holiday festivities will help the community come together—bringing merriment to a year that has had a surplus of obstacles.

Previously, Lucy has experienced the comedy of Secret Santa with her ski team. Buying gifts forces students to think outside the box, but mostly, it provides them with the chance to have fun with whatever they’re buying.

“I usually get weird things,” Lucy said. “One year, I found on Amazon a hairy man’s fanny pack, and I gave that to someone on the ski team that I had never met before. I don’t know if he loved it, but I liked it.”

Even if a particular gift doesn’t serve much of a purpose, nearly anything can light up someone’s year. The hilarious aspect coupled with the joys of coming together brings the holiday cheer to life as students anticipate the approaching winter vacation time.

“It makes you feel more like it’s Christmas time,” Lucy said. “Or winter time if you don’t celebrate Christmas. I think it gets you in the holiday spirit, so I like that.”

Lucy’s effort to bring forward the gift-giving spirit was a huge success as friends surprised each other with fun clothing items, gift cards, and a variety of other tokens that seem to match each person perfectly.

Now, the drumline is heavily anticipating the zero hour after their concert in which they are all given the opportunity to be goofy, have fun, and create memories together. Making music is all the merrier after their shared experience.

“It’s jovial because we have breakfast too,” Russell said. “We’ll all come in with sweaters, gift bags, and all that. We’ll bring in donuts, orange juice, bananas, and usually someone brings a cobbler. My freshman year, someone brought in a bunch of pancakes. So we sit around and eat breakfast in our sweaters; it’s a nice time.”

As unique as the sweater swap may be, it adds a special buzz to the school day before the students leave for the holiday break. Whether someone wants to unite a sports team, club, or simply a group of friends, there are undeniable benefits that are gained with exchanges such as these.

“If you have any opportunity to get someone ugly sweater, you should,” Russell said. “Anytime that is an option for you, 100% you should. Put $10 in your pocket and walk down to the Goodwill. I guarantee you’ll find one at least.”

Finally, the reason that these events light up the halls of FHC is simply because of the effort, creativity, and thoughtfulness that goes into creating every gift. Students are seizing the opportunity to bring the holiday spirit to each other to create an end-of-the-year celebration that will always be remembered.

“In general, I find that comedic gifts usually are pretty heartfelt,” Russell said. “If somebody gets you something that actually is really funny, even if it is just a stupid joke, it’s something that you’re going to remember, and it’s going to be a nice memory in and of itself.”