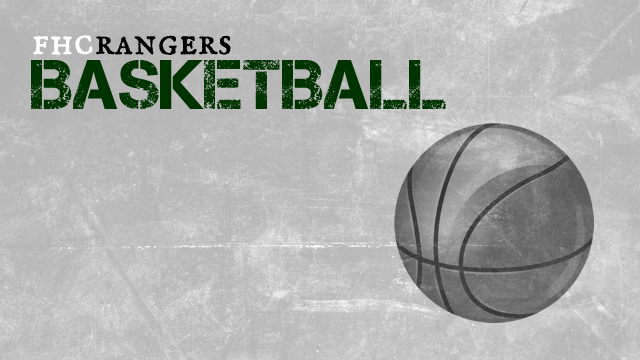 The Rangers boys varsity basketball team dropped its first game of the season to East Kentwood 63-54 on Friday night, despite five threes from junior Ty George, who had 11 points in the first quarter and finished with 19 points.

East Kentwood began to pull away in the second half, after the Falcons grabbed numerous offensive rebounds and played aggressive defense. Spanning over the end of the third and beginning of the fourth quarter, the Falcons went on a 12-2 run and pushed the score to 54-41.

The first quarter was FHC’s best as they went on a 13-0 run to close out the quarter. The run was ignited by three numerous three balls from Ty. He said he felt good in warm ups but thought he could have executed better in the second half.

“I feel like I had it going on in warm ups,” Ty said. “It translated to the first quarter. That’s the hardest I’ve ever gone in warm ups because I was really hyped up and ready to go.  But, I still feel like I could’ve capitalized more late in the game.”

The Rangers were outscored 18-7 in the second quarter and trailed at halftime 28-26. In the second half, East Kentwood utilized its size and athleticism. They dominated on the offensive glass and got a lot of second chance points because of it. Head coach Ken George said he was not surprised with anything East Kentwood did. He also mentioned that he did not prepare his team well enough to play against a very athletic Falcons team.

“We had watched them play, so we knew what they were going to do scheme wise,” George said. “I think that I didn’t prepare us well enough for the athleticism. That’s on me; I didn’t do a good enough job of getting us ready to play against that style.”

The third quarter ended with FHC trailing 48-41. East Kentwood was in the middle of their biggest scoring run of the game. The lead for the Falcons reached 16 half way through the fourth quarter, before FHC cut it to a single digit deficit in the closing minutes. George said that the team as a whole needs to improve defensively.

Other players that played well for FHC were senior Sal Sidebotham, junior Ryan Dunn, and sophomore Daniel Deindorfer. Sal had a few assists that kept FHC close throughout the game. One of Ryan’s key plays occurred when he gave a shot fake then blew by his defender for a layup. He also added a few steals and a blocked shot. Daniel was the most effective big-man throughout the night. He was effective offensively in the post, as he drew fouls and made a few baskets.

Even after the loss, expectations are still very high for this team. George says that his goal is the league championship.

“We’re on a league championship quest,” George said. “We think our league is going to be fun because it’s new. We also think it’s pretty equal across the board, with all the teams that are in it. There are some years when you can realistically talk about a league championship, and I think this is one of those years. We want to get better throughout the year, but our goal is a league championship.”

Sal agrees with his coach and might have even higher expectations.

“Our expectations are still extremely high,” Sal said. “We came in with a 20-0 mindset. Now our goal is to finish 19-1. We never expect to lose, and this is just a road bump.”