The winter festivities in FHC originate from all over the globe 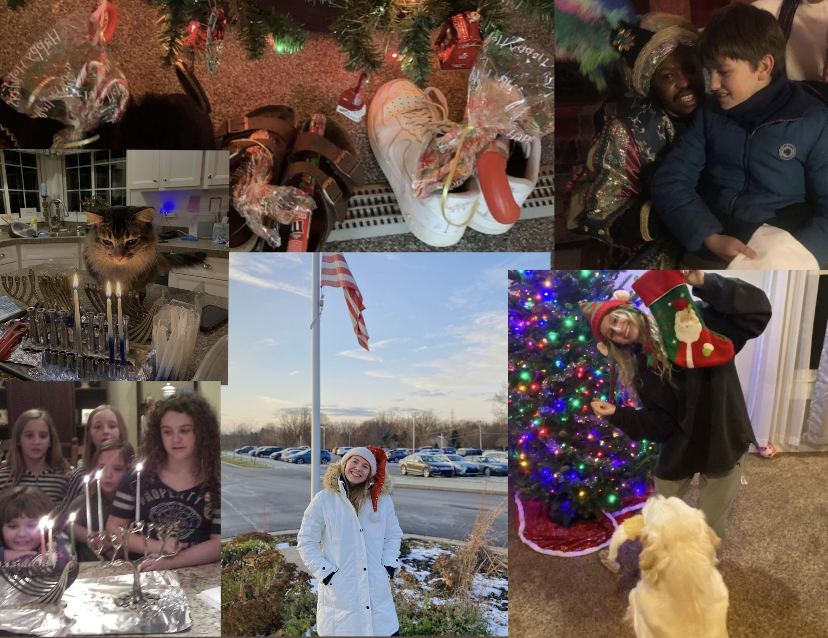 Festive photos of some of the holidays and traditions of FHC

During the holiday season, most find themselves surrounded by family, participating in exciting winter activities, or for senior Josie DeVries, being chased up an ancient oak tree by a small Pomeranian.

She’s always been afraid of dogs, so on Christmas Day, when her cousins, unfortunately, decided to showcase their new mutt, terror embedded itself in her figure.

“It was the dog’s debut,” Josie said. “We took it outside to play, and it started running after me, and it wouldn’t stop. I came outside, and it charged at me, so I decided to walk away, and it increased its pace. It continued to get faster and faster and faster, so I kept running away. It lasted ten minutes, and no one would help me; they were all just laughing at me. I had to get away [from the dog], so I literally climbed a tree.”

Although torturing her with their new dog, to Josie, family is more important than picking leaves out of her hair. Rarely does she ever get to visit with her extended family due to the physical distance between them, so when Christmas rolls around each year, her excitement to see her loved ones peaks, embodying her interpretations of Christmas and the holiday season as a time for family.

“Growing up, [Christmas has] been more of a family holiday as opposed to a materialistic holiday,” Josie said. “I have family from all around the world. I have some from England, Arizona, New York, and California. And it’s the only time I ever see them, so I’ve learned to appreciate more of the family aspect of the holidays.”

Due to rarely ever getting to connect with her extended family in person, when she’s around them, Josie makes enough memories to hold onto until the following holiday season. While traditions of highly competitive family laser tag, Christmas charades, owning two Christmas trees, and having Disney princess stockings at Josie’s home, junior Tori Bates celebrates a different holiday with contrasting traditions.

Being born and raised as Jewish, her holiday season extends to eight nights rather than a singular day through the celebration of Hanukkah. To Tori, Hanukkah is a time of year to bring her family together and celebrate.

“I celebrate by lighting the menorah and saying some prayers,” Tori said. “We play dreidel, and giving gifts I think is the most fun. When I was in elementary school, we ordered pizza because we were having a party, and we were making latkes, [potato pancakes]. And the pizza man smelled [the latkes] and was like ‘What is that?’ and we were like ‘Oh, it’s latkes, do you want some?’ and he was like ‘Yeah,’ and loved them. Every year after that, he [has] come over for Hanukkah and [has] gotten latkes.”

Traditions and family are of utmost importance during the holiday season, regardless of where in the world. For sophomore Lotta Petersen, being separated from her loved ones hasn’t stopped her from celebrating with them.

“We used to have small stockings on our chairs as a little advent calendar,” Lotta said. “Our elf, named Tomte Tummeltot, would put a small present in there every day. But, since my mom can’t put anything in my stocking because I’m here in America, she gave me a box with all the little gifts enclosed in it in August. And since we have been little, my dad has always gotten us milk chocolate advent calendars, and we always got them on the first of December. So this year, he sent one for me and each member of my host family.”

In addition to celebrating Christmas, Lotta also participates in a tradition popularized in European countries called “Nikolaus.” Nikolaus stems from a fable that Santa Claus’s neighbor, Nikolaus, visits each house through the night, snatching their Christmas lists from their shoes and leaving them goodies and presents in return. The list will then be returned to Santa to confirm he grants all the children’s holiday wishes.

A specific part of this tradition includes carefully polishing your shoes and scribbling out your finalized Christmas list with your family, which is Lotta’s favorite part of “Nikolaus.”

“Getting the presents from Nikolaus isn’t the real reason I love the holiday,” Lotta said. “It’s really that you are cleaning your shoes with your family, which is usually just something you don’t do, which has always made it fun. Also, the evening before, we all just sit together and make our wishlists and decorate them. It’s a cute thing we do that gets us more excited about Christmas coming up.”

These small holidays lead to the excitement of the winter season. Sophomore Nico Gandarias Sáez—who was born and raised in Spain—celebrates a similar festival for contrasting reasons.

“We celebrate the Three Mighty Kings,” Nico said. “It’s between the night of the fifth and the sixth of January.”

Three Kings Day broadcasts the story of the three wise men bringing Jesus Christ gifts of gold, frankincense, and myrrh. This chronicle of the Three Wise Men translates to a tradition mostly celebrated in Europe, Spain, and Latin-American countries, that since the three kings brought baby Jesus gifts, they would do the same for any other kid.

Composing the tradition of Three Kings Day, children leave their shoes out to receive presents from the three kings, and they participate in festivals and eating delicious, traditional food.

“The night before, we leave our shoes under our tree for the mighty kings to leave us gifts,” Nico said. “The night of the sixth, we go to my Grandma’s house and eat traditional Three Kings food, Rosca de Reyes. One of the years, I was in the big parade in Madrid, and I rode my bike in it, and it was really cool. And we go to a party on the fifth, and after that, we leave out a bucket of water for the king’s camels because that’s how they travel.”

So, no matter if you are patiently waiting for the three kings to come to deliver you gifts, cleaning your dusty, old shoes with family, making latkes for the pizza man, or being chased up a tree by a small animal, the holidays hold numerous important meanings and traditions to everyone across the globe. Regardless of what you celebrate or the traditions your family participates in, the walls of FHC are beaming with holiday cheer.

In the wise words of Lotta Peterson, “Happy Holidays and a Happy New Year.”