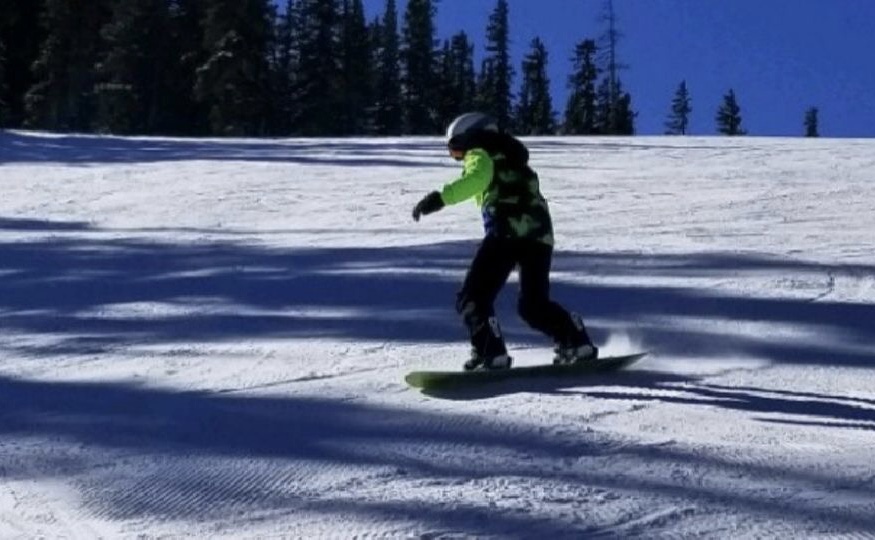 Spinning in deranged figure eights, sliding down a slippery slope, five-year-old Tyler Nass is attempting to snowboard for the very first time. Now, a sophomore, Tyler has improved greatly. From starting as not being able to control his board to now constantly visiting Cannonsburg, he feels much more comfortable with his skill set.

“Whenever I would try to go straight, I would end up going down in circles,” Tyler reflected. “People would watch as a five-year- old kid was spinning down the hill. But, I believe I’ve improved a lot since then. The slopes I couldn’t do [when I was younger], I can do now that I’m sixteen and so much better.”

For the past eleven years, Tyler has stuck to snowboarding as one of his key passions along with a few others that have to do with his natural born balance. Despite how long it might have taken Tyler to be able to snowboard without falling over, he never gave up, and that got him to where he is today simply because of the little things.

“Back then, my favorite thing about snowboarding would be just being able to go down hills and having fun,” Tyler said. “But now, it’s more about perfecting jumps, hanging out with my friends, and even getting to take in the views.”

Tyler’s family has taken him out of state to practice two times now. Together, they’ve been to the snow-covered state of Colorado—known for its skiing and snowboarding locations. While out-west, one of Tyler’s favorite parts would be seeing the views he’s recently learned to admire.

Both of Tyler’s parents have been skiing for sometime, especially his mom. They’ve always been supportive of him and pushed him to chase his passions and improve in anyway that he can. While some people might view snowboarding as just a sport, to Tyler, it’s so much more than that. Tyler is the first in his family to pick up a snowboard, but his persistence, work ethic, and passion would make you think he comes from a long line of avid boarders.

“My parents definitely encourage me [to continue to snowboard],” Tyler said. “When I couldn’t drive, my dad would drive me to Cannonsburg whenever I wanted. But, he also would pay for my lessons given by professionals; he really helped me a lot.”

While it can be mentally and physically draining to fall down time and time again, Tyler always gets back up. At the end of the day, it isn’t so much about his failures, it’s about his success and how much he enjoys it.

“Snowboarding has always been fun,” Tyler said. “I don’t think I would ever pursue a career, but I always want to go out to the hills every day; I want to be able to go with my friends and have fun. I think two years ago, when I got my newest board, that’s when I really developed my passion for this sport.”

One of Tyler’s favorite brands of snowboards is a Michigan brand that specifically makes their boards for the winter conditions, such as icy slopes, in the Midwest. While Tyler follows some snowboarding brands on Instagram, the majority of the clips he watches is on TikTok.

“My TikTok feed is all snowboard videos,” Tyler said. “I also follow The Lodge, a brand that sells winter accessories. [When I got out to snowboard], I have to put on some thick socks, boots, get my snow pants ready, and I might have to wear a jacket depending on how cold it is. I also wear a mask or hat, but I always wear a helmet because safety first.”

While Tyler dresses for the weather, the chill in the air is usually unforgiving in Michigan. The average high temperatures in Michigan are in the twenties to high thirties, while the average low is around nine. But because his sport is only really available in this season, Tyler doesn’t mind the varying temperatures.

“I don’t care at all that it’s so cold when I snowboard,” Tyler said. “I actually really like the cold. I don’t really enjoy being super hot and sweaty, so at the end of the time, I’m fine with dressing up and being able to do what I love.”