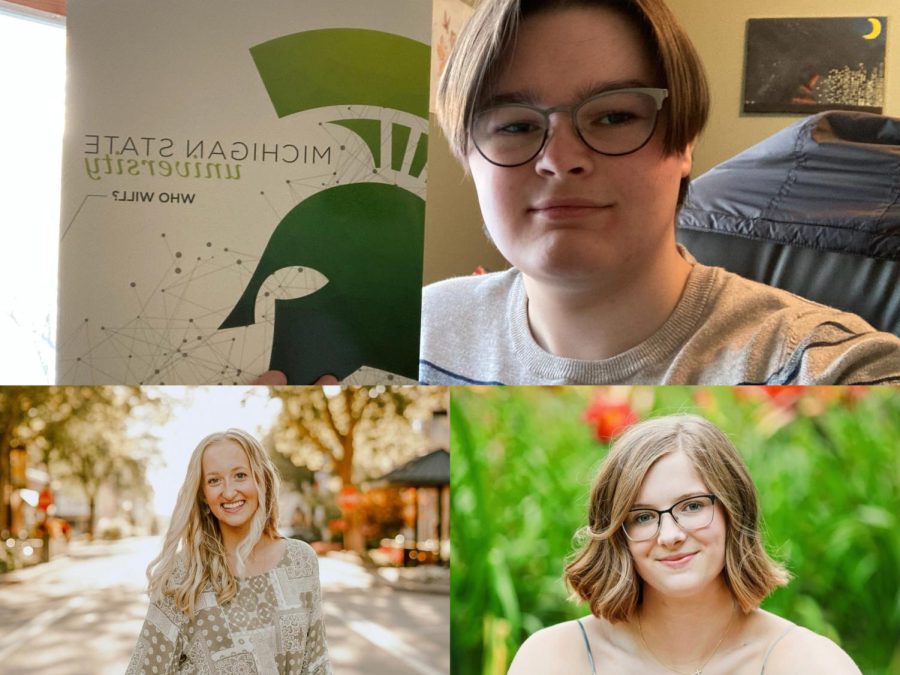 Andrew Swanstrom, Holly McLenithan, and Kate Sherman are all college bound next year

As the second semester creeps upon us, for many seniors, this can be a very exciting but also nerve-wracking experience.

For some students, second semester can mean waiting to hear back from colleges or simply spending time applying for scholarships to help cover the cost of tuition. But for junior Andrew Swanstrom, this only brings on the heat even more.

Andrew was lucky enough to have the opportunity to graduate high school a year early, and although his experience has been exciting, graduating high school in less than four years does not come without its challenges. Before junior year, Andrew took the ACT over the summer and plans to take the SAT this coming April.

“I don’t enjoy high school that much,” Andrew said. “I’ve gone through all the [prerequisite] courses that I’ve wanted to go through. For senior year, I would only be here for English.”

As much as Andrew will miss out on all the memories of attending high school for its full duration and being able to graduate with all of his friends, he looks forward to college and majoring in video game design.

“There aren’t a lot of [resources] here that can teach me that stuff,” Andrew said, “so I figured I would graduate early and go to college [instead].”

When Andrew found out he could graduate from high school early, it came as a huge surprise. Before freshman year, he did not plan on graduating early and only started to weigh his options when his parents brought the possibility to his attention.

“My parents brought it up to my attention that I could [graduate] a year early,” Andrew said. “When I found out, I said sure. I took an English course over the summer because I only needed half a credit.”

For almost every senior, the college application process can be stressful. For senior Kate Sherman, applying to college and subsequent scholarships has definitely not been easy.

Kate hopes to go to college for eight years and attend medical school. She wants to major in either veterinarian medicine or biology on the path to becoming a veterinarian.

When Kate was applying for colleges, she applied to two schools within the state for early decision and was accepted into both of them. When it comes to applying for scholarships, Kate found that the majority of it is focused on writing essays and learning more about yourself.

“It wasn’t difficult [applying] for scholarships,” Kate said. “There’s a lot of questions where you have to find some [information] online about yourself. Other than filling out a long [questionnaire], it is not that [hard].”

Kate started drafting her scholarship applications before Christmas break and her college applications the summer before senior year.

“I feel like [college] is the thing that gets drilled into you from a young age,” Kate said. “You’re finished with high school; you go to college. That’s definitely not the only path, but [it’s] the one I grew up thinking [about].”

As someone who thought she would never get through high school, senior Holly McLenithan was surprised to be able to look back on the last four years and see how far she has come. Holly has applied to six schools and has heard back from three; she hopes to attend college and specialize in elementary education.

Holly specifically hopes to attend a college outside the state of Michigan; growing up, Holly used to live in Alabama. She was born in Michigan, moved to Alabama when she was six, and then moved back to Michigan when she was twelve.

“I want to raise my family in the south,” Holly said. “Thinking about the career I want to go into, as an elementary teacher, I will be doing student teaching in my last two years of college, which means I’ll be making connections wherever my college is. If I’m going to school in a place where I want to end up living, it will be more convenient.”

Before applying to colleges and narrowing down which ones she wanted to apply to, Holly decided to do some more digging to figure out what her college experience would be like. During the spring break of her junior year, Holly went on a lot of college tours and even attended some online ones as well, which helped narrow down her options as to where she wanted to live the next chapter of her life.

“Over winter break during my junior year, I went on Naviance and went through all of my criteria,” Holly said, “and it gave me a list of colleges that I should consider. I did some more research and virtual tours and looked on some YouTube channels and was able to narrow down my list very quickly.”

Even though Holly is excited for this next step in her life, it makes her sad thinking about the fact that one day, she will no longer be a student at FHC. The people she once used to hang out with every week will very quickly become people she may never see again, but if there’s one thing that Holly’s learned throughout the last four years of high school, it’s that everything will work out in the end.