Sophomore Taylor Greeman hits the slopes but not on skis 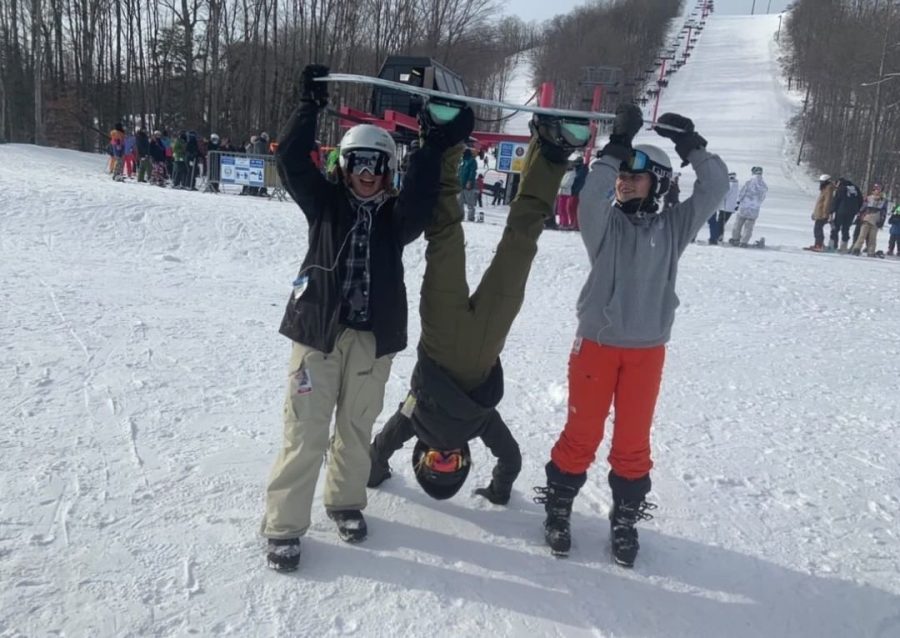 Taylor and her friends doing what they love.

Sophomore Taylor Greemann hits the slopes every year, and nothing else compares to the sheer thrill of dashing through the powder on her snowboard.

“Snowboarding has always been a big part of my life,” Taylor said. “My family skis and encourages me to keep doing it. I honestly love snowboarding, and it is the kind of sport that I never get tired of.”

A hardcore snowboarder like Taylor is not picky about where or when she wants to snowboard. To her, all that matters is that she can be out doing what she loves.

“No matter if it’s icy or raining, I still want to be out on the mountain,” Taylor said. “One of my best memories is when I was snowboarding with my friends on the terrain park trying new tricks, and my friend convinced me to try a ‘tame dog.’”

Many tricks in snowboarding have exciting names that a novice could not guess the trick just from the title, such as a ‘tame dog,’ the snowboard equivalent of a front flip.

“After psyching myself out for ten minutes, I went to the jump and threw my first front flip,” Taylor said. “I landed it by my fourth try, and it was crazy. It has made me a better rider.”

Taylor has been snowboarding since she was seven years old, so these tricks are not for newbies by any means. With years of experience under her belt, she is winning the physical game and the mental game. While she has less fear, it leaves more chance for injury.

“Luckily, I have not had any serious injuries,” Taylor said. “I broke my wrist a couple of years ago trying a 360 off of a rail. I don’t have much of a mental block for snowboarding anymore since falling just gives me a funny story to tell.”

While snowboarders just like to be out on fresh powder and don’t mind where they shred, they do have their favorite resorts in mind. Taylor has been to many resorts throughout her snowboarding career, but only one can be her favorite.

“My overall favorite resort would be Snowbird in Utah,” Taylor said. “I have only been there twice, and last year was my second time, and it was a great powder day. One of my favorite runs had to be the avalanche runs since you could be waist-deep [through the snow].”

Throughout FHC, Taylor is not the only one who uses her free time to glide down snowy mountains. Sophomores Alex Brown and Jacob Robertson have their favorite resorts, and just like every other snowboarder, they have stories to tell.

“My favorite resort is [in] Breckinridge, Colorado,” Alex said. “One time, I was giving my best attempt at a backflip and underthrew it; I ended up landing on my head, but I was okay. I just had a sore neck for three weeks.”

With the impending chance of injury, snowboarders need to choose their equipment wisely and ensure its protection. Had Alex not been wearing a name-brand helmet, his outcome could have been grimmer.

“My favorite brands to buy from are Burton and Arbor,” Jacob said. “While it may be more expensive, it will last for a good while.”

Newer snowboarders might be curious about prices for safety equipment and even the board itself. Taylor has seen what prices for all the equipment, skiing, and snowboarding, might come out.

“It depends on the equipment you buy, but it ranges from hundreds to thousands of dollars,” Taylor said. “Thankfully, I have parents who have purchased stuff over the years, such as season passes and a new snowboard. I used to also compete through [a team] called USASA, which can sponsor new gear.”

Sometimes, prices can drive new winter athletes away from the idea of engaging in a new hobby. Snowboarding is not cheap, but those who love it don’t mind spending the extra few coins.

“I wish snowboarding and skiing could be cheaper,” Taylor said, “so more people could have the opportunity to experience it.”

With Michigan’s recent winter storms, people will be hitting the slopes more often this year. It is expected to find all three of these athletes either at the top of a peak or flying down mountains.

“I honestly love trying new things,” Taylor said. “I think everyone in their life should have a chance to try [snowboarding], but you can’t be afraid of falling even when it is scary, so no matter how many times you fall, just get back up and try again.”