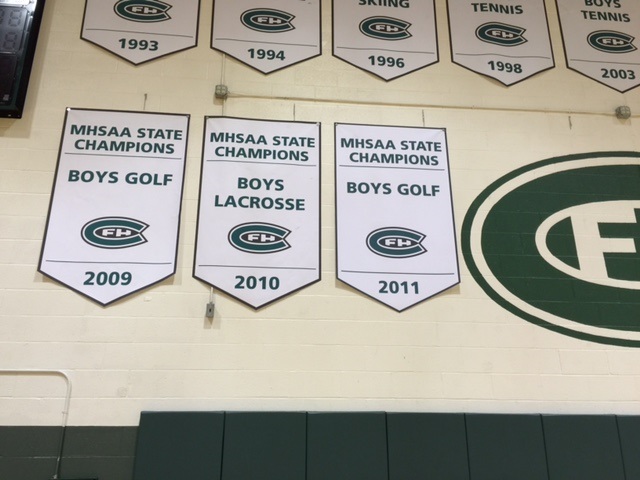 When Dan Pupel stands at the podium during his induction into the FHC Athletic Hall of Fame on Sept. 12, please excuse him for not being overly nervous.  It’s not his first induction ceremony.

Pupel is already a member of the Michigan Interscholastic Golf Coaches Hall of Fame and the Aquinas Athletic Hall of Fame.  But, he admits, this one is very special.

“I’m very pleased and honored about the whole thing,” said Pupel, who coached the boys and girls golf teams at FHC for a combined 55 seasons and retired from coaching in the mid 1990s.

Pupel’s joins six other individuals and one team as the first members of the newly-created FHC Athletic Hall of Fame.  The inductees were part of a golf outing in the fall, will be introduced at the football game on Sept. 11 and then inducted during a dinner/ceremony on Sept. 12.

The legacy left by Pupel includes 4 state runner-up finishes, 14 regional championships and 25 league championships that included a 13-year streak for the boys from 1978-1990.

“We won it every year,” Pupel said when reminiscing about the streak.  “We had some outstanding players.  EGR was in our conference and the other coaches called it the ‘little six and the big two.’  But then the EGR coach finally said it’s really the ‘little seven and the big one.’”

“It was always a painful thing,” Pupel said.  “The finals were at MSU and there’d be a blizzard and snow all over and some team with a good mudder would come through and win.  It was painful.”

His teams came as close as possible to the big prize.

“There were a couple of tournaments when we were within a shot or two.  Back in those days, it was all one day.  Eighteen holes, winner take all. Now they play 36 holes, so the best team usually wins.”

When Pupel retired from coaching FHC’s teams, he handed the reins over to Paul Tenyck who has continued the tradition of winning, including a state championship in 2009.  It was a championship that made Pupel proud.

“I was very pleased to turn it over to an outstanding man like Paul,” Pupel said.  “I worked hard to build it up – you don’t want to turn it over to just anybody.  He had some super players and they came through for the championship.  I was glad for the team, for Paul, and for FHC.  He is a real class guy.”

Tenyck feels the same about his mentor.

“Coach Pupel was not only the consummate coach, but educator,” Tenyck said.  “His players learned something about golf and life from him every time they stepped on the course, whether it was in competition or practice. Coach Pupel set the standard by which every program at FHC is held accountable to.”

“It has been my honor to try to fill the gigantic shoes that Dan left behind,” he said.

When Pupel first took over at FHC, the team struggled.  But, the winning started in the late ‘70s and continued for many years.  One player among many that he credits with turning the program around is Craig Adams, and Pupel still golfs regularly with Adams in the Grand Rapids area.  He also travels to Florida to play with former player Brian Glasco who is now a golf pro in Florida.

Pupel’s connection with FHC continues and he regularly attends wrestling meets and basketball games.  His son Andrew is an assistant with the wrestling program and his grandchildren Alyssa and Andrew are FHC graduates.

Pupel taught in Forest Hills for 32 years and said that coaching and teaching definitely had their similarities.  In fact, Pupel received an award from the University of Chicago for teaching excellence.

One teaching moment of teaching on the golf course still stands out to Pupel.

“I had a very good player who was in a slump,” Pupel recalled.  “He just couldn’t work his way out of it.  So, the day before the conference meet, he called me and we went to the course.  We worked things out and the next day he shot 75 and we won the tournament.”