The new remake of Cheaper by the Dozen tried too hard 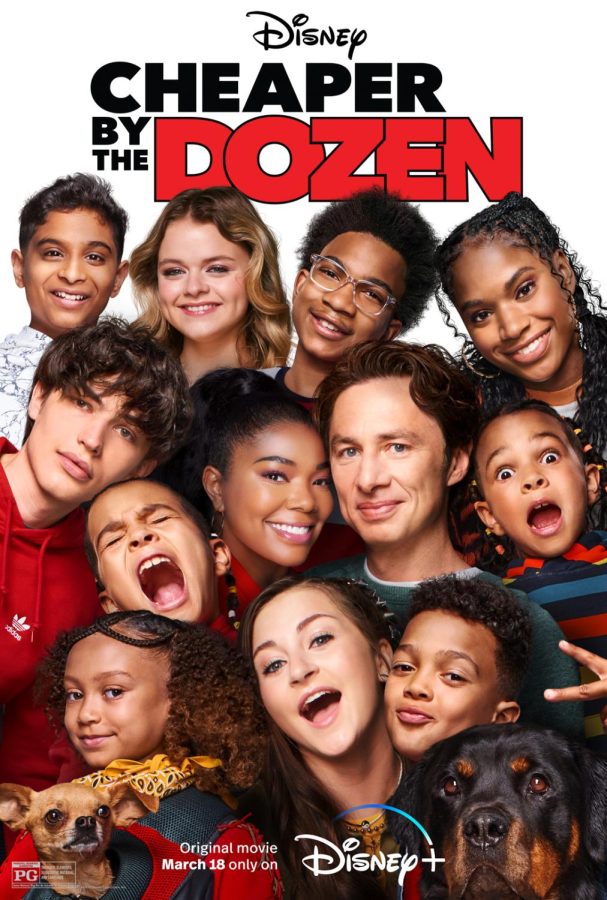 Whether it is a cartoon being made into live action or just a quality movie trying to make it in the modern age, remakes seem to be the trend of the movie business nowadays. From Lion King to Home Alone, Disney especially is fascinated with remaking hit movies.

The newest movie on Disney+, Cheaper by the Dozen, is actually a remake of a remake. The original movie was made back in 1950 following the true story of the Gilbreth family. In this version, viewers follow the 12-children family’s move to New Jersey and their adventures there. Though I have never seen it, I have quickly become interested in viewing the movie that started it all.

After the original came the one most people think of when it comes to the title Cheaper by the Dozen. Steve Martin’s 2003 version, where the 12-children family moves from a small town in Illinois to a suburb of Chicago, is full to the brim of laughs, jokes, and lessons. This version was so successful, they made a sequel following the family on a summer vacation.

Fast forward 19 years to today, Cheaper by the Dozen hit the screens again. Since the last version was so successful and still a beloved film today, I was surprised to see another version had been made, and even more surprised when I found out the one I loved was already a remake.

Cheaper by the Dozen (2022) follows the Baker family—a family a little different from the past versions. This time, the Bakers are a blended family. Zoey, the mom (Gabrielle Union), was originally married to Dom Clayton (Timon Kyle Durrett), and they had two of their own children before getting divorced. The same was true for Paul, the father (Zach Braff), who was married to Kate (Erika Christensen), and additionally, they took in their godchild on top of their two biological kids. After meeting in Paul’s restaurant one day, Zoey and Paul married each other and had two sets of twins themselves, adding the family up to 11 in all.

This was the first thing I noticed. There were only nine children, so even with the parents included in the count, that is not a dozen like the title suggests. Only after almost half of the movie does the twelfth member of the family join. Seth, Paul’s nephew (Luke Prael), joins the family after his mom was put in rehab.

With this family, Paul and Zoey own a restaurant that is picked up by investors because they want to sell their special sauce “that’s hot, sweet, or savory depending on what you put it on.” With this investment, the family moved out of their cramped house and into a bigger one in a gated community.

The new version of Cheaper by the Dozen is a letdown to me, though I didn’t have high hopes because the 2003 version was chuck full of laughter and fun. 2022 tried to match this with attempts at jokes and the silliness of Paul–like when he changes clothes before a meeting with investors only to be way underdressed when he enters. However, I didn’t find myself laughing, but cringing over what he was doing. They tried to match the level of comedy to the 2003 version but ultimately fell short.

Not only did many of the attempts at laughter fall short, but the film also tried too hard to make the movie more updated. Everyone is on TikTok, buying and wearing the newest trends in clothing, and constantly on their phones. Kate, the built-in babysitter, is so distracted in the beginning by TikTok that she doesn’t realize kids are yelling and riding bikes in the house.

As I watched, the plot seemed to be missing something. With a screen time of 1 hour and 47 minutes, it’s important that viewers don’t check out at any point, but even the first time I watched it, I experienced deja vu and found my mind wandering, despite there being a well-developed plot. At points, the story moves too quickly and others drags on too long.

There were some positives to this version, like more complex relationships between the siblings and the parents, and more conflict between Paul and Zoey that let people understand that family can have conflict. Plus, the diversity in the cast and the view on blended family life allowed for more representation in the movie.

Despite these positives, however, Cheaper by the Dozen 2022 fell short of its 2003 counterpart. Though it may be some people’s new favorite, I will stick with the older, less forced remake of the story of the Gilbreths.