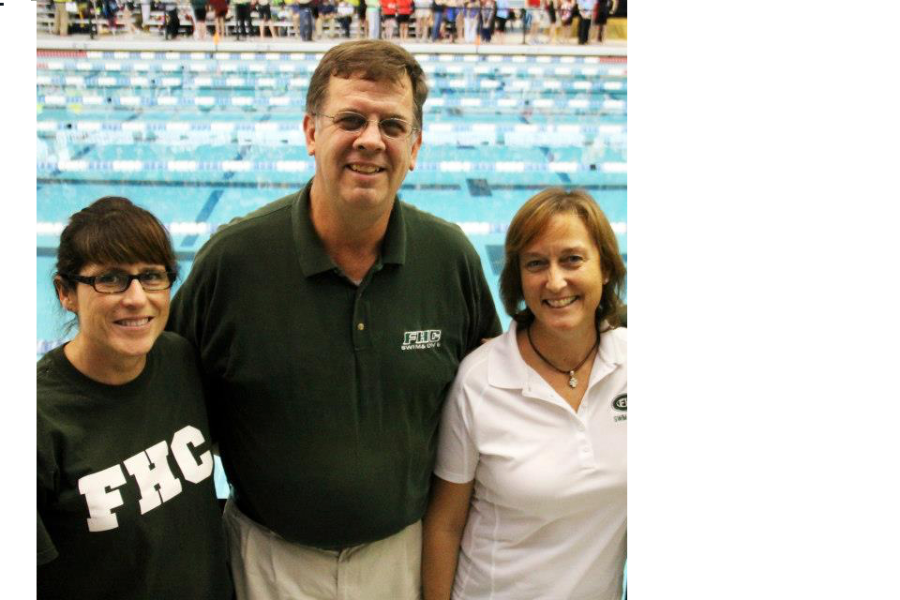 Tim Jasperse has been coaching for 33 years. Since beginning his career in 1982, Jasperse has unlocked the secret to what makes a successful girls swim, which has garnered him a spot in FHC’s new Athetic Hall of Fame.

“I am honored to be a part of the first inductee class,” Jasperse said. “I realize my placement in the Hall of Fame is because of the great athletes and teams I had over the years.”

This humility has followed Jasperse throughout his swimming career, which began when he joined his high school team during his sophomore year. He then went on to swim in college at Hope and, after doing so, decided not to leave the world of swimming.

“What drew me to coaching was the fun I had coaching during the summers at a local country club,” Jasperse said. “One thing led to the next and I took the job for FHC.”

Since then, Jasperse has taken the FHC girls to a new level of competition. Jasperse has consistently led the team to greatness, including a run he had from 1993 -1995 where the girls won two State Championships and a runner-up. This 1993 State championship was the first for any team at FHC. He also had a notable stint from 2005-2007 where his teams produced their second runner-up in addition to a third and fourth place finish at the State Meet. As 13-year assistant coach Clare Emaus sees, this is no easy task.

Jasperse will tell you this success comes from his athletes, and this is true. But six-year assistant coach Kate Diepholz sees how Jasperse extracts greatness from every swimmer to cycle through his team.

“[Jasperse] is an imposing physical man, standing at 6’5″, yet he has a gentleness about him that the girls can connect with,” Diepholz said. “He cares deeply for the team, but also the individual athletes as they unfold their potential under his coaching.”

Emaus agrees with Diepholz, citing Jasperse’s integrity and ability to make people laugh as two of his most admired assets as a coach.

“Tim sees the team as varsity athletes, not a girls varsity team,” Emaus said. “He holds the athletes accountable to their actions. Tim has a goal that each and everyone athlete will get faster each year, and after 4 years on the swim team, student athletes will walk away a better athlete and person because of the way Tim conducts himself.”

Jasperse conducts himself is as a class act. The composure he carries to each practice and meet is noted by many of his colleagues and athletes, along with his compassion and desire to include swimmers of all types and levels of skill.

“I try to make everybody on the team feel important on the team,” Jasperse said. “What makes me love swimming is a combination of working with young adults, strategizing to win meets, and help shape positively the lives of my athletes.”

One life he shaped so positively was that of Alex Hoiles. Hoiles, a four year swimmer under Jasperse and captain during her senior 2013 season, currently swims for the Naval Academy. She cites Jasperse as a dynamic role model in her life, and says that had it not been for him, her career would never have taken off the way it did.

“After my freshman year, I thought I would only be able to swim at a D3 school,” Hoiles said. “He continuously told me I had the ability to do more, and once I started believing it, he was there to push me the entire way. He was supportive of every move I made, in and out of the pool. I still think of him to this day whenever I practice, and still try to make him proud of me even if I know he may not be watching.”

As for his entering the Hall of Fame, both assistant coaches and Hoiles agree that it was a long time coming. For a coach with a history and attitude such as Jasperse, the induction is a culmination of everything that Jasperse is and everything that he and his girls have accomplished.

“Tim is one of the best coaches and mentors that I’ve had the privilege of working with,” Diepholz said. “He is a man of character, strength and passion. In sports these days, these traits are rarely found in one person like they are in Tim. This award is most certainly well deserved.”