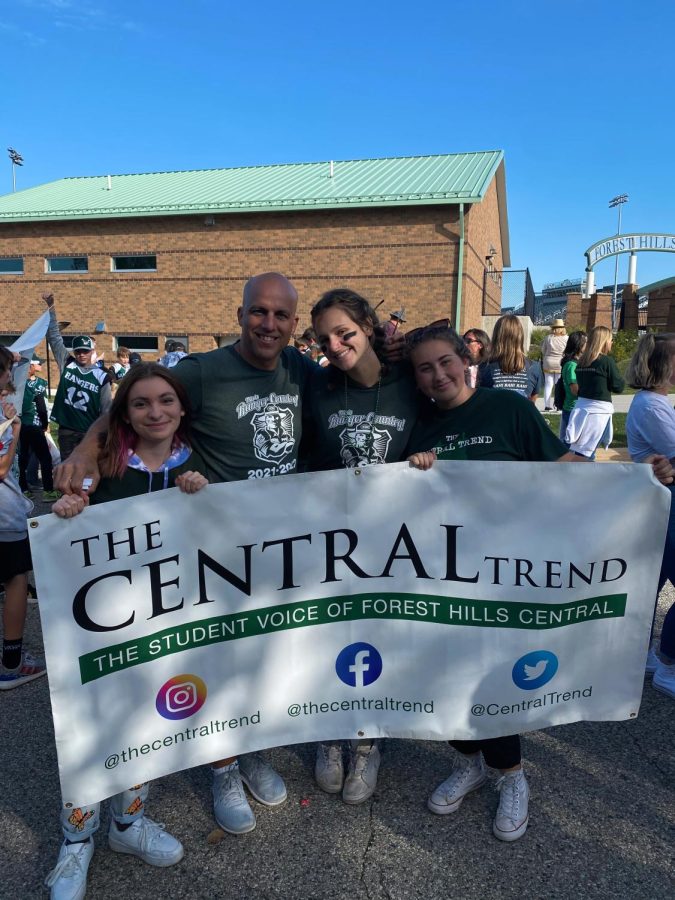 Nat, Mr. George, Kelsey, and I at the Homecoming parade months ago

On the rare day that you can hear the music playing under our laughs and conversations, it’s usually Taylor Swift or a playlist that’s called “54 and Bald.” It plays from a computer tucked in the very opposite corner of Room 140, making it more work than it’s worth sometimes to change the song from my spot, on the brown couch, in Room 139.

In front of the couch rests a coffee table littered with old rubrics and every Sharpie color imaginable; in front of that, at this very moment, you’ll find me, sprawled across the carpet with my headphones in as the Honors English class reads in the chairs around me and I run away from my fifth hour because I’ve been dreading this goodbye since I knew I’d get to write one.

I’m saying goodbye to that one time we walked in a parade and every morning that we spend editing. I’m saying goodbye to dressing up in Halloween costumes with one of my oldest friends for a football game and to D&W trips simply because I’m bored and could never say no to an iced tea.

I’m saying goodbye to family dinners and trips to Target where I spend more money than I should. I’m leaving my dogs behind, and I’ll miss them like crazy. I’m saying goodbye to late-night conversations with my siblings after my parents go to bed—late-night drives where we fight over who gets to DJ as we speed down Cascade with the windows down.

And while I’m saying goodbye to all of that and it feels like my heart is being clenched by some higher force in this world and the air is being pulled from my lungs, I’m also saying hello to a new favorite place to get a latte and a new comfort convenience store in the heart of Columbia.

I’m saying hello to what I can only hope will be the best summer of my life; I’ll finally turn 18. I’ll spend the warmest months of the year soaking up the sun and her wisdom as I enjoy the last bit of my friends before we all leave.

I’m saying hello to new friends in new places and turning into a person who loves to be outdoors. I’m saying hello to a school whose journalism school houses all the hopes and dreams I have for myself, a school that I get to visit again in June. If my timid sophomore self could see me now, she’d be in awe of what awaits me.

I’m saying hello to life after graduation, to life after FHC, and while that terrifies me, I’m ready to make something of myself.