The ugly truth about forest fires 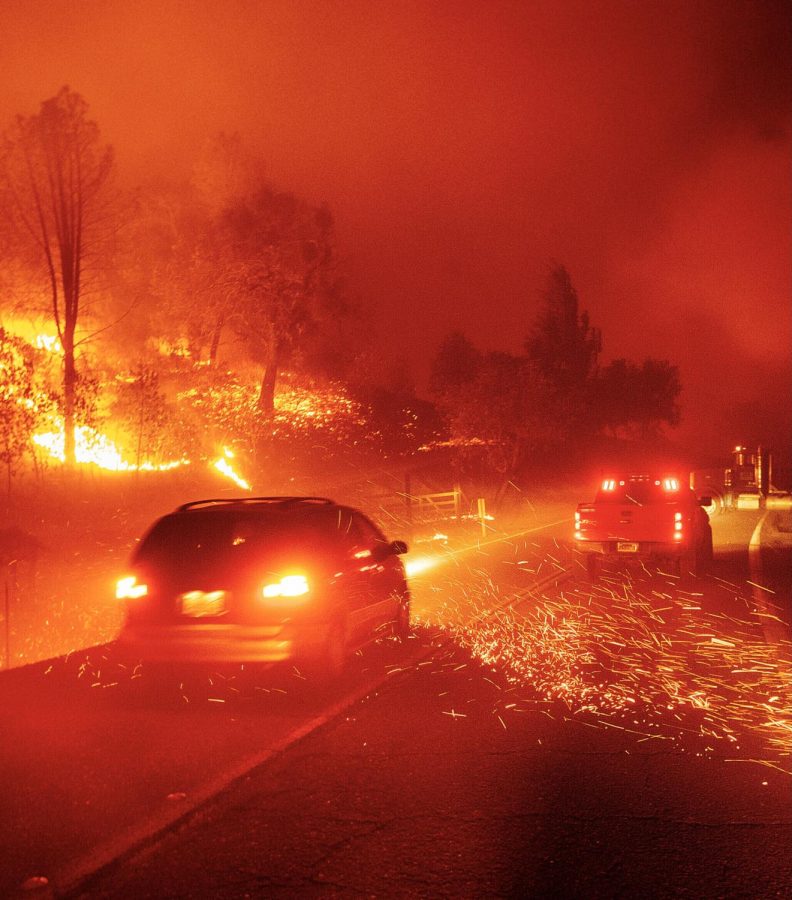 An image of the forest fires in California taking over the landscape.

On the West Coast of the US, states are being engulfed by the unforgivable, unremorseful flames of forest fires.

Specifically in California, homes are being destroyed, many people have been either killed or injured, and countless others have evacuated.

For far too long, forest fires have been categorized as “natural disasters.” However, 85% of forest fires are caused by humans. Unlike tsunamis, hurricanes, tornadoes, and earthquakes—which all have actual natural causes—forest fires are mostly unnatural.

The careless acts of humans and the arid summer climate cause irreversible damage. According to the National Park Service, humans cause most forest fires by leaving their campfires unattended, disposing of their cigarettes, the usage/malfunction of equipment, burning debris, and intentional acts of arson. One act leads to another, and like the domino effect, everything builds up to our habitat quickly deteriorating.

Ironically, the people causing the forest fires are harming other humans. The Center for Climate and Energy Solutions (C2CES) explains that the quality of life decreases as the smoke causes respiratory and eye illnesses, specifically in the elderly and children. The fires can also melt plastic water pipes and contaminate the water with carcinogens, which people then consume. Humans are essentially harming themselves with their unawareness of their reckless decisions.

While the aftermath of forest fires causes harm to the human population, what it does to the environment is far worse. C2CES further explains that forest fires generate a plethora of greenhouse gases such as carbon dioxide, black carbon, a bi-product of charcoal, and methane. While those gasses are harmful, the vegetation that regrows in the area where the fire occurred uses up the majority of the carbon dioxide released into the air, therefore neutralizing the climate. Unfortunately, with the number of forest fires climbing higher, greenhouse gases are not being fully removed from the atmosphere.

Thinking back to the cataclysmic bushfires that swept across South Wales, Australia, in 2020, around 480 million animals were estimated to have been killed. The North Complex wildfire in California—also in 2020—destroyed around 380,000 acres of land along with succeeding local species such as deer, bears, and coyotes. The International Fund for Animal Welfare (IFAW) illustrates that though animals can use their keen senses of smell and awareness to detect fires, the flames could be spreading too quickly for them to escape on time (up to 6 mph). IFAW mentions that it can take up to a year for a species to recover from a forest fire, due to a missed breeding season and the reestablishment of a secure habitat.

While the forest fires that are currently spreading across western states are caused by the annual drought season and high temperatures of the summer, they are a result of human-made climate change. These fires are simply going to lead to more respiratory illnesses in humans, more carbon emissions infesting the atmosphere, and the loss of biodiversity in habitats. It will continue to happen, year after year, unless we make a change in ending our harmful actions.

To begin, we simply need to be more self-aware of our actions and surroundings. Be sure to always have surveillance on campfires, along with making sure the fire is not too close to surrounding trees that could easily catch aflame. As stated before, irresponsible disposal of cigarettes can lead to devastation. An easy way to prevent this is by correctly disposing of cigarettes—or simply not smoking at all. Burning debris can quickly turn south, so either keeping it contained or finding an alternative can make all the difference. Be aware of the equipment being used in the wilderness; make sure that the machinery is properly working before using it, along with trying to purchase tools that are made of environmentally-friendly materials. No matter how small the change may be, it can make all the difference.

We cannot stand by and allow forest after forest to turn into nothing but ash. After all, we only have one planet and one chance to save it.