Emma Raisch forges her relationship with her sister through naming plants 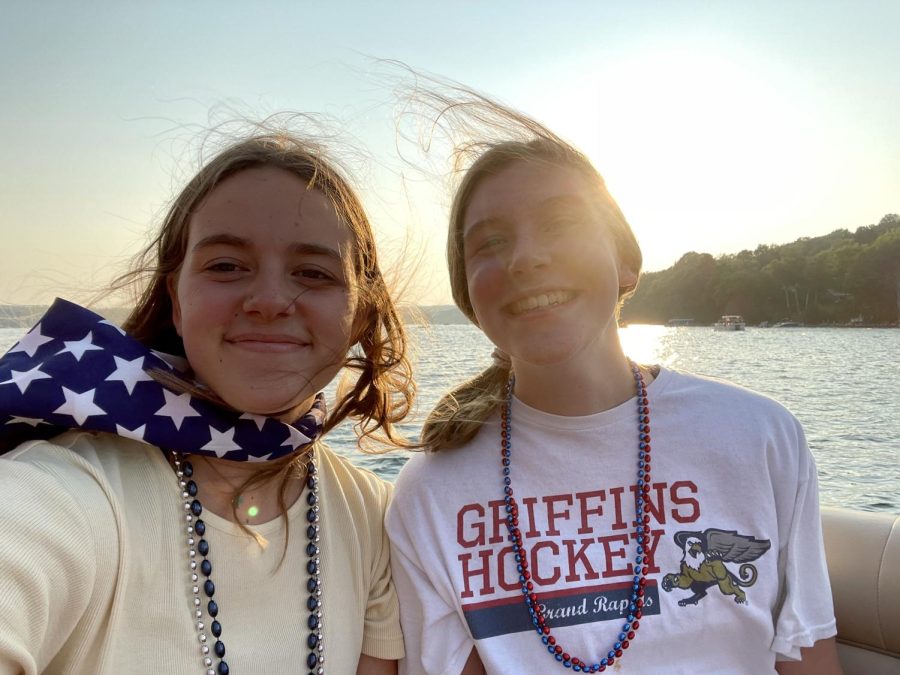 Senior Emma Raisch (right) and her sister Megan (left), who name plants together.

Senior Emma Raisch has a collection of 50 plants, all with names. One of these shares a name with a Minecraft Panda.

Emma and her sister, Megan, have been buying and naming plants for years. Some are graced with the names of book and movie characters, while others receive those associated with their past.

“I have one plant whose name is ‘The General,’” Emma said. “It’s after a YouTuber that my sister and I would watch who would play Minecraft. Basically, [Megan] had one, and the Youtuber was called ‘Mythical Sausage,’ so we named the plants that, and ‘The General’ because [the YouTuber] had a Minecraft panda named that. It’s kind of embarrassing.”

While these names would seem out of place to anyone that did not know the story, they make perfect sense to Emma and Megan. These two plants, along with many others, keep Emma and her older sister close, even when they are miles and years apart.

Naming plants is a key tradition in their relationship that they have partaken in for years. They may not have started the tradition together, but it quickly grew to be shared.

“Megan was the first one to buy plants and name them,” Emma said. “I remember going with her to Flowerland, and I realized there were little mini plants that were three bucks each. I bought four of those and named them after a book series that I was reading—The Mysterious Benedict Society. That’s probably the most distant memory I have of getting plants.”

Even from the start, Emma named her plants with a theme. Names from books, movies, and television shows adorn the plants she owns.

Her favorite plants get the pleasure of being named after her favorite things.

“[Megan and I] share a plant that has six or seven parts,” Emma said, “and they’re all succulents that we got at Home Depot. The reason why it’s my favorite is [that] we named each one after Little Women characters. That’s my favorite movie and probably book, in general. That film got me into cinematography and film. It has a lot of symbolism in my life.”

Emma and Megan obviously share plants, such as the multi-part succulent, but that’s not all that they have in common.

Despite their four-year age difference, Emma and her sister find a plethora of things to connect with. They have countless shared interests to discuss and do together.

“I’d say [getting plants together]  has helped [our relationship],” Emma said. “We have always had a lot of similar interests. She did volleyball, field hockey, and track. I followed her into that. I literally did the exact same things that she did, in regard to school. Plants are one of them, but we’re both also really into cinematography. You could say [getting plants] did help [us be closer], but we’ve always found things we both enjoy doing.”

Sports are a clear similarity between Emma and her sister, but they’re not a favorite thing to do together.

Getting plants has been especially important to the foundation of their relationship, but there’s always more to build on top of that. Emma’s favorite thing with her sister ties into their plants by being their namesakes in the past, present, and years to come.

“We both love movies,” Emma said. “I probably watch at least one movie on average a day. We both developed a love for film at the same time. We have different films that are our favorites, but she’s my go-to person to talk about film and cinematography, and [discussing] if it’s a good movie because people said it’s a good movie. I’ve always loved to do that with her, and it’s not what people would call a hobby, but it’s something that comes very naturally to us. We’re always like ‘Hey, have you seen any good movies recently?’ Whenever she comes home from college, it’s one of the things we need to catch each other up on.”