Minions: The Rise of Gru continues to surprise and entertain me 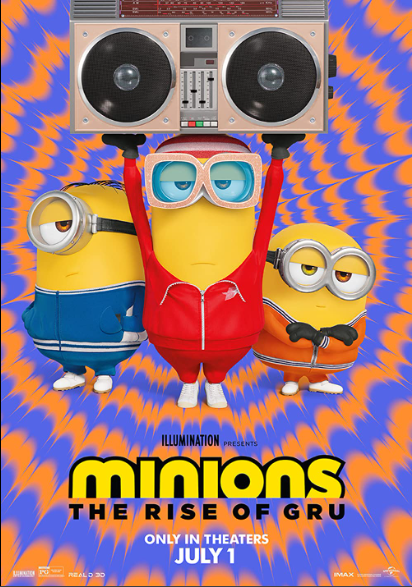 Minions: The Rise of Gru.

The first thing that comes to mind when I think of the word “childhood” is cartoons such as Mickey Mouse and Tom and Jerry—mainly because these were the characters that I grew up watching and are ultimately what helped shaped my childhood, but today those are not the kinds of people that I wish to talk about today. Today, I want to talk about the minions.

On July 1, 2022, theaters released Minions: The Rise of Gru, the sixth movie of the entire minions series. Normally, I would be open to watching movies that are in my age range, but as someone who dislikes horror movies, it would be an understatement to say that I enjoy films originally made for people younger than me.

Although Minions is not meant to be a serious movie, there is definitely a repeating theme that occurs throughout the film. There’s just something about mini-yellow characters running around the screen that elicits a feeling of happiness inside of me.

The film begins by introducing Gru—voiced by Steve Carell—as a child.  Gru’s dream has always been to be a villain like his idol, Wild Knuckles—voiced by Alan Arkin—who used to be the leader of a group called Vicious 6, the group that Gru applies for.

As the film unravels, the audience starts to see more of Gru’s backstory and how the minions have helped him to become a successful villain. From conducting missions with his minions around the city to pulling a heist of his own, this is what seems to make Gru the most content despite how dangerous it can be to get the job done.

Even though Gru has not always been successful in his missions, this doesn’t discourage him; instead, it motivates him to try harder. For example, after his audition with Vicious 6, Gru decides to take matters into his own hands and steal an ancient heirloom that supposedly has magic powers that can disperse over the city.

When Gru gets angry at his minions for a failed mission attempt, he leaves the house and disappears into thin air. While the minions are trying to correct their mistakes, Gru plans another heist with another partner in crime and decides to break into a bank in hopes of stealing a famous painting.

But throughout all the crimes that Gru commits in this movie, the one character trait I see most prevalent in Gru is perseverance. This is mainly because Gru will do whatever it takes to get a task completed even if it results in death or even getting caught. This, to me, is very important because I tend to be someone that likes to give up easily, but seeing Gru being able to pull off crime successfully reminds me to keep going no matter how tough it gets.

Although the minions can get silly and obnoxious at times, and Gru can get short-tempered easily, there is nothing that makes Gru happier than living life on the edge with his crew. The characters did a good job of emphasizing the emotions of characters which I think is really important because it only adds to the pathological appeal of the film.

Despite the comical aspect of how Minions: Rise of Gru was portrayed, if there is anything that this film has taught me, it’s that I should never give up on my dreams because you never know where they will take you.