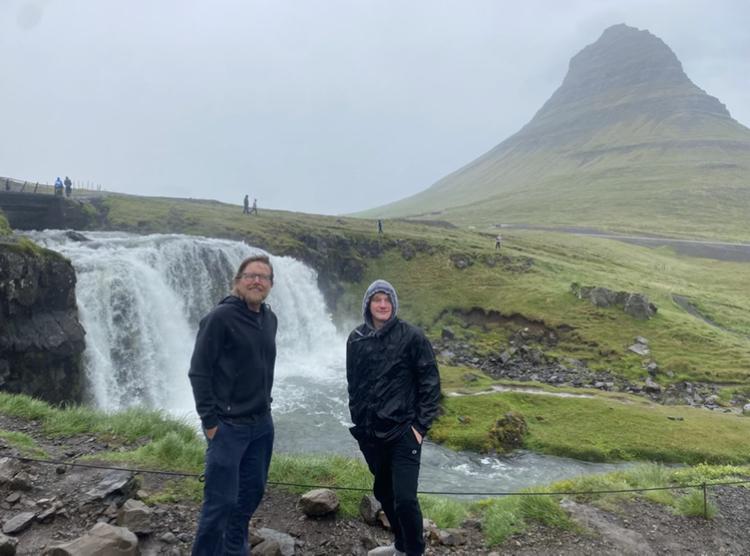 Nick and his father in front of a waterfall in Western Iceland.

As senior Nick Gootjes was taking in sites of caved-in walls and other ruins, he was informed that angry elephants had been the ones to smash the previously standing buildings to bits.

This astoundingly unique situation was presented to Nick during a family trip to India. With seeing and experiencing the world being a top priority for him and his family, this event was one for the record books, but naturally, it wasn’t the only interesting aspect of their trip.

“In India, we stayed in a large tent [or] gazebo sort-of thing in the middle of the jungle,” Nick said. “[One day], I took a few steps out [of the tent] and all of a sudden heard a scream. [When I] looked up, there was a monkey the size of me swinging above me. I completely froze.”

Although these run-ins with nature could be considered somewhat intimidating, Nick’s passion for traveling and adventure is fueled by incredible experiences like these. This love for seeing the world was an inherited trait from his father.

Due to his father’s shared interest in traveling, Nick has been to many remarkable places. India, of course, is one of the most notable, but Dubai, Costa Rica, and many more also make the list. Most recently, this summer, his family had the opportunity to visit the breathtaking country of Iceland.

“[At first], when we got there, it kind of looked like a wasteland because of how the rocks were spiking out of the ground,” Nick said, “[but] as soon as you get [further] from the airport, at all times, you’re able to see a waterfall, a mountain, or the ocean. [Then], I found this trail [that] wasn’t really used, and so I went up [the trail] and found a rock ledge that was overlooking a huge waterfall. It was really pretty and peaceful.”

Exploring is, by far, one of Nick’s favorite aspects of travel; he has a talent for discovering beautiful places off the beaten trail. This ability has allowed him to see and experience things most teenagers could only grasp through pictures.

In a country where the sun never truly sets, Nick had a lot of extra time to feed into his passion for adventure. Having one of the most beautiful countries in the world at his fingertips, Nick made sure to soak all of it in. Surrounded by rivers, sheep, and mountains, it was easy to find more life-changing sights.

“Another day [in Iceland], we went to the Black Sand Beaches,” Nick said. “I walked out and was squinting, trying to figure out where I was. The mountains surrounding [us] were obsidian black and so was the sand. Eleven-foot waves [were] constantly crashing on the shore. Then, we traveled to an island [where] we climbed up and saw puffins.”

This experience is one so unique to Nick and his family. He has always been in awe of nature, and experiences like this have been really formative in how he sees the world.

Nick’s trips are consistently filled with adventures like these, making traveling one of his favorite pastimes. His hope is to continue to fuel his passion for seeing the world, and as his future approaches, he’s begun to think of a plan to pursue this dream.

“After college, I want to do the ‘around the world plane ticket,’” Nick said. “Pretty much you buy it, and as long as you’re moving east or west in one direction, you can get however many flights you want. [I want to go to] Finland, Sweden, move laterally along Europe, go through Africa and Asia, and then back to [The United States], which would be awesome.”

Although he doesn’t know his exact future with traveling yet, as of now, plans are in the works for Nick to travel to Asia and make smaller trips across the United States. Although he has many other hobbies, interests, and plans for his future that he knows might take him in many different directions, seeing the world will always be one of his top priorities and favorite things to do.

While seeing beautiful places, experiencing amazing events, and exploring nature is all incredible aspects that come with travel, the life lessons Nick has learned throughout his experiences are truly priceless.

“I classify two types of travel: leisure and experience,” Nick said. “India was an experience, an opportunity to see how people live across the world from me. [It reminded] me of how unbelievably lucky I am. One thing I could not forget [about India] was how much [the people there] smiled. [In Iceland], I was relaxed and amazed the whole time. [Both] trips were amazing and beautiful in their own ways.”