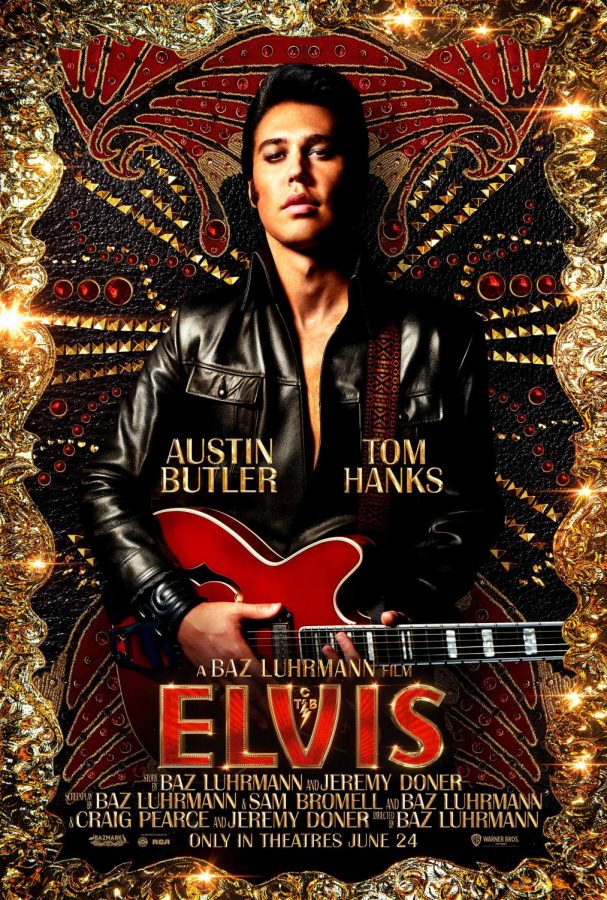 I was never one to avidly listen to Elvis Presley.

Of course, much like the rest of the world, I was fond of the King of Rock, but I was no superfan. I knew some of his more popular songs such as “Jailhouse Rock” and “Can’t Help Falling in Love”; however, I knew very little about his life and upbringing to everlasting fame.

A few months ago, that opportunity was handed to me on a silver platter with a teaser to view his life in motion pictures on the silver screen. Ever since the first time I saw the Elvis trailer, I knew that I must watch that movie.

Though the movie had been in theaters for around two months when I finally got around to watching it, excitement levels were high between alumna Jessie Warren and me, nonetheless. After impatiently waiting through the previews, we were startled by the intro of Presley’s “Suspicious Minds,” his voice echoing throughout the whole theater. Giddy, we settled in for the next three hours to watch what I can easily proclaim as one of the best movies I have ever seen on the big screen.

Elvis follows the life of rockstar Elvis Presley (Austin Butler), his story is told by his manager, Colonel Tom Parker (Tom Hanks). The first time that we see Presley is when he is a kid as he’s discovering his love for music. This scene is one of my favorites in the whole film. It was organized chaos mixed with euphoria—it had me captivated. I honestly do not think I blinked the entire duration of the scene since my eyes felt weirdly dry right after. I could feel my smile creeping on my face. Not even ten minutes into Elvis, I was obsessed.

During the entire movie, Butler and Hanks do an impeccable job of depicting the infatuating life of Presley. The director, Baz Luhrmann, included almost everything that Presley went through while rising to fame, such as his relationship with his mother, Gladys Presley (Helen Thompson), and his time in the military.

One of Presley’s largest scandals during his early years was the way he danced, which was one of the focus points in the film. His moves were seen as “too provocative” and led to him losing multiple performance gigs. However, Presley did not listen to the complaints and continued to perform the way he liked, which is what brought him fame in the first place.

With his dance moves being one of Presley’s most beloved aspects of him, it was pertinent for Butler to be able to replicate them almost exactly. It’s safe to say that Butler did just that. Not long after I saw Elvis in theaters, I came across a video of Presley and Butler dancing the same performance side by side. It was uncanny. If it wasn’t for the fact that the video labeled who was who and the different camera qualities, it would have been nearly impossible for me to point out the actual Elvis.

Of course, no good movie plot is without an antagonist. Though he makes himself out to be the good guy in his narration of the story, Colonel Tom Parker took over half of Presley’s income in return for performance gigs, tours, merchandise, and television appearances. At the beginning of the movie, Parker admits that fans of Presley have accused him of being the ultimate cause of the rock star’s tragic death. It is no surprise that Hanks—being the incredibly seasoned actor he is—did an all-around fantastic job of portraying Parker.

Another feature of Elvis that should not go unnoticed is the visuals. From the vivid lights and colors to the intricate graphics, the images captured in this movie are ingrained into my memory as part of the film that I will never look past.

Every minute of this movie was absolutely beguiling. There was never a moment when I felt bored or wished that the film was over. When the lights turned back on and the credit scene started rolling with “In The Ghetto” playing in the background, Jessie and I were left speechless. Of course, as soon as we got in the car, we gushed over every minute aspect of Elvis that we adored while Presley’s music played proudly on the aux.

Before Elvis, I was not an avid listener of Presley’s work. Though I am still not a crazed superfan, his songs are now sprinkled throughout my regular musical regime.

Though I most definitely do not have the authority to classify a film as a cinematic masterpiece, Elvis has easily made its mark in that category.