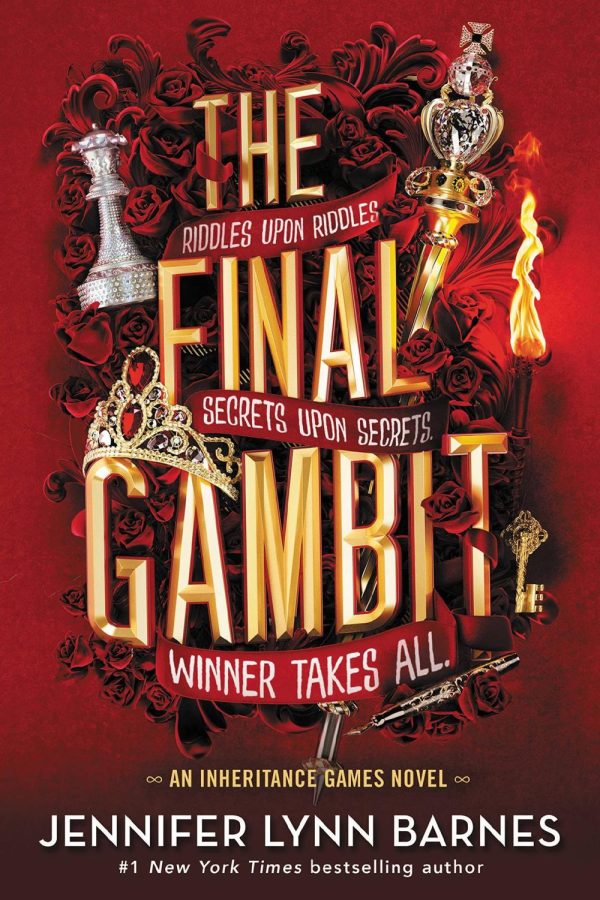 The third book of The Inheritance Games series by Jennifer Lynn Barnes.

When I walked into AP Seminar a couple of weeks ago and found junior Millie Alt reading The Final Gambit by Jennifer Lynn Barnes, I was beyond excited. I had forgotten that the third book of The Inheritence Games series was coming out soon. I immediately knew I would have to buy a copy and start reading.

Did I do that right away? No. I needed to buy a Kindle edition of the book as soon as I knew I would have time to read it all in one or two consecutive days.

This past weekend, my mom and I were babysitting a three-week-old baby, and it was finally time to start reading.

Usually, when I dive back into a series, I have to Google a summary of the previous book so I’m up to date. This was unnecessary for The Final Gambit. I had read the two previous books in the series not long ago, but my memory still wasn’t fresh. Luckily, The Final Gambit is an easy book to jump right back into.

Avery Kylie Grambs is almost eighteen years old at the start of the book, and she inherited $30 billion a year prior from a man she didn’t know, Tobias Hawthorne. She was thrust into a world of fame and fortune, along with a dangerous, disinherited family of the dead billionaire. The late Hawthorne loved puzzles. Naturally, on his deathbed, he decided to leave his family with one huge puzzle: why Avery?

Despite many near-death encounters, Avery was almost at the one-year mark of living in Hawthorne House. The conditions of Tobias Hawthorne’s will stated Avery must live in the house for a year before she would officially get the inheritance. Since Avery obviously can’t live out her remaining days of the countdown in peace for the sake of the plot, yet another life-threatening situation showed up.

Avery and the Hawthorne boys—Nash, Grayson, Jameson, and Xander—have to once again dive into the hidden clues of the house to save their own lives, and the lives of those they care about, from someone attempting to come after the family’s fortune.

The Final Gambit, like The Inheritance Games and The Hawthorne Legacy, is a fast-paced book. In my few hours sitting on my cousin’s couch watching a baby during a bachelorette party, I got about three-quarters of the way through. I only needed about an hour the next day to finish it.

I became lost in a world that I will never know.

A mansion full of puzzles and mystery would be my dream to explore. I’ve always had an affinity for escape rooms and scavenger hunts, and that’s the toned-down version of the Hawthorne House.

What I loved most about the mystery was that I couldn’t predict the result. It wasn’t a type of book where I could guess from the start what was going to happen. The book was written from Avery’s perspective, so I only knew what she did. There was no room for me to make predictions beyond what she thought.

Beyond the plot, I was caught up in the characters. While Avery was a wonderful main character, the stories of the Hawthorne boys also drew me in. All the boys were named after their fathers’ last names, which fed into all the mysteries of the series. Despite all being raised by the same man—Tobias—and taught his mystery-solving tactics, they would approach problems differently. They also all had different types of relationships with Avery; it was impossible not to appreciate them all.