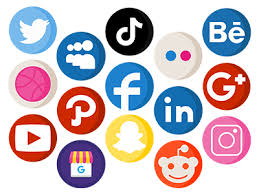 A brief explanation of social media

Social media is defined as a website or application that enables users to create or share content or to participate in social networking. It was developed to be a new way to communicate. Ads, in a way, are communicating a message, so I guess that counts.

It all started with Facebook, then the circle stretched and included Instagram, then it lengthened even more to include Twitter and Snapchat. Now a new social media app is popping up every other day.

We now have TikTok, Be Real, and the newest addition Gas in the social media bubble. Each app appears different from the other, TikTok is dancing and only videos; Be Real only allows one post a day at a certain time that varies; Gas is like a game taken to the next level; Instagram has a mix of pictures and videos; Facebook has community chat groups; Twitter is typically only words;  Snapchat is pictures and videos sent to specific people.

Listing these attributes makes social media platforms seem all fun and games. In reality, these social apps can sometimes result in not-so-positive interactions. An example of this is cyberbullying. Dictionary.com defines cyberbullying as the use of electronic communication to bully a person, typically by sending messages of an intimidating or threatening nature. This has made it impossible to escape bullies. No matter where you are they can follow you through social media and are constantly terrorizing you.

Thankfully, many people I have spoken to have not encountered a cyberbully and have only ever received positive comments on their posts. I have only been on Instagram for two months but can say my experience has been mostly pleasant.

However, advertisements have been infesting my feed. Ads are a clever way to target your brain and make you want to buy a product. Social media makes it easier for companies with a platform that reaches millions of people, which is great for the business and not so great for the users. Your brain associates a feeling with each ad. For example, if the ad involves puppies, you might feel happy. Then when you see the product in a store, your brain will say “oh look, the puppy product,” and make you feel more inclined to buy that product.

This is far from pleasant for the wallets of millions on social media, and it is increasingly frustrating to be ambushed by ad after ad, usually by some influencer, looking for more money. This tactic targets the brain influencing you to buy a product you never before would have wanted. In addition to this, your self-esteem can decline because you see all these people with the product, and if you do not own the product, clearly you are not “trendy.”

Influencers and other people regarded as socially cool are similar to an ad. They are selling what society wants a person to be. Many insecurities stem from social media, seeing what society says is beautiful by the number of likes and comments you receive on a post. I have already caught myself looking at the number of likes I get on a post; I then shake my head and recognize it doesn’t matter and look at the kind words my friends use to hype me up instead. Celebrities and influencers are not purposely making themselves an ad for beauty standards, but in the end, when looking at their posts, it is of utmost importance to remind yourself that these are professional photos, most likely edited, and you are still attractive. Actually, you look perfect no matter what society makes you think.

Social media is no longer used for just communication. It is also used to sell products and to make people famous. Communication is still deep in the bones of social media, and people need to be careful.