The 2016 Winter Collage Concert was a unique and pleasant performance 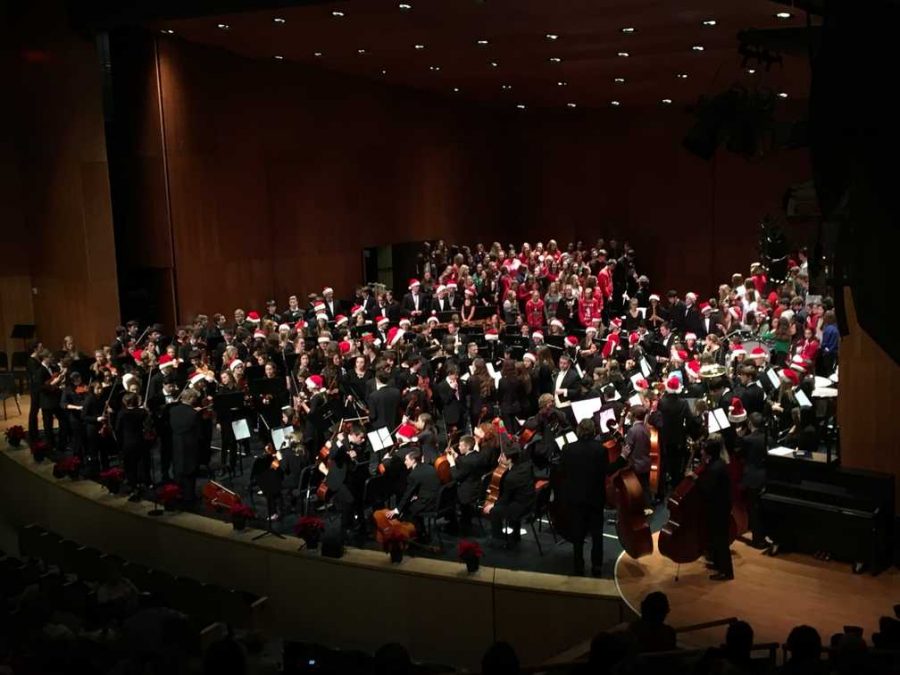 The Fine Arts Center was filled with sounds of chatter last night, but as the percussion ensemble, along with band director, Robert Ash, took the stage, a hush fell over the crowd. When the first sounds of calming xylophones rang throughout the auditorium, a universal feeling of peace and satisfaction overtook the audience. These emotions carried on throughout the entire performance, and although it was a lengthy concert, every second was worth sitting through.

Last night was the 2016 Winter Collage Concert, which included FHC’s band, orchestra, and choir ensembles. Each ensemble performed one to three songs and later wrapped the show up with a group performance. The atmosphere of the concert was truly unique, given the accumulation of students with a passion for music. Not only were these students able to share their passions with the audience members, but also with students in other areas of music, which is a rare ordeal. The eagerness in the students and attentiveness of the audience that made the approximately two-hour-long concert worth it.

Although the concert was branded as a “collage,” is seemed to flow almost seamlessly from group to group. Transitioning from the concert choir’s upbeat songs echoing through the auditorium to the jazz band’s laid back vibes filling the air didn’t feel awkward, it almost felt natural. On top of this, the lineup was arranged in order to prevent repetition in sounds. Never was there a back-to-back performance of a certain area of music, which kept the audience engaged and aware instead of growing bored of the similar-sounding melodies. The variety of song types was refreshing, not all of them were classic holiday tunes, nor were they all classic concert music.

The music at the “collage” was comforting yet strong, which was fitting for the chilly air just outside the doors. The crisp sounds of brass instruments followed by the clear, echoing voices of the choir, along with the relaxing sounds of strings being plucked and played in all the right orders kept me captivated, and comforted me during the middle of the dreaded winter season.

To end the show, all ensembles took the stage for one final song, “Sleigh Ride,” the holiday classic. It was a positive way to end such a unique show. Seeing the conglomerate of students sharing a passion for various types of music take the stage together and playing in perfect unison brought a smile to the faces of almost all the audience members. In all, the 2016 Winter Collage Concert provided the perfect winter tunes, and was extremely enjoyable to all those who came.