Collateral Beauty is an inspiring movie about Love, Time, and Death: 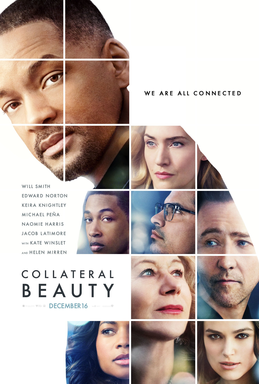 The newly released movie Collateral Beauty has become my number one favorite movie of all time. The movie begins focused on a man living an ordinary life and being happy as can be. Little does he know, his world is about to change. Tragedy strikes and he will never be the same again. Will Smith portrays Howard Inlet, a character that has hit rock bottom. After living through the loss of a loved one, the movie shows what his life has become multiple years after this occurrence. Howard has to choose between his life, driving in a direction towards a black hole of depression or a road to recovery. For the past two years of Howard’s life, he has spent his time playing with dominoes and writing letters to three things as a coping mechanism. And yes, he wrote to things; not people. The recipient of these letters are love, time, and death.

In the movie, it goes on to show Howard not only growing as a person in grief, but also a person meeting his greatest fears: love, time, and death. He finally gets to confront them and remove the metaphorical burden that has been controlling him for years and years. As viewers, we get a look into the depths of his heartbreak. Through the extraordinary acting of Smith, the audience is able to experience everything that is happening in Howard’s vast world, inside and outside his mind.

There is a slight twist of comedy in this movie, but it is mainly a drama.The ending to the movie is truly shocking and breathtaking. I would wholeheartedly recommend seeing which road Howard chooses to travel by. I would describe this movie as mixed up puzzle pieces that are not put together until the very last second, leaving a beautiful yet awe-inspiring outcome.