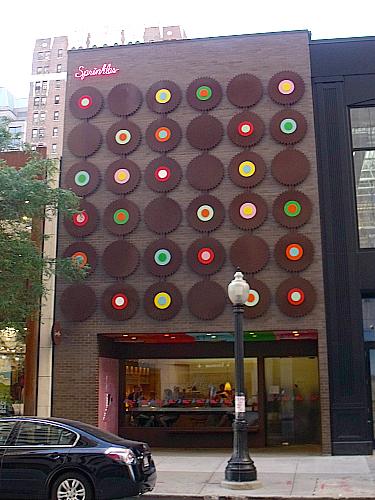 During this past break, my family and I spent a couple of days in Chicago. As we were walking around, stopping into stores and walking around, my mom decided it was time to go a place she’d heard about before, and it was conveniently very close to where we were. Of course, we decided to go, so within a couple of minutes we ended up in front of Sprinkles Cupcakes.

Sprinkles is located right off of the Magnificent Mile, located near any and all of your shopping needs. The store is tucked in from the sidewalk a bit, with a pink theme and a large, eye-catching window. To the left of the entrance, however, there is something that I’d never seen before: the Sprinkles Cupcake ATM. This is essentially a place to quickly pick up your cupcake of choice, a great option for someone who might be on the go with a sweet tooth. My family and I had time to spare, so we decided to go into the small store. 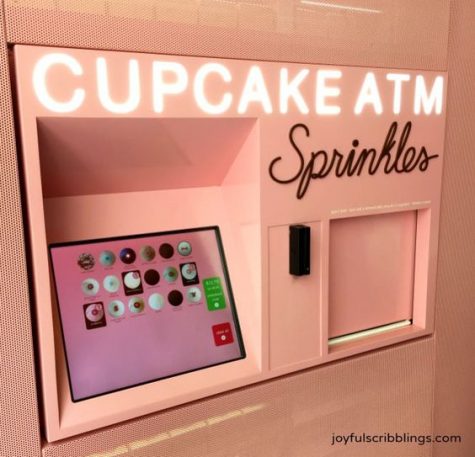 Walking in yielded a strong sweet scent, and we quickly found ourselves packed into the line. There were only a couple of people in front of us, but the store was so small that it filled up very quickly. I chose the Double Dark Chocolate cupcake, being the chocolate lover I am. The cupcake was very large, and unless you’re hungry or just really want cupcakes, you’ll probably only eat one. There’s a great selection of cupcakes, and it’s pretty easy to find one for everyone. With minimal seating inside, we found ourselves eating right outside of the store: a small bench; however, it’s not large enough for more than four people.

The Double Dark Chocolate cupcake had very light and airy frosting, with the cake being rich and dark. The sprinkles on top of the chocolate added a small, welcome crunch, and overall the cupcake was delicious. The one downside, in my opinion, would have to be the fact that I was very thirsty after eating the cupcake; you’ll need water, or whatever your beverage of choice is.

Sprinkles has locations all over the US, mostly in major cities. If you’re ever near a location and in the mood for a cupcake, I can absolutely recommend taking a trip to Sprinkles. It offers an interesting new concept in the Cupcake ATM, and great cupcakes with lots of variety in flavors. Offering something new and interesting, Sprinkles Cupcakes is one place that everyone should go to at least once, and you have nothing to lose but a few dollars.