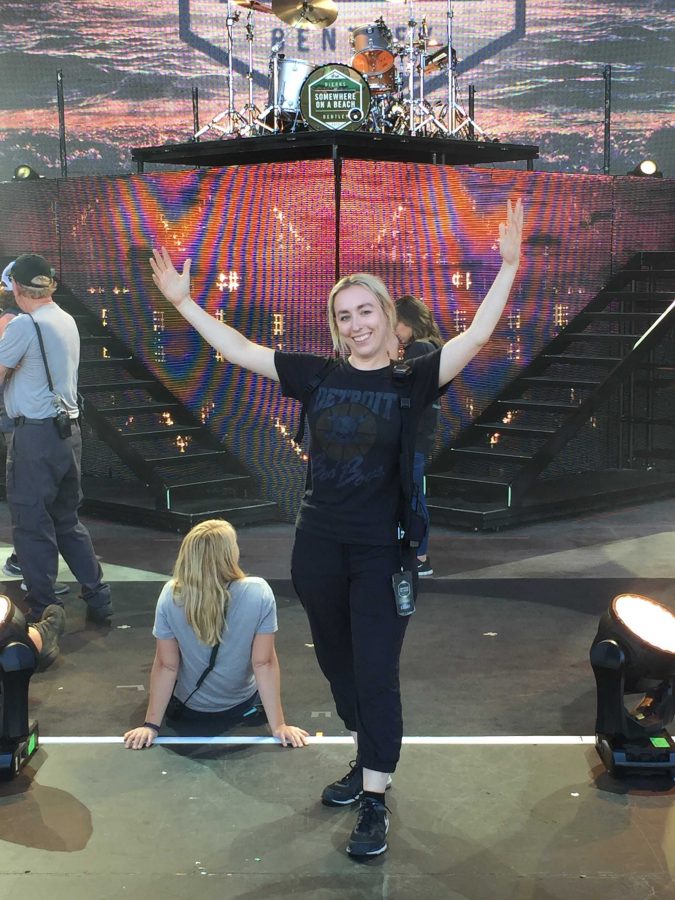 Music is something that everybody uses in their day to day life, but for 2005 FHC graduate Dani Gore, her large involvement in music and concerts is just a part of her everyday job. Working in the concert business may have been a dream at first, but through her hard work, she made her dream a reality.

“I wanted to [work in the music industry],” Gore said. “I didn’t think that was an option. I had no idea how to begin to take a path to get there. I got lucky for sure, but I worked really hard.”

While in high school, Gore was never involved in any musical ensemble, but she had a love for music. She quickly realized that she loved concerts and attended many throughout her high school years. After graduation, Gore attended a conservative Christian college for two years. However, that college was not a good fit for her. Gore moved back home and enrolled in classes at GRCC. There she was placed on a waiting list for the radiology program. When Gore was not taking classes, she began to look for something to do with her free time.

“I like college, and I like class, but I would rather be doing things,” Gore said. “So I would get bored a lot [since I was not in the radiology program].”

Gore was still attending many concerts in college, sometimes going to two or three in a single week. Since she was spending all this time at concerts, Gore decided to join a street team for a concert promoting company. In this street team, she handed out flyers and promoted future shows in exchange for concert tickets. Eventually, Gore contacted the company and got an internship working for them. In this internship, she learned how to work a live show and the box office for concert venues. This internship opened up many opportunities for Gore. She got jobs running shows and worked for many different concert venues, including The Intersection, Van Andel Arena, and The Palace. After working at The Intersection for two years, Gore was asked to join a tour with a band. Ever since then, Gore has worked for different musicians on tour. Currently Gore is the production assistant for Dierks Bentley.

Gore’s life on tour is slam packed with different commitments and activities. Every morning, she wakes up at around 6:30 a.m. and is not in bed until 2 a.m. During her day, she has no naps or breaks. She arrives off the bus in the morning and her first activity is going and assigning dressing rooms to the crew, her performer, and the opening band before anyone else is off the bus.

She then makes sure the items Bentley brings on stage are ready for the show later that night and creates the vibe room for the radio hang. The radio hang is where a country singer and the radio heads of the local town meet. In country music, the radio still determines the popularity and success of artists. A radio hang helps give the artist a personal connection to the radio scene of that town. After the setting up the radio hang, she makes sure that the needs of the crew and band are taken care of.

She also helps assist in the meet and greet. This often can be a highlight of her day.

“When you go to the meet and greet, it’s a tangible reward for what you do everyday,” Gore said. “You get to see people who are so grateful to meet an artist and maybe what [the artist has] done for them.”

The radio hang then occurs, and she makes sure everything runs smoothly. After the radio hang, the show “pre-game” begins. She helps Bentley prepare for the show and joins him and the crew for the pre-show “pow-wow.”

The show begins, and during the performance, Gore begins to break down the backstage area. During the show, she can never watch and has other duties she has to fulfill to help the show run smoothly.

Lastly, she completes the end of the load in by making sure the crew and equipment are in the correct buses and trucks and then finally, she can make it to bed.

While this is an extremely satisfying job, it does require some sacrifices. With this job, Dani has to spend a great amount of time away from home. She also has to make sure that her job is fulfilled and completed, no matter what the circumstance is.

With such little time off, it can be difficult. But while she may miss key life events, there are many great memories created on the road. The crew members spend so much time together and also can become close with other members working in country music. Dani gets to attend award shows with Bentley, which she recalls as being enjoyable events.

“[Award shows are] like a high school reunions because everyone knows each other in country,” Gore said. “You get to see a bunch of other country artists [and] their core people that work for them.”

Working in country music has it’s perks. Since the country music business is dedicated to spending time with family, Dani gets some time at home every week.

“With country, we all live in Nashville,” Gore said. “We’re home on Monday and Tuesday, and we leave Wednesday and come back Sunday. So we’re home for a couple days a week. It’s definitely a lot more family oriented [than other genres].”

Part of touring is also having to deal with an intense schedule for a few months, and then having time to relax. Gore will sometimes get to spend four months off at a time, but be incredibly busy the other eight months touring.

This career field can have its challenges. Gore has to be ready for whatever happens. Whether it’s working outside at a festival where it feels like 120 degrees outside, or staying on schedule the next day after losing two hours on the road, nothing is guaranteed. Because of Gore’s days being long and physically demanding, mindset is key to staying productive.

“Attitude is everything,” Gore said, “whether it’s working hard or just continuing to smile. We have really long days, I literally work 18 hours a day, and I don’t get a break, but having a good attitude makes the entire difference.”

Being a woman in the music industry creates challenges during Gore’s work day that forces her to remain positive and professional.

“It’s really hard being a woman on the road.” Gore said. “The industry is turning around, but I still deal with sexism everyday.”

However, Gore remains hopeful because her crew and boss are very empowering towards women. She also has seen many positive changes about the perception of women since she began to work in music; however, she believes there is still changes that can be made.

Gore’s hard work and drive has led her career to where it is today. She is valued by many employers because of her work ethic. Former employer Jimmy Rains, assistant general manager at The Intersection, believes her hard work is what made her such a valuable asset to the venue.

“Dani is the type of person who is always nose to the grindstone, even while maintaining a great workplace relationship,” Rains said. “She works extremely hard productively, and timely.”

Although success in the music industry is not guaranteed, Gore made the most of her opportunities to get where she is today. On top of that, hard work helped her excel above many others. The key secret to her success could be seen as luck, but to many, it’s much more than that. Gore is where she is today because of one thing: hard work.

“Work hard,” Gore said. “A concert for most people is somewhere they can go and hang out with their friends and have a good time, and people like to party, but for me, it’s a work day.”