The Women’s March is a reminder to speak up

This weekend, I saw something that changed my life.

I was lucky enough to see millions of women and men march the streets in support of the feminist movement (some supporting other minority groups as well). Seeing the floods of people taking to the streets supporting a passion of mine was incredible, and I am happy to say I got to see it.

As citizens across the country advocated the rights of women, some saw it as just protesting, but I saw people standing up for something they believe in. I saw people crushing the stigma that comes with feminism. I saw people united under one cause, a cause that I am proud to say I support.

I am a feminist – I believe the road to equality is a road that should and will be paved in the near future. The Women’s March reminded me of why feminism is important, and why I should be standing up for a movement I stand behind.

Society has come a long way in terms of women’s rights. While things may not be like they were back in the 1800’s, they are not where they should be. Everyday, women across the globe battle discrimination in the workplace, as well as assumptions based on their gender. Women are still struggling to be heard in leadership positions; they are constantly seen as the second-best option.  Society may have come a long way, but we still have a long way to go. 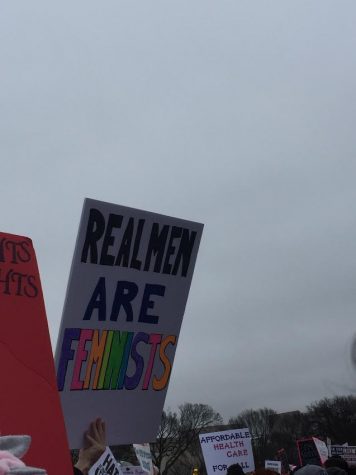 The idea of shaping society into a safe and equal place for all people is something that has its oppositions. People often see feminists as women who think all men are scum, and women should be on the top of the social hierarchy. However, feminism is not women trying to overtake men. It is brave women trying with all their might to bring women everywhere what they deserve. Feminism is a fight for equality, and the feminists of the world are here to win.

The Women’s March was a wake-up call to me, a call to keep fighting for what women everywhere deserve, to speak up on behalf of women across the globe, to make my goals of equality clear, and to hopefully inspire others to obtain what is rightfully theirs: an equal place in society.

This weekend, I saw something that I will remember forever. I saw something revolutionary, strong, brave, and important. I saw change marching the streets of America. Most importantly, however, I saw hope.