The Lumineers put on the concert of the year 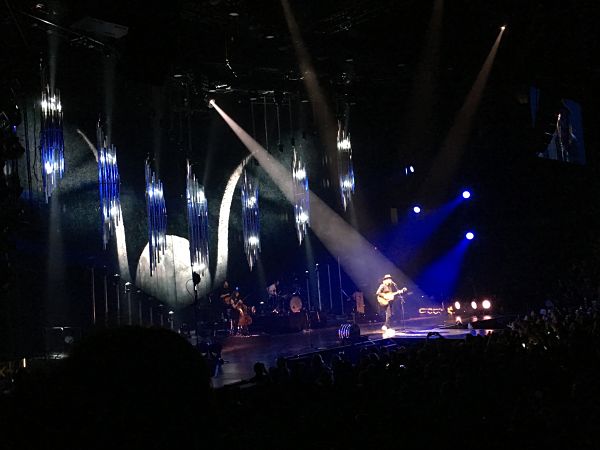 The excitement I had as I walked into Van Andel Arena for The Lumineers concert was unmeasurable. I was bouncing in my seat the whole way there, and could barely sit still through dinner. These songs made up my anthem. They gave me hope, provided a good beat to cry to, and filled my heart with smiles all depending on my day or the mood I was in. So to hear my anthem live in a concert was unreal. So perhaps this review may be slightly biased, but still incredibly truthful.

I am fairly well-versed in the world of concerts. I have seen everything from Hannah Montana to Ed Sheeran to Katy Perry to Kanye West. I have seen different atmospheres, including screaming six-year-olds to an arena of people engaging in high-risk activities; I’ve been outdoors in fields and baseball parks and crammed on the floor with hundreds of other people. Out of all of the concerts I have been to, the atmosphere at this one was the best. From the moment I walked in, I felt safe, and that rarely happens at concerts in arenas filled with thousands of people. Perhaps my guard was up walking in because the last concert I had been to was Kanye, and that atmosphere was a bi sketchy; however, but there was no moment that I glanced over my shoulder in fear. When we walked in the door security was strong but efficient. Each security guard was equipped with a metal detector as you walked through the door and another worker to scan your ticket. People were friendly, granted a little tipsy, but I didn’t notice a single person stumbling around or taking their fun a bit too far. In the middle of the concert, while my friends and I were at our seats, the man in front of us was going out to get a bottle of water and he turned around to go out of his way and asked if we needed anything while he was out so we didn’t have to miss any of the concert ourselves.

The concert itself was remarkable. After the opening act, which was an underground band from Chicago that fit perfectly with the style of music, the stage crew was incredibly quick at switching out the sets. Where it typically takes a half an hour or so, it only seemed to take them 15 minutes and they had music playing while they were working. There was not a single moment I sat bored wondering what was taking them so long.

Once the concert began, it was non-stop screaming and dancing, something that was a bit shocking for the alternative, folk-esque vibe The Lumineers project, but it was welcomed regardless. They sang an assortment of songs, covering most of their first self-titled album and their new album, Cleopatra, as it shared the name of their tour. I was pleasantly surprised as I listened to them play so many of their songs from their first album. I wasn’t expecting it in the least, but I was so incredibly happy to hear them.

I was also pleasantly surprised with how well the band performed. Not only did they sound spectacular live, but they engaged the crowd with every song they sang. Their lead singer, Wesley Schultz, was high energy and fun to watch. He talked to the crowd, telling them stories and singing intros to songs that never made it to the album. He also, shockingly (and to the protests of the security guards), he ran into the crowd to high-five and take selfies with audience members invoking screams and pleads for the perfect selfie.

At the end of the night, as I was running down Ottowa in heels trying to beat the crowd and get home at a decent hour, I wished I was still listening to the music. The Lumineers put on, by far, the best concert I have ever been to, and I wish I could have sat in that arena forever.