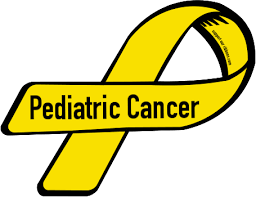 “Raising money isn’t our primary goal,” junior Emma Yoder said. “We are trying to raise awareness for Pediatric Cancer and raising money is only a part of that because we can give back to The Helen DeVos Children’s Hospital.”

Emma Yoder and Justin James both had the idea of raising awareness and bringing the community together, and decided to use their sport of basketball to achieve their goal. In years past, the school has donated to many organizations, but this year Emma and Justin chose the topic of pediatric cancer with the help of The Helen DeVos Children’s Hospital and other students.

“We decided on Pediatric Cancer because we are all still reasonably young,” Justin said. “Every cancer has a different color assigned to it and gold is Pediatric Cancer’s color; therefore, where we got the color for the game.”

Although Emma and Justin are the ones who are leading the planning, both the boys and girls teams have helped spread the word and also brainstorm ideas for making the game a success. Mr. Lowe has also been a big help with having planned the Red Heart to Heart game.

The Gold Game will be played against Forest Hills Northern on Friday, February 3. FHN is a returning opponent for both the boys and girls teams. With the tough rivalry, Emma and Justin are hoping that the crowds are large not only to support the players, but to support Pediatric Cancer.

“I think it will be a really good game. With there being a large crowd, the energy from everyone makes the game better,” Emma said. “The last time we played Northern, we didn’t have a good game, but this time, we are working better and expecting a win.”

All proceeds from The Gold Game t-shirts, bracelets, and donations taken at the game will go towards The Helen DeVos Pediatric Research Foundation. Also, the basketball teams have been hosting a toy drive in order to donate toys to kids who have to stay in the hospital. Along with the selling of shirts and bracelets, the Gold Game is also being sponsored by Pit Stop Barbecue and The Helen DeVos Children’s Hospital.