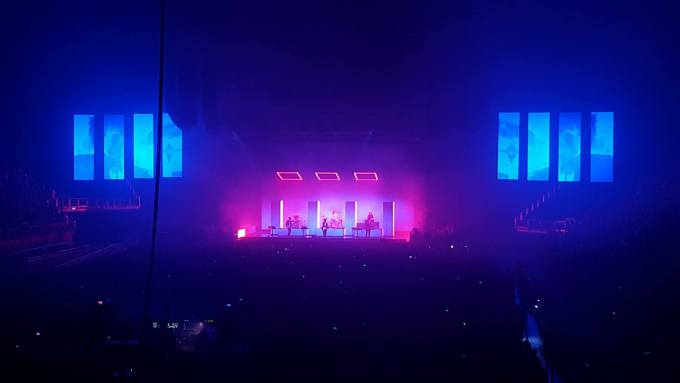 London’s O2 stadium: one of the biggest arenas in the UK, one that most artists strive to perform in during their career. Thundering beats echo throughout the stadium, masked by the cheers of the 20,000 people inside. This atmosphere provides the perfect setting for the concert of a lifetime, right in the middle of Central London. I was lucky enough to spend my second-to-last night living in England inside the O2, seeing one of my favorite bands: The 1975.

The 1975 is a band from Manchester, England, who are quickly becoming a leading name in pop music. They sold out two back-to-back shows at the O2 during their month-long Europe tour.

The 1975 play a combination of pop, indie, and rock music. Their fans know their dedication and commitment to their music, as their heartfelt lyrics will demonstrate. All music is written by their lead singer Matty Healy.

Through the past few years, The 1975 has become a household name in British schools, becoming famous for their popular singles Chocolate, Love Me, and Girls. However, throughout the past year, they have expanded their music globally, making it onto the Top 100 US Charts earlier this year.

From the minute I walked into the arena, the excitement from their fans was untold. They sold out the whole arena a month before the concert, and all 20,000 of us were buzzing with anticipation.

The Japanese House, an up and coming band, opened the show before The 1975 took the stage. Although their music was more relaxed, it was the perfect opener for the pop-rock hits that followed.

The second The 1975 took the stage, the entire atmosphere was transformed. Their opening song, Love Me, captivated the entire audience. It only got better from there, as songs from all genres, including pop, rock, and even blues were performed. The majority of their music came from their latest album, I Like It When You Sleep. However, they also performed hits from their first self-titled album, The 1975.

By far the best aspect of the show was their set. Although it consisted of just a few white panels, the projected images and accompanying light effects were the hit of the show. The images would change with every song and related to the words and rhythm of each one. The set corresponded with the music in every way possible.

All of the members of the band engaged with their entire audience, even those watching from three stories above. Halfway through the show, Healy even stopped and went into the audience to congratulate a couple who had just become engaged. These little moments made their show incredible.

In general, everything about The 1975’s show blew my mind. They had sideman John Waugh perform a beautiful saxophone solo halfway through the show that was unexpected but extremely gratifying. From the music to the set and atmosphere, The 1975 put on an incredible concert for their audience.