With an early surge of defense from senior Kyle Peirce and high powered scoring from sophomore Daniel Deindorfer, junior Ty George and senior Sal Sidebotham, the Rangers picked up a big conference win over Northview on Friday night 66-53.

The Rangers got off to an incredibly hot start on the defensive end, giving up only 13 points the entirety of the first quarter. Kyle led the charge with two big time blocks under the net to swing the early momentum.

Despite the score being tied at 13-13, the Rangers looked to have won the first quarter. Ty and Sal seemed to take over offensively. Ty not only finished the night tying his season high with 21 points but also shot 80% from the field.

“I was a little bit frustrated coming out, because last time I did not play well against them,” Ty said. “The last couple games I’ve played okay, just quiet. Today I came out and worked really hard in warm ups and got a good sweat going before tipoff. I just made it a goal to help our team as much as I could by knocking down as many shots as I could.”

Sal also had a huge night from beyond the arc, giving the Rangers a perfect 3/3 totaling 9 of his 17 points total. The Rangers overall shooting percentage was just over 69 percent. This proved to be costly for the Wildcats as Northview only shot a mere 42 percent on their offensive end.

“Ty and I worked really well together tonight,” Sal said. “Normally, Ty is the three point guy and I’m more the drive and kick, but tonight we were both hitting from three really well. All around, we played really well as a team, but especially on the offensive side we clicked really well.”

On top of the lights out offensive performance Friday night, the Rangers played excellent defense throughout the contest. Not only did Daniel have 16 points, but he also had a big time block to go along with four defensive rebounds.

The Rangers played complete basketball on Friday from minute one to minute 32. The solid performance was reinforced by head coach Ken George.

“I thought that’s about as well as we can play,” said George, who is currently in the running for head coach of the year through MLive. “We had some turnovers that costed us in certain situations, but defensively we were sound all night. Offensively, we didn’t do anything out of our comfort zone. When we do that, gosh that’s a lot of successful trips with a lot of great execution.” 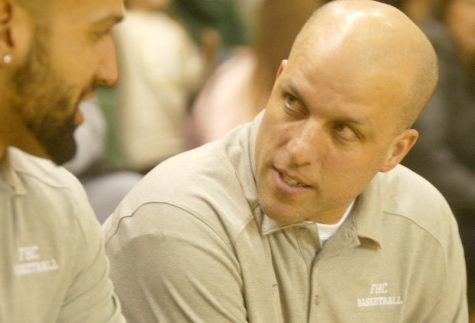