The no complaining project 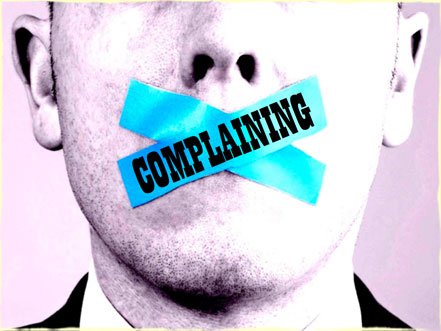 We all complain. There’s no point in denying it. I do, you do, we all do. It just seems to be a part of life. I have recently come to learn that although we all do it, it really does not help. It may temporarily make you feel better, but truth be told, it doesn’t change anything. So what would happen if we all stopped complaining for a month?

Jon Gordon, the author of The No Complaining Rule said, “When we complain, our brains release stress hormones that harm neural connections in areas used for problem-solving and other cognitive functions. This also happens when we listen to someone else moan and groan.” Complaining is equivalent to a second-hand smoke in that if someone around you is complaining, it affects how you feel as well.

Research shows that the majority of people complain at least once a minute during a normal conversation. Mumbling and grumbling is like eating a bunch of bacon– it tastes so good, but it’s so bad for you. People love efficiency, so we don’t like to do any more work than we have to do. So when you repeat a behavior, such as complaining, you are rewiring your brain to make it easier and more common for you to complain in the future. Over time, you find it easier to be negative than positive, regardless of what is happening around you. A study that was done at Stanford University revealed that complaining shrinks the hippocampus, the part of the brain that is required for problem-solving and intelligent thought. The hippocampus is the primary area destroyed by Alzheimer’s. Scary, right?

Complaining also releases a hormone in your body called cortisol, which is vital to your immune system. When the extra cortisol is released, it impairs your immune system and makes you more vulnerable to high cholesterol, diabetes, heart disease, and even strokes.

Those that frequently complain just want you to join their little pity parties. If you think about complaining being similar to second-hand smoke, would you sit on a bench all day next to someone smoking, or would you get up and leave? It’s the same with complaining and negative energy, you just have to distance yourself from the negative energy.

I want to make it my new little project to stop complaining about the little things that don’t really matter in the long run, and I urge you to as well. Who knew that complaining is actually bad for your physical health, not just your mental health? Do you think that you could go a day without complaining once? What about a week, month, or even year? Give it shot.