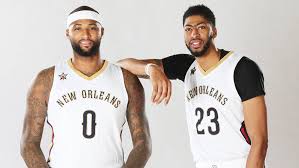 Trades and free agency have taken the NBA by storm in the past year, as teams have made acquisitions that most never deemed possible. Kevin Durant left the franchise he built to join the “super-team” in the bay in what some say was the “most cowardly decision by a star” that the league has ever seen. Dwyane Wade left his long time home in South Beach and returned to his roots, as he teamed up with Jimmy Butler and the Chicago Bulls. Derrick Rose, Joakim Noah, and Courtney Lee packed their bags for the big apple, as they joined the New York Knicks, a predicted superteam. 2015 NBA champions, Andrew Bogut and Harrison Barnes, were shipped off to Dallas to clear cap space. These free agent moves during the off-season came as a shock, but nobody would have guessed the trade that would go down at the All-Star break.

With the trade deadline winding down, the New Orleans Pelicans took a stab at one of the league’s premier big men. The trade involved the Kings star Demarcus “Boogie” Cousins along with forward Omri Casspi. The Pelicans gave up rookie shooting guard Buddy Hield, guard Tyreke Evans, guard Langston Galloway, a 1st round pick, and a 2nd round pick. Cousins has often had issues with coaches in Sacramento, and his name has been thrown around in trade discussions for a while. ESPN analysts believe the Sacramento Kings should be ashamed of themselves for trading Cousins away, but it was time for a change. With Cousins heading to New Orleans, there are a lot of questions to be asked. Will Cousins and Davis mesh well together? Will cousins have issues with the coaching staff? Will the Pelicans turn it around and make the playoffs? On the flip-side, the possibilities with these two teamed are endless.

They averaged 29 and 27 points on their respective teams in the first half of the season. Davis averaged 11.9 rebounds, while Boogie averaged 10.6. Cousins was the 5th pick overall in the 2010 draft, while Davis was picked 1st two years later. There is no question that both these players can and will put up big numbers, but rather will they mesh together to form a successful team?