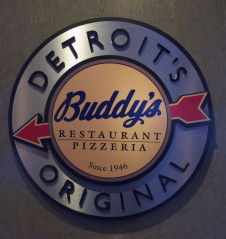 The wrestling individual state championships have been held at The Palace of Auburn Hills for quite some time now. It has become a tradition for eleven years now to go to Buddy’s Pizza, a restaurant near the wrestling facility, and have dinner during the break leading up to the final matches. Fortunately, this year I was able to join the tradition and experience “Detroit’s #1 Square Pizza” for the first time.

The restaurant is very family friendly. It has many colors popping on the walls. It has many pictures that catch your eye, no matter what direction you are facing. From my understanding, there are eleven locations total. It was originally established in the 1930s as a neighborhood tavern, although Buddy’s famous square pizza was not created until 1946.

Since they are known for their square pizzas, it only made sense for me to order one to munch on. I split one four-square cheese pizza with the person I attended the restaurant with. I was warned before our food was served that the pieces were monstrous. Little did I know, they were not exaggerating. The price of the pizza was $9.49 – which first made me hesitant to order it – but once the pizza came to us, I realized that you truly do get what you pay for.

The pizza was unique in the way it was made. It started with crust on the bottom, then cheese was added on top of the crust, and finally, the sauce was on top of the cheese. This was definitely strange, but I thought it tasted excellent. I prefer to have very little sauce on my pizza. So, this made it easy, and not messy, to remove a small amount of the sauce without removing some cheese as well. The group of people we went with all ordered the Buddy’s Seasoned Fries in a basket for $4.99. These came in a big basket filled over the top with wedge-cut fries. The seasonings they were cooked with were very delicious.

The atmosphere within the restaurant was very joyful. Every table and set of chairs were equally organized throughout the entire building. The bathrooms were crisp and clean, as well as the dining area. The staff was incredibly friendly and talked us through the menu when we first arrived. They checked up on us throughout the dinner, but not too often.

All in all, I can say Buddy’s Pizza was a very pleasant experience for me. I would recommend it to anyone who wanted to go out with friends for a quick dinner or to a family that wanted to have a nice sit-down meal together. I will definitely be back next year to continue the tradition.