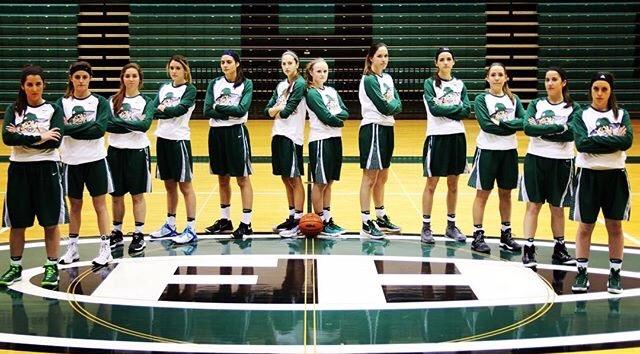 As fall came to a close and winter started to creep around the corner, athletic director Clark Udell was still struggling to find a new varsity coach for the girls basketball team. When he finally chose, he decided on Kristina Prins, a former Ranger athlete.

“She was the best candidate that applied,” Udell said. “She has good basketball knowledge, and she has a lot of passion for the game. We knew she would make the girls basketball program intense and competitive, but fun.”

Prins said she was informed that she got the job two days after her wedding day. She also said the week of her honeymoon gave her the time she needed to process everything: what offense and defense she wanted to run and who she wanted to coach with her.

She decided upon three assistant coaches, Kendra Beckman, Kate Mason and Chelsea Meador. Beckman played at Cornerstone and has coached for over 10 years, including assistant coaching Prins. Mason is her twin sister who she played with for three years on varsity basketball. Meador played at Lowell and was a rival of Prins, the two also coached together five years ago.

Prins herself was a former coach and athlete at FHC. She was the assistant basketball coach for five years ago and the freshman volleyball coach for four. Prins played point guard for varsity basketball for four years. She played alongside her sister for three of them. Not only did she play basketball, but she also played soccer and volleyball. Prins was libero on varsity volleyball team and played sweeper on the soccer field.

Playing many sports, Kristina was able to earn herself some rewards. In 2008, she was a soccer state champion. She held the record for most varsity letters at FHC for a long period of time. Both her and her sister were awarded with female athletes of the year their senior seasons.

“It’s a cool thing to say you are the varsity coach at your old high school,” Prins said. “It brings back so many memories, and it’s cool to see both sides as a coach and an athlete. I think it’s also helped me relate a lot more to these girls.”

Throughout the season, the team was able to meet and connect with Prins. Over the four month period, the players got to know her rather well.

“Our coach last year was very unapproachable,” said senior Paula Shields. “It was nice to have a coach that we could go up to and tell her how we felt and know that she was really listening to us and wanted the best for us.”

Sophomore Claire Baguley says Prins was always very positive. According to Claire, she brought out their confidence and motivated them to play well. Not only did Prins connect with the girls on the court, but she took the time to get to know them outside of the sport.

“She got to know us individually,” senior Maddy Smith said. “She knows every sport everyone plays. She knows what we like to do; she’ll just bring things up about ourselves when we talk. It helped her connect with us at a coach to player level, and because of it we were a close team.”

Prins was hired late September, while the season started early November. Because she was hired so late, she only had around six weeks before the season started to meet her team. She was unable to run practices and camps over the summer but with having as little preseason time as she did with the team, they were still able to get second in the conference.

“With the amount of time preseason we had, which was very little, I thought she did really well,” junior Madi Winter said. “We didn’t put in a ton of work over the summer, because we didn’t have a coach or anything.”

Over the next few seasons, Prins hopes to establish to create a team that establishes dominance in the area.

“I can honestly say, I cannot wait for next season,” Prins said. “I want to go into each year excited for the next. We have a great group of girls coming in and a bunch of returners who have a bitter taste in their mouths from the last game of this year. I think this summer will be a big one for us.”

“Gosh, I don’t think I have enough words to describe how freaking awesome my seniors were this year. Maddy Smith is an absolute freak. She can score, defend, and was our quiet leader. Then, we have Paula, who has the PRETTIEST shot I have ever seen. She was quiet, but man did she work her butt of each and everyday. They brought poise and leadership to this team, and the girls just adored them. I wish we could have them back, but I cannot wait to see where their futures take them. The future is bright for these awesome ladies!” – Coach Prins

“Girls basketball. Thank you for the most amazing two years! I loved coming to practice everyday knowing Maddy and Paula would put a smile on my face. I’m so blessed to be have been able to get to know both of you, and I wish we could keep this year on repeat. All the laughs, the awkward looks in the hallway, and the adventures. I thought my first year on varsity was awesome, but this past year has been the best one yet thanks to you guys. I love you both so much, and I’ll miss you next year!” – Emma Yoder

“Thank you so much for everything you guys have done for me. I look up to both of you, and I’m going to miss you like crazy. I always looked forward to coming to practice knowing I’d laugh at all the shenanigans that go on with you two. Maddy and Paula, thanks again for being the funniest, kindest, and most genuine girls. I’m so excited to see what you both will do in the future.” – Madi Winter

“I wish Maddy and Paula the best of luck wherever they go. They are great teammates and even better friends! I’m grateful I got to play with them for two seasons; the next two years won’t be the same without them!” – Claire Baguley

“Thank you for making this an amazing season! You are both awesome on and off the court! We couldn’t have done it without you!” – Breanna Probst

“If I were to have any two seniors, I’m happy it was Maddy and Paula, because I consider them really good friends and amazing teammates to have for my first year on varsity. I love them so much and will miss them a lot.” – Ashley Lutkenhoff

“It was a ton of fun playing with the seniors this year, and the whole team will miss them a ton next year. I wish them the best in college.” – Selina Franovic

“The team would not have been the same without Maddy and Paula. Their love for the game, and their encouragement pushed us all to be the best we could be! I’m going to miss dancing with Paula in the locker room and Maddy’s sense of humor!” – Ellie Metallic

“The seniors on our team were amazing. I am so glad that I have gotten so close with them, and I cannot wait to see what they do in college. They are both amazing, and I am so glad I got to play with them.” – Emily Obermeyer