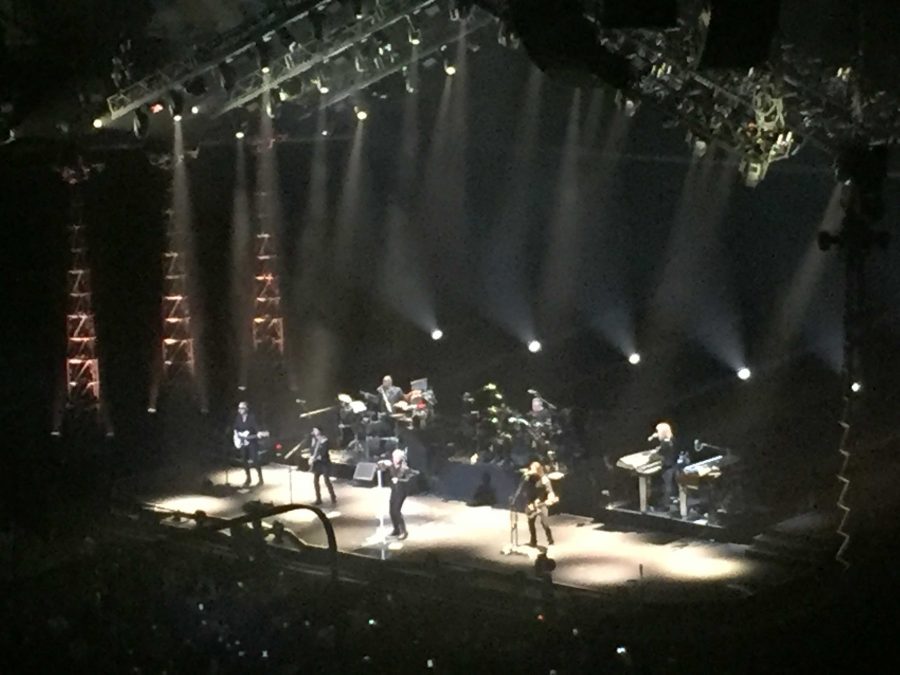 I believe I was born in the wrong generation. Not because I love big hair and spandex, but because of the music. All of the music from the entire decade of the 80’s has a way of pulling you in and hypnotizing you into staying. Last night I had the opportunity to go with my family to a concert that I have been waiting to see for my entire life to see: Bon Jovi.

As I was telling my friends that I was going to see this amazing band perform, I could tell that they were not as ecstatic as I was. Some would ask me, “Who are they?a�� or “why them?a��. But my teachers, on the other hand, were over the moon. Many of them asked if they could come in my suitcase or if I could sneak them in. And although we both knew I couldn’t, I wish they could have experienced what I did.

I have been listening to this band for as long as I can remember. Honestly, my parents probably played one of their songs on the way home from the hospital. I remember car rides with my dad to school when we would come close to blowing out the speakers in his truck we had it so loud. By the time I was four, I had two albums committed to memory. By the time I was 8, the next five were in my brain. At 12, I knew half of the 21 albums. And now, as I am 17, I am proud to say I know every song, every word that this band has ever put out. Sure, I know some songs better than others and there are some chorus’ I can throw down like you’ve never seen before, but I take pride in knowing all of this.

Last night, I was able to sit in a box and not be crowded by people and intensely enjoy what I was watching. I was sitting knowing that is what all of those car rides with almost blown out speakers led up to. During the days leading up to the concert, I wasn’t finding much excitement inside of myself. I would look at my parents and see them almost unable to wait, and I really wondered why. But when Bon Jovi took the stage I knew.

The lights went dark. The stage, under a blanket of black. I could see objects moving as a screen lowered in front of them. Then the intro began. It was like nothing I had ever seen before The band had made a custom intro for every city they went to and after it was over the Indianapolis crowd went wild. Then the first chord was struck. And after hearing it, even I went a little nuts. After the first few chords were struck the screen changed. It showed a house, portraying the cover of the album and the name: This House is Not for Sale. Then Jon Bon Jovi began. He sang hit after hit. He introduced his band, newer members and old. And then he started to tell a story. He explained three songs on his new “record” and why he wrote them. He explained the band decided to name the album what they did and he made it very personal. I loved that. But not everyone in the crowd was a fan of his stories like I was, so he then promised hit after hit. A promise in which he fulfilled. And then after one encore, it was over.

This event that I have been waiting my entire life to see and experience was over in two and a half hours. It was just, done. The stage was being taken down and the band was getting ready to go to their next stop. Although it is over and I most likely won’t see them in concert again for a while, I thoroughly enjoyed every minute I spent in Bankers Life Fieldhouse with my family watching someone who has created music that has changed my life. As I was sitting on the steps in the suite because someone kicked me out of my seat, I realized that Bon Jovi’s music has changed my life. It has gotten me through so all of the hard times I have been through. He has songs for everything, any problem one could have.

After writing this, I do not wish to be born in the 80’s because I love my parents and I like it here. And I hate big hair and spandex too. But I wish we could bring the 80’s to the 2010’s. We could bring back respect, good music, and down to earth people. We wouldn’t have to deal with so many things. Back then people respected their parents, they all worked their way up the food chain instead of being handed things. We could bring back hard work.