This Lullaby is not your typical love story 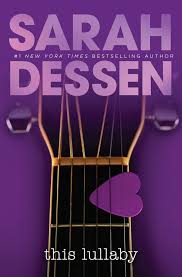 Different than your typical love fantasy, this one has a unique and unusual ending. The story, This Lullaby by Sarah Dessen, is easily relatable for most teens going through the journey of life.

I was recommended this book by a friend and my initial thought was “no way.” She urged me to read it, saying that it was not the normal “boy meets girl and falls in love” story. It took a little while until I finally decided to give the book a shot. When first getting it, I thought that the cover was completely stereotypical. It is purple with a guitar and a heart guitar pick stuck in the chords. I pushed past the cover and started to read the words spread across the pages. I instantly was captivated as I got to see inside a cute and confusing relationship.

The “ideal boyfriend” image varies from girl to girl, but the one type of boy that the main character, Remy, will not date is a musician. Her father was a musician and wrote a song for her called “This Lullaby.” He soon leaves Remy and her mother, letting them fend for themselves to advance in life on their own. This song haunts her throughout her life and doesn’t have a good memory attached to it. Soon, a boy named Dexter crashes into her life– literally. They keep seeing each other coincidentally, but then it becomes more than that.

The two become inseparable. Remy goes to all of the concerts that Dexter’s band play. Dexter joins Remy at all of her dysfunctional family functions. The kicker is that Remy only has relationships during the summer time– think of it as a “summer fling.” She does not like to get attached; instead, she likes to strictly have fun. Dexter has a different effect on her and that surprises her. She can love someone, and she does love Dexter. That is, until she has to leave for college, or is it?

This book is easy to follow and even easier to love. I would recommend it to anyone that likes romantic stories that are not too mushy. I found myself always trying to sneak in some time to read a few more pages. I became attached to the characters. I felt the hurt that Dexter felt when Remy became isolated with her emotions. I also felt the struggle when Remy expressed her thoughts and confusion throughout their relationship. This story ends with an ending full of wonder and a slight cliffhanger. I am left to wonder about the Remy and Dexter relationship and where their future will take them together.