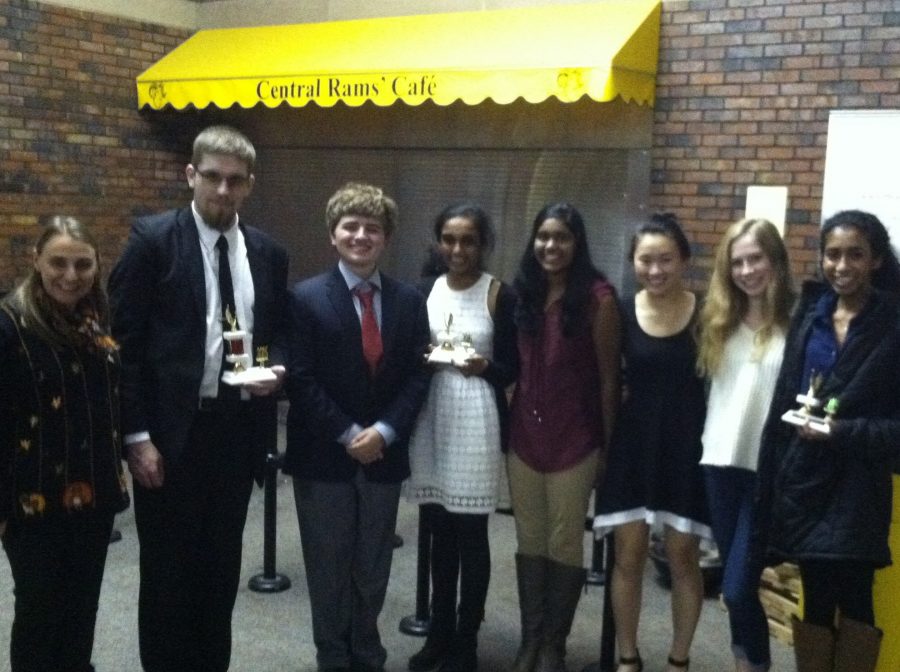 Junior Isabel Varghese, a high-reaching student, has found her passion. She has taken her love of knowledge a step further by joining the forensics team. Practicing on Mondays and Tuesdays with the team as well as on her own, Isabel’s hard work finally paid off when she received fourth place at regionals, qualifying her for a spot at states on April 28th and 29th.

There is more to forensics than just public speaking, although that is a major aspect of the club. It is also a way to harness an inner confidence, as well as utilizing the best of your knowledge to prepare a six-minute speech and perform it in front of judges and other peers.

“[In forensics], there are different individual events that each person can be a part of. So depending on what you’re interested in or what is suited to your personality, you can join or take part in the event that [fits you best],” Isabel said.

“Isabel is brilliant. I would say she is very hard working and doesn’t always think she is as good as she is,” Medford-Conley said.”She headed into this season with a lot of self-doubts.”

To make the season even more nerve-wracking, this past year Isabel lost passion for her original category, which was Poetry, and switched to her current category, Impromptu.

“[Isabel] did Poetry last year [which was] probably not her best event. She’s not really dramatic and theatrical. She moved into Impromptu and it’s a very competitive topic,” Medford-Conley said.

Isabel agrees that Poetry was not her strong suit, and Impromptu is much more suited for her personality.

Isabel’s passion in her speeches helps her succeed in the competition. But with such a competitive topic, Isabel also had to practice harder to prepare herself for the competitive events.

“She didn’t really believe in herself, so we spent a lot of time doing six-minute speeches. She spent about three hours a day [practicing] that week before regionals. She knew the competition was really fierce in our region for her specific category,” Medford-Conley said. “[Isabel] had to beat several people to be able to qualify for state finals. The state champion is probably in our region, [but] she did it. She pulled it off.”

Practice makes perfect, along with a couple of AP classes and a love of learning.

“I remember the first time I did [a speech]; it was really nerve-wracking. But then the more you do it, the more you realize that there are patterns that you can find out. And if you have a good chunk of knowledge [it’s helpful], which kind of contributes to the kind of classes I take as well,” Isabel said. “AP Lang, for example, really helps me with [forensics] because you have a lot of history going on in AP Lang, which I can tie into my impromptu speaking. It really depends on how much you know and how much you like to speak about things.”

On top of all the practice, there is a lot of background knowledge that goes into each six-minute speech.

“She reads a lot and she is very smart. She remembers what she’s read so that [subject] kind of fit her as soon as she could become confident in that,” Medford-Conley said.

Another major key to Isabel’s success is Medford-Conley. With past experience of being on a forensic team of her own in high school, Medford-Conoley gets to continue her own passion of helping students with the art of public speaking.

“Public speaking is an enormous skill and it’s one that many, many people can not do– brilliant, capable, amazing people that can not communicate effectively in a public fashion. If I can help people gain that skill, that’s huge,” Medford-Conley said. “It’s very empowering for me to watch them do it and then to get to see them go off out into life and become amazing people and utilize that skill.”

Seeing Isabel grow and learn how to communicate effectively in a public fashion is one of the reasons Medforda�� Conoley enjoys forensics so much, but to her, there’s always room to grow.

One area of forensics that has to be conquered in order to succeed is a fear of public speaking – if one can vanquish this fear, there is a much greater chance of succeeding.

“Public speaking is hard and [forensics is] not publicized as much. Not many people know such a club exists. When you say forensics, people don’t know that it’s the public speaking kind,” Isabel said. “It’s a matter of practice and most people are kind of nervous about public speaking, because believe it or not, it’s actually the number one fear in the United States; so it’s kind of understandable why people are nervous to join forensics.”

While public speaking may be slightly daunting, it is through forensics that Isabel has made some of her closest friends. It also provides an extremely beneficial life skill to students. Through going to different tournaments, she has bonded with the team and learned about herself as well.

“[Forensics has] garnered a new sense of confidence in me, as well as that it’s something I really love,” Isabel said. “I really hope to [continue] this for my senior year. We’re hoping more people join next year because once our seniors graduate, we will be short on members.”

Keeping that in mind, to those who are nervous to try forensics – it is an amazing opportunity that, people like Isabel and Medford-Conley, are very passionate about and willing to help along the way.