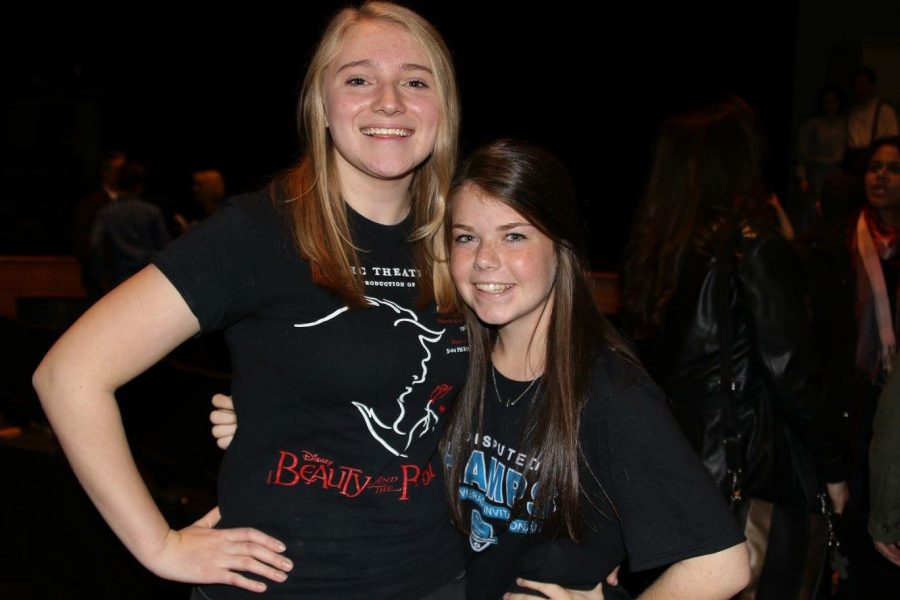 This year, like every year, the theater program has graced us with a multitude of phenomenal shows: Murders in the Heir, the improv show, Random Acts of Talent, and Little Shop of Horrors. However, this year marks the first time that the community will have the opportunity to revisit the shows through the brand new Encore show. The upcoming show will consist of a never-before-seen ending from Murders in the Heir, some games from the improv team, a few acts from RAT, three songs from Little Shop of Horrors, and even some scenes and games from the students in Theater 1 and Theater 2.

Plans for this show first began to formulate last spring, when teacher and managing director Robbin DeMeester approached this year’s student director, senior Emily Toppen, and assistant student director, junior Kaley Kaminski, with the idea. Because Tony Night-FHC theater’s recognition night- would be the following week, DeMeester had virtually no time to devote the amount of time to Encore that she usually would to other shows.

“So we would help [DeMeester] with other shows-like student directing it- but [Encore’s] 100% us,” Emily said.

“She’ll help us with the parent/guardian thinga�� but this is our show to take the reins on.”

“This show is different for me because Emily and I are completely in control and in charge of it,” Kaley said. “So there’s no one to report to besides each other. It has been kind of hectic, and crazy, and stressful. But we are trying our best. And I’m so glad I have Emily because I would not be able to do it without her.”

This new duty is as exciting as it is difficult.

“I’m just really excited for it because it’s a show that Kaley and I were given to do ourselves,” Emily said. “And it’s something we got to design and create that’s completely brand new.”

Encore is new territory for the cast and crew of the theater program as well. They were first told this show would be on the horizon during rehearsals for the musical.

“At first, because everyone was so exhausted after musical, they were like “oh, okay,a��” Emily said. “But [later] they were super, super excited. [Reuniting the cast is] like a family reunion.”

Kaley also noticed some less overjoyed reactions upon announcing the Encore show. But as time has worn on, the casts have grown to be grateful for the opportunity to return to the shows.

“I’ve had so many people come up to me and say, “I’m so glad we’re doing this show because we get to get back together with our gang,a��” Kaley said. “Each cast from each show creates their own little family; they call it a family reunion.”

Even those who were not reuniting with casts, like junior Sarah Hubble who will be singing with her brother, were excited for Encore.

“I was super excited to be able to sing again because Random Acts of Talent was so fun and special for me because I did it with my brother,” Sarah said. “… [RAT] just has a special place in my heart.”

Seniors, especially, are thankful for the opportunity to perform one last time.

“Typically [during] the musical, seniors cry because it’s their last show,” Emily said. “But [this year] we knew the Encore was coming up. So now that it’s really here, everyone’s getting really nostalgic about the whole thing and really appreciating the times they have together.”

The casts’ familiarity with each other and with the shows proved to serve as an advantage during rehearsals.

“Everyone’s more comfortable with each other,” Kaley said. “So things are a lot more goofy and a lot more deep. I feel as if it’s easier, and I definitely think we’re more efficient.”

“[Preparation has been] really easy, because the kids know what they’re doing at this point,” Emily said. “So, it’s not learning anything new. It’s just restructuring it and making it flow together.”

Sophomore Gretchen Shull, who will be performing once more in the musical and in her beatboxing act from RAT, as well as with her Theater One class, also found rehearsing to be easier the second time around.

The musical felt great to practice because everybody already knew the show,” Gretchen said. “And since we all knew the songs already, we were just allowed to have fun with it.”

As of now, the participants are feeling fairly comfortable about the impending performance, as it is an encore performance.

“I definitely feel more relaxed this time, just because we’ve done it before and it was so fun,” Sarah said. “I’m just excited to do it again.”

“I feel more relaxed going into it because I’ve already performed outside of class, so I am excited and a little nervous to perform it at Encore,” Gretchen said.

Though it is a repeat performance for most participants, Kaley has a new challenge to take on for the Encore show. She will be calling Friday’s show, as Emily-who usually calls the shows- will be busy hosting the show with DeMeester. Kaley will be in charge of directing lighting, sound, props, backstage crew, etc. Moreover, this is her first time doing it on her own.

“I have to be the one to say “yes, lights go.a�� And if it’s the wrong timing, it’ll mess everything up,” Kaley said. “The whole show kind of rides on my voice. So that’s terrifying. But I think, all in all, it’ll be rewarding. And, it’ll be a good experience to have under my belt for next year when I have to call play, musical, and all the shows.”

Indeed, this experience will be preparation for when Kaley is student director next year and in charge of calling every show.

Despite the daunting task ahead of Kaley, Emily is confident that everything and everyone -the performers, crew, and Kaley- will fall into place.

“I know that the kids already have everything set in their mind,” Emily said. “… So everything’s ready to go, it’s just tying it all together in that fluent strand that’s going to happen [this] week.”

All things considered, the show is expected to be a crowd-pleaser.

“I think people are really going to enjoy it, because I think the show’s going to go pretty fast-paced, to be honest,” Emily said. “I think it’s going to have something for everyone.”