The Central Trend • May 7, 2017 • https://thecentraltrend.com/17779/showcase/fhc-graduate-ali-roys-enters-competition-to-go-to-cinema-makeup-school/ 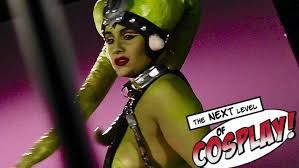 Nestled in a small corner of Los Angeles sits the dilapidated Wiltern theater.

It is lacquered with layers of turquoise paint and, on one side, has old marquees displaying the names of shows playing soon. But if you round the corner, the marquees vanish and something new is displayed. In large letters on the side of the turquoise building, it reads Cinema Makeup School (CMS).

2016 FHC graduate Ali Roys is doing everything possible to call this school home.

If you choose to walk inside the doors, you are faced with, most likely, enough special effects makeup to fill dozens of movies. Here, students learn to mold things that resemble body parts and make a face look completely different.

Cinema Makeup School is one of the top makeup schools in the country. According to Ali, no other special effects makeup school is quite like this one. At CMS, you have the ability to work with world-renowned makeup artists and have them critique your work, but the ticket in is over $20,000.

Because of the school’s tuition price, the school created the Next Level of Cosplay scholarship.

“For this scholarship, I had to create a character from any film. That is what cosplay is, essentially. I chose Oola from Star Wars because it involved beauty makeup, a full body paint, and creating something crazy, like the tentacles on her head,” Ali said.

In order to create Oola, it took Ali over 3 months, many bottles of body paint, and several cotton balls. But, it took a lot more than it seems.

Knowing that she had never tackled something on this scale, Ali knew it was going to be a time of trial and error.

“When I ordered the green body paint [for Oola], I ordered a paint called Paradise Paint by Mehron [in lime green],” Ali said. “It is something many professionals use, and it worked great; however, it was not the same color.

The actress who originally played Oola had very dark skin, which showed through the green paint to create the character, while Ali’s model had much lighter skin. So to create a close to exact color to use, Ali had to mix several colors together.

Using that complex method, it took Ali, in total, around 5 hours to completely paint her model’s body. And after the full body paint, Ali had to airbrush her model to match the headpiece she had created.

According to Ali, the headpiece was a completely different monster to create.

The making of the lekku, or tentacles that are atop Oola’s head, was a series of trial and error, too.

“I made [the lekku] in two separate parts,” Ali said.  “The actual headpiece, which was like a helmet on [the model], and then there were the tentacles; together, they create the lekku. The headpiece took seven times to create, and the tentacles took four. And to put them together, it took two times.”

It took Ali three months to create Oola in her entirety, but the first two months were spent creating and destroying because they did not meet Ali’s standards and expectations. Because she had to create Oola on a budget, Ali did not have access to the materials to create the tentacles and the headpiece “the right way.” So, she made them her own way.

“Normally, one would create a cast of the face and entire head of the model, and from there, I would sculpt on top of the face and mold so the cast would then make the prosthetic,” Ali said. “So, what I did was sculpt an idea of what I wanted it to be, heavily saran wrapped it, and paper mached on top of it. [That way], I could get the ‘positive’ without having to buy all of the other materials for it.”

She then paper mached multiple balloons and built them on top of each other to create the head shape she wanted. But she couldn’t leave it at that. She decided to put masking tape around the entire headpiece, along with foam to create the shape she wanted, and layered it again with liquid latex in order to conceal the seams of the tape.

As for the tentacles, it was the same process. Ali had to sculpt what she wanted them to look like, and then paint multiple layers of liquid latex onto the cast. After the latex dried, she peeled it off and stuffed it with cotton balls. After finding a rare video of Oola dancing online, she then realized that she needed to add something to make it move the way she wanted to.

“I actually added two separate weights,” Ali said. “I added 16 cents, a dime and six pennies, taped together in the bottom of the tentacle. Then, I added another [weight]. That made me have to design the tentacle differently and into two parts.”

Ali took the part of the tentacle that was attached to the headpiece down to the shoulder blade, rounded it off, and sealed it. Then, she took the rest of the tentacle- the part that tapers down- wrapped it in masking tape, and layered on more liquid latex. These two pieces created a point of movement for the tentacle. Ali’s goal was for them to move like crazy.

A week before filming the video that had to go along with the scholarship, Ali found one of the only pictures ever taken of the back of Oola’s head, and she realized that everything she had been making was wrong. So, she destroyed it all that week before filming and managed to rebuild it all the week before. To add to that challenge, the costume was not done either.

“[The costume] should be the easiest thing in the world to make, but I didn’t know how to sew. Fashion and sewing is a foreign language to me. My model loves fashion [and sewing], and when I brought the costume to her to try on, she looked at me and said, ‘what is this?,'” Ali said.

Because Ali was unfamiliar with sewing, she did not have a sewing machine. Furthermore, no one could teach her, per the rules of the competition. So, she had to hand sew a pair of pants by herself in hopes that they would work. According to Ali, she sat for close to 12 hours sewing Oola’s pants, not even thinking about the video she had yet to make.

The story of the making of Ali’s video is one to show dedication and heart. According to Ali, after she had painted her model, they had to transport her in the rain to a location 20 minutes away. Once they arrived at the studio to shoot, the model took off her coat and boots, and they came to see that a lot of the paint was worn off by the rain and the clothes. Ali had minimal materials to do touch ups with, so they had to use what they had. Then, due to technical difficulties, they could not begin shooting until close to 2 a.m.

“I want to go to Cinema Makeup School because there is nothing else like it,” Ali said.