The Central Trend • May 11, 2017 • https://thecentraltrend.com/18023/showcase/singsational-will-be-the-place-to-be-on-thursday-night/

Singsational will be the place to be on Thursday night 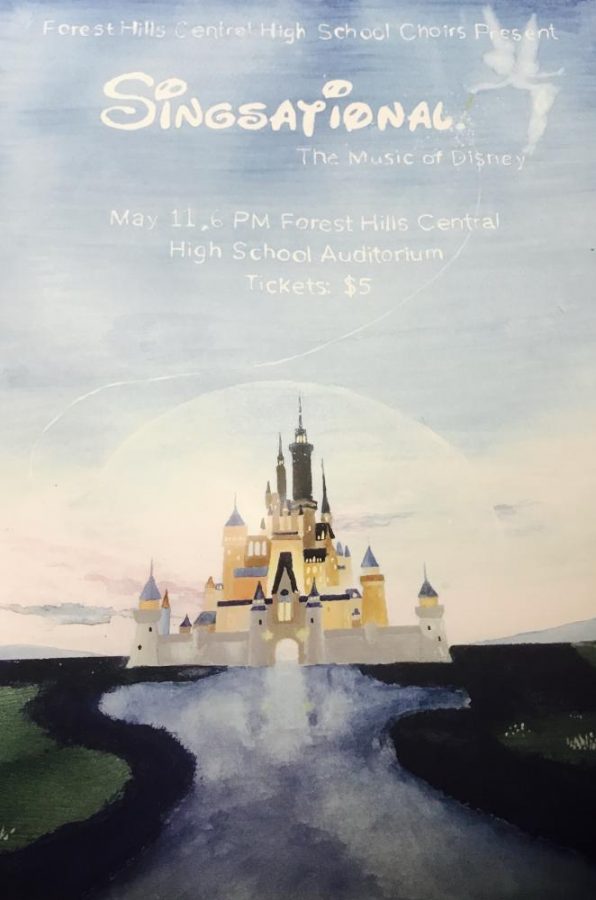 Covering every hallway and filling every classroom are midnight blue, watercolor posters of the classic Disney castle. The rich assortment of creams and blues catch the eyes of many, intriguing them to further investigate the masterpiece. Stamped above the perfect design are the bolded cloud words, “Singsational: The Music of Disney.” As beautiful as the posters are, the music and performances of Singsational are promised to be just as amazing, with its ingenious arrangements, familiar lyrics, and community-aimed audiences.

“[This year] is different because it’s the music that everyone loves and has grown up hearing,” sophomore and women’s chorus singer Ashlyn Fitch said. “It is also fun because [Singsational] is just FHC’s choirs, so it gives people a chance to really support their friends. I know people have been really working hard, so it’ll be really great to hear all that everyone can do.”

Throughout the many concerts the choirs have done, they have never ceased to impress their audiences as their enthusiastic and strong voices ring through the auditorium. However, Singsational, as the last concert of the year, aspires to do more than just simply amaze audiences. They aim to attract many members of the community to come to support the show and create final memories to wrap up the year.

“I would say that it’s a smaller concert because it is just our high school, which is really fun,” senior and chorale singer Paige Guikema said. “We kind of get to control what songs we get to sing, and it’s usually music that we’re more excited to sing about. It’s also a fundraiser for our choir, so I think it’s cool to get people to come out [and see Singsational], especially your friends.”

Singsational will be a night to remember, and that can be attributed to the buzzing energy radiating from the choirs, their hard work over the course of the last month and a half, and the undisputed passion for music and teaching from the director, Sean Ivory.

“The people in choir are really fun, and we laugh a lot,” Paige said. “It’s a really great way to start my day because it’s the first hour, and you get to sing first thing in the morning, which [I love]. And Mr. Ivory is the best, making it even more fun.”

Even after many years of teaching, Ivory still retains his love for music, and the students connect on a higher level with him because of how highly he regards his students.

“I really love that he puts his students’ well-being above anything else,” Ashlyn said. “He wants to make sure that you’re personally good and that you’re feeling good. He really cares about every student which is really sweet, and it makes it a really fun environment to be in.”

Choir, as described by many students, has boosted their confidence and become an open atmosphere where people feel welcomed and treasured by the community. In Ashlyn’s words, it has helped her to “learn more about herself and music.” Similarly, for Paige, choir has grown to be so deeply rooted in her life, and after Singsational, she’ll genuinely miss the choir program and the people in it.

“I am sad to be leaving, and it’s weird that [Singsational] is the seniors’ last concert,” senior Paige Guikema said. “We were just talking about how weird it is that things are coming to an end because [choir] has been such a big part of our lives for the four years that we’ve been at the high school.”

For seniors, Singsational will be a bittersweet moment; on the other hand, for others, this final performance will be an exciting way to end the year.

“Choir has given me a lot of great opportunities to perform,” Paige said. “It gave me a lot of confidence at my beginning of high school, and I am very grateful for that. And we’re hoping to sing well, obviously, and have a lot of fun. [I hope that] a lot of people will come, so our program can [benefit].”