The Central Trend • May 15, 2017 • https://thecentraltrend.com/18094/opinion/vinyl-theatres-origami-provides-the-perfect-prelude-to-summer-music/ 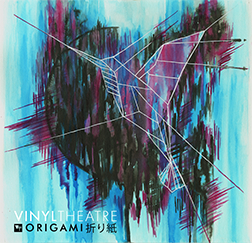 The end of the school year is creeping near, which means with each passing day FHC becomes more and more like a prison barricading students from the warm weather and freedom that summer brings. However, for students like myself who are itching for summer, Vinyl Theatre’s newest release, Origami, is a perfect prelude for warm weather, adventures, and freedom.

When I think of summer music, my mind jumps to upbeat and joyous songs filled with the blissful feeling of freedom that these warm months bring. Origami is filled with summery songs, yet still manages to ground an eager student who just wants summer. Songs such as “Speak My Mind” provide the perfect taste of freedom without making the realization of having multiple weeks of school utterly unbearable.

There are some songs, however, that are what I consider full-blown summer songs, like “My Fault” and “New Machines.” These songs are as refreshing as a breeze on a warm summer day– they provide a perfect intro to the upcoming warm months. “My Fault,” the first track on the album, kicks off the collection flawlessly with the edgy backbeats and the loud but clear vocals. It’s a song that exemplifies summer while somehow managing to fit impeccably into spring music.

This is the first release from Vinyl Theatre since 2014, with their previous album entitled Electrogram, providing similar sounds to their newest release. Electrogram, however, supplied music that is much more juvenile than the songs featured on Origami. The growth of the band is clearly chronicled when comparing the two albums, proving that in the three-year gap between releases Vinyl Theatre was hard at work maturing their sound.

While Vinyl Theatre’s music has matured since 2014, they share similar sounds to bands like Two Door Cinema Club and other indie-pop bands. The main similarities lie in the vocals; raspy, loud, and upbeat. Although Vinyl Theatre shares similarities to other indie-pop bands, there are unique aspects to their music primarily seen in their combination of hard-rock beats paired with the raspy indie vocals that characterize the genre.

Origami is the perfect album to transition from spring to summer, especially as spring fever spikes. Whether this album is used as a taste of summer while anxiously waiting for the real thing, or simply as high-quality music for day-to-day life, Vinyl Theatre does a phenomenal job at chronicling their growth as a band as well as generally producing good music. Summer may be almost upon us, but Origami makes spring feel like summer, which is something that no one will complain about.