The Central Trend • May 25, 2017 • https://thecentraltrend.com/18533/showcase/fhcs-annual-candlelight-ceremony-recognizes-the-accomplishments-of-the-class-of-2017/ 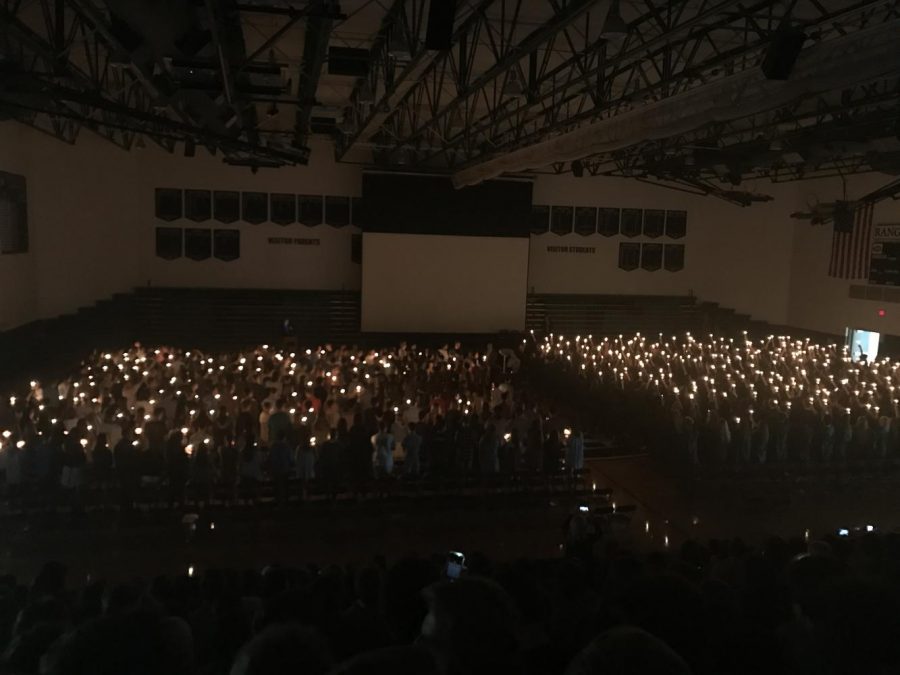 For years, AP US History teacher Steve Labenz has presented generations of graduating FHC students with commendations and awards before they graduate and continue onto the next stage of their lives.

As Labenz calls out the names of the recognized seniors, each one is acknowledged for their accomplishments. Surrounded by the entire school, these incredibly bittersweet moments often inspire remaining students to attain the same achievements as the graduating class.

This year was no different, as Labenz presented several members of the Class of 2017 with awards, distinctions, and accomplishments. FHC’s Candlelight Ceremony continues to be a memorable event to remember, reward, and recognize the senior class.

“I think a lot of kids like it because it’s an opportunity for them to be with their classmates one more time,” Labenz said. “A huge number of those kids will never see each other anymore. Because of this, for some of these kids, it is going to be a really emotional event.”

Although the Candlelight Ceremony is most definitely a part of FHC culture today, it has not been around as long as most students might think. The ceremony was only brought here by former principal Terry Urquhart in 2005. This ceremony was a tradition at Urquhart’s previous school and one that he brought with him to FHC.

The ceremony begins with the physical lighting of the candles. After lighting their junior counterpart’s candle, each senior blows out their own flame. This symbolic “passing of the torch” moment is one engraved in the mind of many, as the seniors pass down the position of “top dog” to the juniors.

“I really appreciate the recognition [the Candlelight Ceremony] gives the seniors,” counselor Kyle Perkins said. “It’s inspiring to see their accomplishments, and as a counselor, there’s some nostalgia to it too. Thinking back to the journey that each student has taken, it’s really unique to each of them. It gives me a lot of energy, and it really makes me want to do my job.”

Perkins is one of several staff members who feel this way about this ceremony. The lighting of the juniors’ candles from the seniors’ candles is often a time of reflection for many of the teachers who have taught the seniors at some point in their academic careers.

“You see these kids there, and you think to yourself, “we’re losing such a great student,'” Labenz said. “I only teach sophomores, but then I see these kids in the hall or at events, and it’s neat to see how they’ve advanced as students and as people. The biggest thing is seeing how they have all developed and turned into young people. It’s a sobering thought.”

Following the lighting of the candles, the bulk of the ceremony comes from the awards. Numerous awards are given out to a range of seniors. Interdepartmental awards, such as for biology, English, and math are handed out, as well as recognition for the military, Eagle Scouts, and other out of school programs.

“For me, the best part of the ceremony was seeing my friends receive recognition for their hard work,” senior Amytess Girgis said. “There are people who I have seen work, struggle, strive, and achieve throughout high school; although not all of them were necessarily given awards for that, it was cool to see some of my best friends up on stage and think of how far we’ve all come.”

The last portion of the Candlelight Ceremony is the highly-anticipated senior video. This year, it was directed by senior Jack Treiber and was a true encapsulation of the Class of 2017’s senior year. From Prom, football games, spirit weeks, assemblies, and everything in between, the senior video provided the perfect opportunity for the graduating class to reflect upon their senior year.

“I think it’s really important for the seniors to [use the senior video to] take some time to look back, reflect, and recognize what they’ve done and achieved over the past four years,” Perkins said. “Like, what these years have looked like, what they are proud of, and what they took ownership over. Maybe even in bigger ways, [like] how they want this to then guide or influence them going forward.”

“The ceremony is a simple example of FHC’s commitment to preparing the next man for what is to come,” senior class president Logan Vredenburg said. “Our teachers do a pretty spectacular job of setting students up for success. The kids at FHC are able to pass on their experiences and ideas to younger students in hopes that the next group of students will excel, much like how the seniors pass off their little flames to their junior counterparts.”