Students from Class of 2018 prepare for military involvement 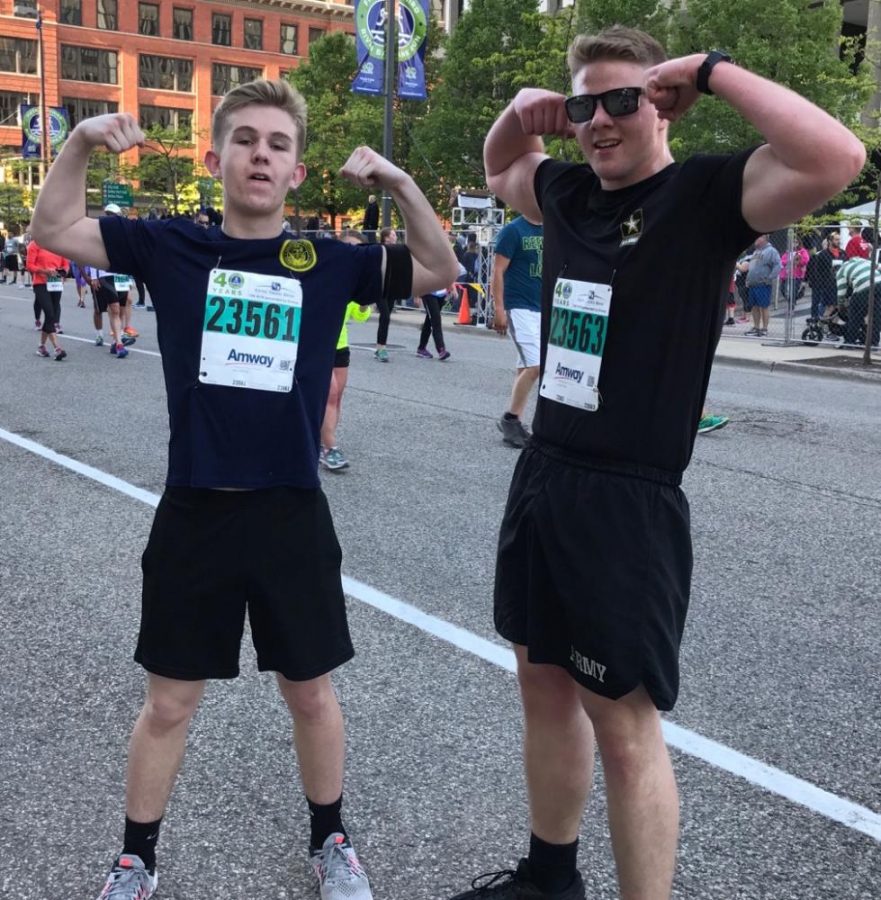 Junior Josh Sweeney is proud of his family’s history of military involvement. He is excited to be continuing the family tradition with his enlistment in the United States Army.

“I come from a long tradition of American warriors and I don’t take that lightly,” Josh said. “It’s something that’s just been in my family since the American Revolution and dates back to a great ancestor, Jacob Smiley, on my mother’s side of the family, [who] fought in the Battle of Bunker Hill. That has, of course, trickled down to my more immediate family.”

Serving his country has always been a goal of Josh’s. He has already been through the enlistment process and next year will go to basic training to begin his journey with the United States Army.

“[I am going into] the United States Army because it is the finest fighting force on God’s Green Earth,” Josh said. “[Going into the army] is a proud heritage that my family and I come from; most of my family is Army. My brother was in the 75th Ranger Regiment, and that is something I would like to do as well.”

Because of Josh’s family background and his true passion for serving, joining the army is more than a choice, it is what he is meant to do.

“It’s always been something that I wanted to do because I feel it’s something that I have been called to do,” Josh said, “both by my belief in faith, my family, and by the fact that I am physically able and willing to serve.”

After graduation, Josh will attend basic training at Fort Benning in Georgia. Following that, he will go in as an infantry recruit. Then, because of his plans of wanting to become an Army Ranger, he will continue his training further. It is also incredibly beneficial to him to have a family background in the military, so he can continue his plans with support.

“I have such admiration for people who want to go into the military who have had bad backgrounds. There are people whose parents might not be supportive, but they still very much want to go in,” Josh said. “My mom has had to sign those papers that released her sons three times. So it’s hard and emotionally taxing for her, and she has been very supportive. It is truly a gift.”

Josh is ready to get started training with the Army and is more than excited to have this opportunity.

“I’m just doing my part, I’m happy to do it,” Josh said. “I’m excited to start the next chapter of my life. I feel like I’m doing something that’s good.”

Instead of the Army, junior Adam Heneveld is starting his enlistment process with the United States Navy in about two weeks.

Unlike Josh, Adam does not have a lengthy family background of military involvement, but he still feels that he is being called to join the Navy.

“I’ve always had something for serving and protecting people,” Adam said. “It’s always something that I’ve wanted to do.”

Adam is prepared to risk his life for his country. Making the decision to enlist and serve is worth anything and everything that might come with it, to Adam.

“I’m nervous about not coming home at some point,” Adam said. “It kind of makes me nervous, but it’s definitely worth the sacrifice. I’m definitely willing to give the ultimate sacrifice for my country and be able to give back.”

Adam cares for the way our country runs and wants to serve to help protect the way we are able to live our lives in the United States.

“I think that one of the reasons why I do it is for all of the people next to me, serving with me, and all my friends back home, so they can live in peace and live out their normal lives,” Adam said.

Christian Donald is also prepared to serve our country. Christian is no longer a student at FHC, but he attended through mid-sophomore year. Christian finished out his education at Michigan Youth Challenge Academy, a military school, and has enlisted and begins his training in about two weeks.

“My mom was in the Navy, and my dad was also in the Navy as a Corpsman, which is the same job as what I have,” Christian said.

Christian is on the path of being a Corpsman, which involves serving alongside the Marines while being ready at all times to provide the medical assistance that is needed.

“You get EMT certified, but what I want to do is after EMT school, they have this thing called FMTB which is Field Medical Battalion Training, and it’s just a medic, pretty much,” Christian said. “Marines don’t have their own medical field, so they take Marines, or they take Navy Corpsman and make them into their medics, and that’s what I want to do.”

Josh, Adam, and Christian are only three of the students of the Class of 2018 that are ready to serve. Also enlisting are juniors Cullen Dodge and Nick Agrillo. Cullen is planning on joining the Navy with the goal of being a Navy Seal, alongside his friend Adam Heneveld. Nick has already enlisted in the Marine Corps.

“I’m going to have to endure a lot more pain and training to get where I want to be,” Josh said. “But in the end, it’s all going to be worth it.”