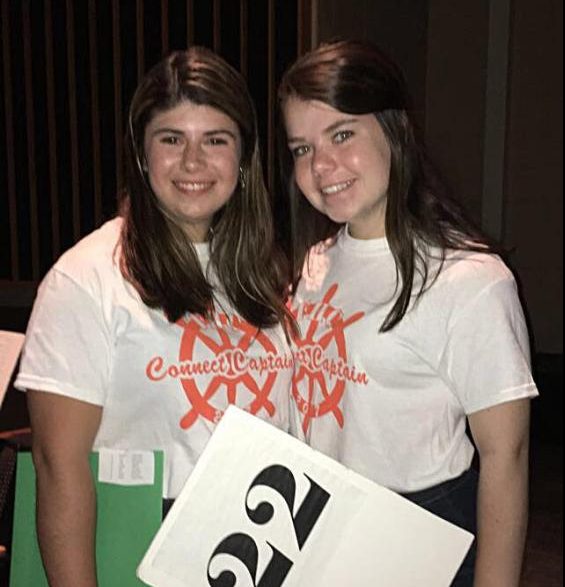 As a captain, my job was to lead a group of six to eight kids throughout the school. I had a co-captain, junior Megan Johnson. We first started off with “ice breakers” to get to know one another and make them all comfortable within the group. This really opened up the chance to talk with the group and open up right away. This activity would set the tone for how the rest of the day would turn out.

Next, we went to the gym for our “team building” portion of the visit. While in the gym, Megan and I played games with the group, such as Statues in the Park and Categories. Some of the other groups were inconspicuously watching nearby and asked to join in and play our games as well. This increased the comfort for the kids and allowed us to joke and laugh together. The kids began to be more interactive with each other and with Megan and me. One of the counselors, Rick Bolhuis, joined in on our games as well. The kids got to know him better and now had a face the would recognize, come the start of next year.

After we tired out Mr. Bolhuis, it was time for their very first lunch in the intimidating high school. We found a table to sit at, where we could all be together and talk amongst ourselves freely. I stayed sitting with the kids who brought their lunch, and Megan went with the kids who were buying a lunch and explained how the system works. As I was sitting with two of the girls, Ellie Field and Addison Whitten, we talked about what freshman year would look like for them.

“I am really excited for the dances,” Ellie said. “I like to get dressed up.”

I talked to the girls about Homecomings and Winterfests. I told them how much fun it is to find dresses, shoes, jewelry, paint your nails, and get your hair done. We then moved on to talking about possible fears of the high school.

Addison also asked if people use maps. I told her that when I was a freshman, I drew out my route for my schedule on maps with different colored markers. I told them they did not need to get that extensive in the slightest, but it was good to have an idea where your classes are. We all discussed which bathrooms are okay to use and which ones to avoid. We talked about the various sports and clubs. Some have said they have been to the theater shows and are eager to possibly audition this upcoming year, or if not audition, participate in crew-ing the show.

After lunch, we moved onto the student panel. This was where a few connect groups were all together in the auditorium. The captains sat on the stage, while the eighth graders were in the audience. We talked about anything and everything they would need to know as freshmen. They had the opportunity to ask us questions and receive answers they had been pondering about for quite some time.

After the student panel, Megan and I led our group on a complete tour of the school. We named some of the classrooms that they might possibly be in. We showed them where their lockers may be. We showed them a tour of the FX room and introduced them to Mr. Manders. We also introduced them to Mrs. Post, a math teacher they may have for Algebra 1. We guided them through all the ins and outs that the high school has to offer.
We ended the day back in the auditorium to watch the senior video from this year. Then, it was time to say our goodbyes and send them back to the middle school. I am excited to see some familiar faces as they come in next year to start their journey of high school.